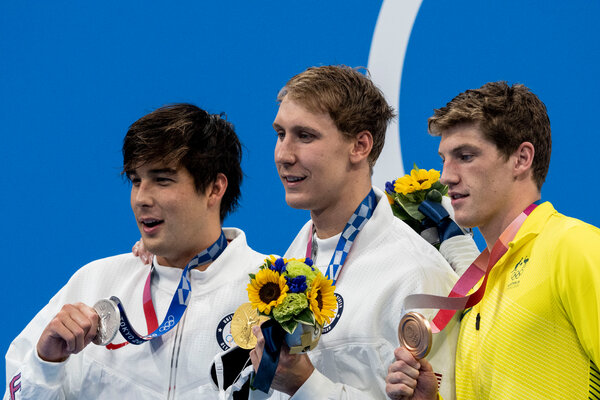 It is a quintessential Olympic moment. After every event, after the Olympic champion’s national anthem is player, the winners of the silver and bronze medals are welcomed to the top step of the medals stand. There, they pose — together with the winner — for a photograph.

And this year, it’s that last bit that has caused a problem, and a mid-Games rules change.

Worried that medal-winning athletes were openly violating strict coronavirus protocols by removing their masks and posing with fellow competitors after events, the International Olympic Committee on Sunday announced a modification to those ceremony procedures.

Starting Sunday, medalists were allowed to pose — briefly, and unmasked and socially distanced from their rivals — for photos.

The victory ceremony protocol was adapted, the I.O.C. said, “to allow athletes to have an image for the media that captures their faces and their emotions during a unique moment in their sporting career, as well as to celebrate the achievements of all the medalists together.”

But they, and the photographers, need to be quick about it. Under the new rules, the brief window for photos is not to exceed 30 seconds, and “at no point during this limited time should the athletes be invited to join each other on the gold-medal platform. They must remain on their dedicated platform respecting the original distance.”

Only after a signal from an Olympic official will the medalists be allowed to join the winner on the highest podium for a second set of images. Those, the I.O.C. said, must take place with masks on.