A mint condition Mickey Mantle baseball card sold for a mint, bringing $US12.6 million ($18.4 million) at auction, the most ever paid in the sports memorabilia market.

The rare card passed the record $US9.3 million a buyer paid for a jersey worn by Diego Maradona when he scored the “Hand of God” goal in the 1986 FIFA World Cup. It passed the $US7.25 million that a century-old Honus Wagner baseball card recently fetched in a private sale and the nearly $US6.2 million paid for the heavyweight boxing belt reclaimed by Muhammad Ali in the 1974 “Rumble in the Jungle”. 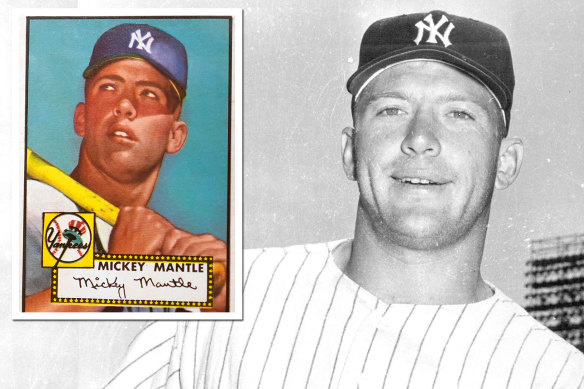 Even before bidding at Heritage Auctions in Dallas began on Sunday, it was anticipated that the Mantle card would set a record because of its excellent condition, legendary New York Yankees subject, its rarity, a market in which sports memorabilia is a hedge against inflation, and investors becoming active again after the pandemic.

“There’s only so much Netflix and Tiger King people could watch, so, you know, they were getting back into hobbies, and clearly sports collecting was a part of that,” Chris Ivy, the director of sports auctions at Heritage Auctions, told the Associated Press.

The 1952 Mantle card brought a tidy profit for Anthony Giordano, the president of a recycling and waste management company in New Jersey, who bought it for $US50,000 at a New York City show in 1991. He told The Washington Post he could sense a good deal. The buyer is not yet known.

Mantle played all 18 seasons of his career with the Yankees, won seven World Series titles and was a three-time American League MVP. The switch-hitting centre fielder was inducted to the Hall of Fame in 1974, his first year of eligibility. Mantle died in 1995.

Joe Orlando, recently named executive vice president at Heritage Auctions, told The Post that, while the card was extremely valuable on its own, an accompanying letter elevated its value.

When Giordano purchased the 1952 Topps card from Alan Rosen, a card dealer nicknamed “Mr Mint”, Rosen praised its condition and Giordano asked him to put that in writing. Using his “Mr Mint” letterhead, Rosen did just that, describing the card as, “in my estimation the finest known example in the world”.

That piece of paper enhanced the value of the card, which has never been owned by any members of the Yankees legend’s family. David Mantle, the slugger’s oldest living son, said he passed on the chance to buy another that was in decent condition for $US5000 in the 1980s.

Mantle told Dallas TV station WFAA that he didn’t have the money at the time and didn’t want to ask his father for a loan.

“It would have been nice to have one in the family,” he said.