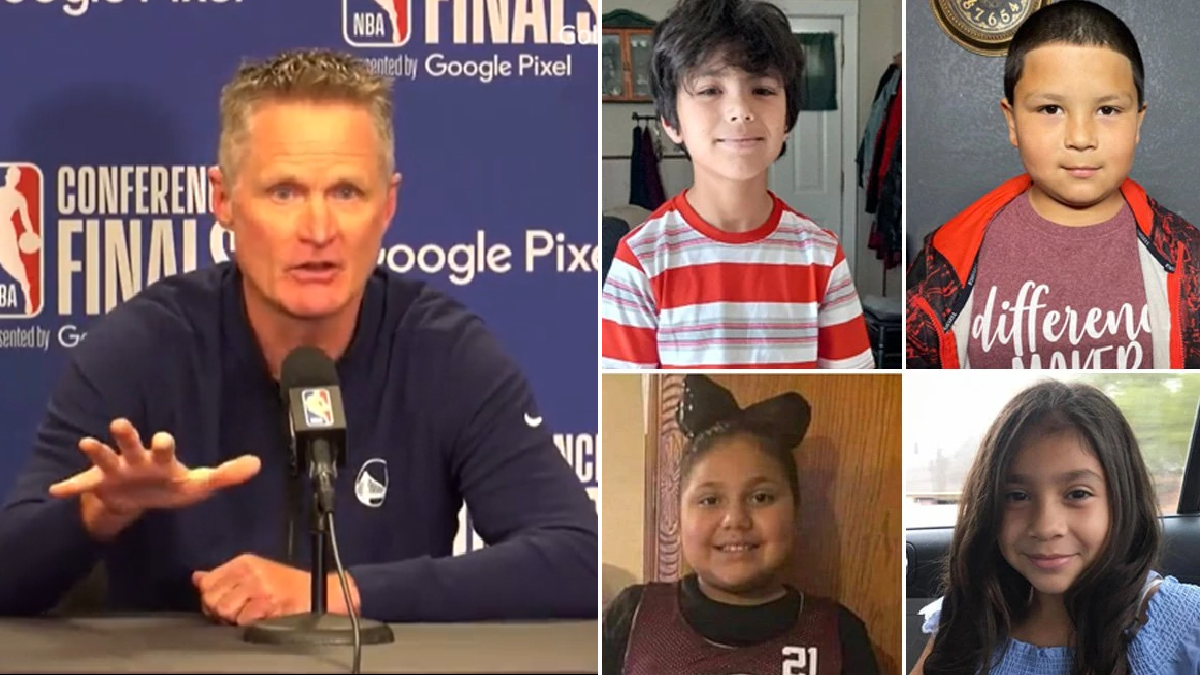 NBA legend Steve Kerr refused to talk about basketball before his team’s play-off match with Dallas Mavericks on Tuesday, instead delivering a passionate speech condemning gun violence in the United States of America.

Kerr’s emotional speech came after nineteen children and two adults died in a shooting at a primary school in south Texas.

Ramos, who was killed by law enforcement, had a handgun, an AR-15 semi-automatic rifle and high-capacity magazines, according to investigators.

Eight-time NBA champion Kerr, who is a long-time advocate of gun control, said: ‘When are we going to do something? I’m tired.

Kerr, who is the head coach of Golden State Warriors, has repeatedly supported a bill that would require tighter background checks on those buying guns. The bill was passed in 2021 but did not get to the Senate.

NBA star Steph Curry praised his manager Kerr after the powerful press conference and said he ‘can’t even imagine the pain’ the families’ are going through.

‘I appreciate his [Kerr] leadership. It was on everyone’s mind coming into the game,’ Curry said.

‘I’ve got kids, send them to school every day, drop them off, and you feel for the parents that are going through what they’re going through. I can’t even imagine the pain.

We are heartbroken by this afternoonâs tragic events in Uvalde as we mourn alongside our neighbors in Texas. To the victims, their families and the entire Uvalde community, you are held close to our hearts today and in the weeks to come.

Breaks my heart hearing this news, no parent should ever have to lose there child. Praying for the families of those kids and the teacher ðð½â¤ï¸â¦ this is devastating

ðâ¤ï¸âð©¹Uvalde, Texas. The unthinkable and unimaginable. As I look at my daughter my heart is hurting for all the lives lost and their loved ones. A parents worst nightmare. Enough is enough. No more gun violence, no more terrorism. This is sickening.

‘For coach to come up here and say what he said – every word that he said was powerful, was meaningful. I accept that challenge to try to use my voice and platform to help hopefully make change.

‘You could tell what it meant to him to come up in front of ya’ll and use this microphone to say what he said. So I appreciate his leadership on that.’

LeBron James, meanwhile, wrote on social media: ‘My thoughts and prayers goes out to the families of love ones loss & injured at Robb Elementary School in Uvalde, TX!

‘Like when is enough enough man!!! These are kids and we keep putting them in harms way at school. Like seriously AT SCHOOL where its suppose to be the safest!’

Kerr, 56, won five NBA titles as a player – three with the Chicago Bulls and two with the San Antonio Spurs – and has led the Warriors to three titles as head coach.