PORTO, Portugal — Another attack had broken down, another minute had passed, and by now there was just a hint of panic in Kyle Walker’s eyes. The Champions League title was slipping away. And so he did what he has been conditioned to do these past five years. He turned to the place that always gives him the answers.

As Chelsea dallied over taking a goal kick, hoping to see a few more precious seconds ebb away as it closed out its victory, Walker and Manchester City’s coach, Pep Guardiola, held an impromptu summit on the touchline. It was not hard to work out the dynamic. Walker wanted to know what to do. What had Guardiola seen? Where was the breach in the line? How did they rescue this?

Guardiola responded with a torrent of instructions, as he always does. He is never short of ideas. Ordinarily, he passes them on to one or other of his fullbacks — the closest players to him — and they diffuse them through the rest of the team. This time, though, was different.

Walker could see Guardiola’s lips moving. He could hear the words coming out, just about, above the din of Chelsea’s jubilant fans. But there was a look of blank incomprehension on his face, as if Guardiola had accidentally addressed him in Catalan or issued his instructions as a rap. 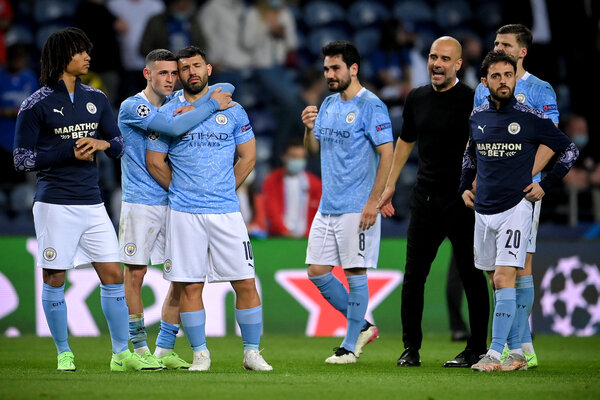 Walker furrowed his brow and stared, hard, at his coach, in a vain attempt to make it all make sense. Whether what Guardiola said got through, whether it was put into practice or not, a couple of moments later Walker was back at the touchline, this time with the ball in his hands. He took a couple of steps, and then launched it long, deep into the penalty area. A beat later, the same thing played out.

Manchester City, that byword for sophistication and planning and command under Guardiola, the outstanding strategist of his generation, had resorted to soccer’s final roll of the dice, its last resort for the damned: the long throw-in.

In the biggest game in the club’s history, in his own long-awaited return to the Champions League final, the system that Guardiola has so obsessively, so painstakingly coded into his players’ double helixes for half a decade had not just failed. It had broken down completely.

There is a reason that, in times of trouble, Manchester City’s players seek the counsel of the bench. For all that Guardiola’s teams are often characterized as freewheeling, expressive, adventurous, the reality is — and this is not a criticism — the contrary. Manchester City’s great strength is not its pioneer spirit. It is that it has the most detailed map.

Or, rather, Guardiola does. Much of what makes City so brilliant is not spontaneous, off-the-cuff virtuosity. It has all been trained and honed and perfected. Those slick interchanges of passing, all of the players darting into precise pockets of space to unpick the fabric of a massed defense? That is not improvisation. It is programming.

And so when things go awry, when the plan does not seem to be working, the reflex of Guardiola’s players is to ask for further directions. It is hard to watch City for any period of time and not notice it. It is a reflex now: When some issue arises, the first instinct is always to look to the bench, to be given an update. There is no real room for personal interpretation. Under Guardiola, the system is king, and Guardiola is the system.

He is not unique in that. Soccer in the 21st century is a cult of the supermanager: not only Guardiola but José Mourinho, Jürgen Klopp and Antonio Conte, Julian Nagelsmann and Mauricio Pochettino and Thomas Tuchel, the freshly minted champion of Europe.

They have diverse approaches and distinct philosophies, but they are united by a core belief: that at its heart, soccer is a game of competing systems. What defines the identity of the victor and the vanquished are choreographed movements and passing patterns and detailed tactics of each team. They all believe that it is the coach who has agency, that whoever has the best system will win.

And yet that does not quite paint the whole picture. It would be perfectly valid to analyze Chelsea’s slender and yet convincing victory in Porto on Saturday as a tale of two systems: the one inculcated by Tuchel, brightly conceived and adroitly executed, overcoming the one unexpectedly — and to some extent inexplicably — adopted by Guardiola.

Rather than stand by the approach that had made City all but untouchable in England since January, Guardiola chose to dispense with the services of a holding midfield player. Instead, he played Ilkay Gundogan in that role, with an array of creative, ball-playing playmakers around him.

The temptation is to assess that call in psychological terms. This was Guardiola second-guessing himself, as he tends to in this competition, because he is so obsessed with winning it. Or, conversely, it was Guardiola distilling his beliefs down to their purest essence, trying to use the grandest stage of all to showcase his latest idea, the four-dimensional chess move of the boss-level supercoach.

In all likelihood, the rationale was probably more technical. Guardiola expected Tuchel to sit back and defend, which would have made a holding midfielder an unnecessary encumbrance. Instead, he would need more players who could pick their way through Chelsea’s back line. It was, if one sees the game as a struggle between systems, the logical move.

The problem is that the game is not a struggle between systems. Or, at least, that is not all it is. On a more fundamental level, a game is also a struggle between humans: a physiological one, a psychological one, an intensely and intimately personal one. It is an examination of your fitness and your talent, your reactions and resolve. Chelsea’s system might have been superior. But so too, crucially, were its individuals.

Not simply because, where City’s players seemed diminished by the occasion, driven to a frenzy by their desperation to deliver the club its self-appointed destiny, Chelsea’s appeared to be inspired by it.

Reece James and Mason Mount, fresh-faced and locally reared, improved with every passing minute. Kai Havertz, the goal scorer, gave a statement performance, one that warranted his captain César Azpilicueta’s assertion that he will go on to be a “superstar.” Jorginho seemed unruffled. Antonio Rüdiger was nothing but ruffle.

But more significant still was the fact that while City’s players had to turn to the bench to solve their problems, Chelsea had someone on the field to do it for them. Arsène Wenger was probably underselling it when he described N’Golo Kanté’s performance as “unbelievable.”

With metronomic, almost eerie regularity, City built attacks only to find out that at the key moment, Kanté was there, in just the right place to win a tackle, at just the right angle to block a pass, at just the right time to interrupt the plan. At time, it felt as if someone had passed Kanté a script. He did not wait for instruction from the side. He just went to where the danger was, and eliminated it.

Kanté was, in his own way, no less decisive here than Lionel Messi was in the 2009 and 2011 finals, or Cristiano Ronaldo was in 2014. The fact he is still pigeonholed as a holding midfielder means this will not be remembered as “the Kanté final,” but it would hardly be unwarranted.

But to focus exclusively on his destructive capabilities, formidable though they are, is to do Kanté a disservice. He was also, often, the one who led Chelsea’s counterattacks. He determined the shape of the midfield. His passing helped to destabilize City’s defense. For a few minutes in the first half, he did a passable impression of Frank Lampard, turning his hand to breaking into the City penalty area, timing his run late.

He did what great midfielders do, and shape-shifted as the flow of the game demanded. No wonder, as tends to happen with Kanté, a meme appeared at one point, detailing the great midfield threesomes of the recent past: Barcelona’s Xavi, Andres Iniesta and Sergio Busquets; Real Madrid’s Casemiro, Toni Kroos and Luka Modric; and Kanté, all by himself.

That was, in the end, the difference on Saturday night. One team had Kanté on it, and the other did not. Perhaps there is some system that Guardiola could have conjured to negate him or to bypass him, but it is not immediately clear what form that would take.

Even in the era of the supercoach, it is not always the finer tactical details alone that explain a result. The system is not always king. A game can be defined by ideas, but it can also be defined by people. And when it is, the visionaries on the sideline do not — cannot — have all the answers, because there are some things that do not appear on maps, no matter how finely drawn.