There are multiple ways to piece together a winning a 400m freestyle race. The event is long enough for frontrunners to force the pace and break the hearts of those in the chasing pack, or for others to sit off the lead, conserve pockets of energy and rattle home like a runaway train over the final two laps.

There are just as many ways to lose. Contract white-line fever and you can spend valuable physical and emotional capital at the wrong end of the contest. If you mistime your final surge, or fail to bound off the wall at the ultimate turn, all the back-end speed in the world won’t help if someone else clings on to touch the wall first. 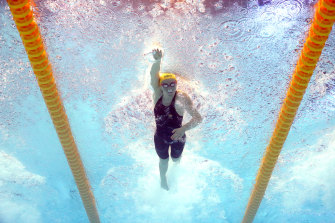 Ariarne Titmus is an expert at timing her run in the 400m freestyle.Credit:Getty

Katie Ledecky, a five-time Olympic champion, has almost always favoured the first option when it comes to her favoured method of dispatching rivals. When she silenced an expectant crowd in 2012 as a fearless 15-year-old in London, she went to the front in the 800m freestyle final in the first lap and was never headed, rattling off splits that Australian commentators Bruce McAvaney and Nicole Livingston thought impossible to sustain.

Through her sheer dominance of the distance events – the 400m, 800m and now the 1500m, a new Olympic event for women – the American has seen more clear water than perhaps any other elite swimmer in history. When she breathes, she has been accustomed to looking to each side, seeing vacant lanes.

With the emergence of Australia’s Ariarne Titmus in the 200m and 400m, that paradigm has shifted. And it must if the 20-year-old Australian is to rise to the occasion in Tokyo, because to let Ledecky dictate terms in the 400m is to gift wrap another gold medal for the Team USA headliner.

More than anything, Titmus and her team, including boundlessly effervescent coach Dean Boxall, want to make sure Ledecky knows she is going to be in a race. From there, it will become a battle of wills between the two female freestyle titans of the Olympic pool. May the best racer win.

Much has been written about their 400m match race since Titmus stunned Ledecky to take gold in the 400m final at the FINA World Championships in 2019. Ledecky was ill for that meet, spending hours in emergency at one point, but never before had she been overhauled in the final lap with such authority. She looked … mortal.

But what will their race in Tokyo look like? Will Ledecky continue to take it out fast and this time hope to hold off Titmus, or will the Australian pour on the pressure and hope to once again be the one left standing at the finish?

The mental gymnastics from both camps have been as interesting as any race plan. Ledecky, as she has always done, gives away almost nothing when it comes to her thoughts on major rivals. Her habit of rarely acknowledging Titmus has been interpreted as arrogance in some quarters, yet it points to an inward-looking champion who considers only how to pry the best out of herself at major meets. 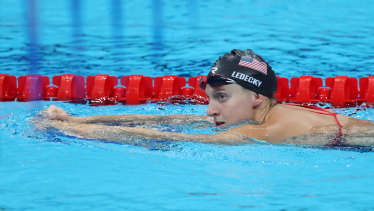 Katie Ledecky warms up in Tokyo.Credit:Getty

Titmus has been respectful and reverent, yet is unfailingly ambitious in terms of her goals. And so it is left to Boxall to say out loud what everyone already knows: Ledecky remains the queen but Titmus is coming for the throne.

“We just have to make sure that Katie understands there is a girl who is swimming fast and she will be right there. She knows that there is a kid from Australia who, if she performs well, will give her one hell of a race,” Boxall said.

“Hopefully they can meet each other on the last lap and see what happens. There’s a lot of memories waiting to be created.”

From head coach Rohan Taylor down, Swimming Australia has been going out of its way to ensure Titmus is portrayed as the clear underdog against the American champion. On times alone, it seems a stretch. Her 1:53.09s 200m time from trials was the second-fastest of all time, while her 3:56.9s in the 400m is in a region Ledecky hasn’t visited in years.

“Hopefully they can meet each other on the last lap and see what happens. There’s a lot of memories waiting to be created.”

Is it all mind games? Partly, but there are blindingly obvious reasons to be wary. Ledecky seems capable of anything in the water and if one possible scenario shows her to be a slightly lesser version of her invincible Rio self, then another is the second coming of a swimming icon as she fends off the worthiest challenger she has ever encountered.

“Other than the 200m, Arnie is still behind her,” Boxall points out. “She [Ledecky] goes there as the Olympic champion, her third Games, she’s regarded as the greatest female swimmer of them all. Arnie is going 3:56.9 but she’s not faster than Katie. That’s just the truth.

“But we’re not going there concerned about times. The Olympics is about racing. But what those times (from trials) do is give her confidence that she can swim fast and she knows she has put herself in a very good position to have a real go at this now.”

Titmus has already shown herself to be a big-race performer and has learned to tame her nerves, or at least bend them in a direction that may be of some use. When she occasionally messages her coach before a major race confessing to be feeling on edge, his reply is always: “Good.” 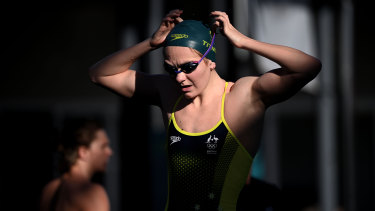 “She has an unbelievable mindset. You just have to make sure she gets there and then let her go … she can get a bit floaty during the season. But I know when I get a good block of training from her, she’s unbelievable. Unbelievable. She’s just locked in,” Boxall said.

“But she actually gets nervous and every time she’s nervous, that’s when she performs well. She’s learned to use that energy so well, she knows her body is getting ready to perform at the optimal level.”

Her road to Tokyo has been punctuated by injury, to the point there were whispers around pool deck before the Australian trials that her shoulder concern had been more serious than anyone had cared to admit. Titmus crushed that train of thought with her performances but nursing her through rehab was not without its challenges.

She has a voracious diet for work and training and until that point, had been medically bulletproof. When she did encounter the first injury setback of her entire youth, Boxall said it was if she was a ‘toddler’, having no idea about how to manage the process of rehabilitation.

“She’s fine now but at the beginning, she was beyond a novice. She was a toddler. Emotionally, she wasn’t in charge of it, she just didn’t have any experience,” Boxall said. “We had a lot of stages to get through to get to where we are.”

Ledecky will swim in heat three of the 400m freestyle on Sunday night (9.18pm AEST) in Tokyo, with Titmus in heat four (9.24pm). The final will be on Monday (12.20pm). Two great swimming nations will stand still to watch every stroke.