The last time Roger Federer played in Geneva, 80,000 fans cheered him on at work over three days, filling the Palexpo Arena to the brim as he led Team Europe to victory in the Laver Cup.

On Tuesday, only 100 fans were in attendance at the cozy Tennis Club de Genève as Federer faced off against Pablo Andújar.

So much is different now as the world and the tennis tour continue to grapple with the pandemic, and as Federer, 39, is coming off his latest long layoff.

This was his first match since March 11 and only his second tournament since February 2020. The rust showed at times, with mis-hits and missed first serves under duress, but Federer also flicked a fabulous forehand passing shot to break serve and zipped through his service games for much of the second and third sets.

Until Tuesday Andújar, a 35-year-old Spanish veteran, had never faced Federer, but with the match on the line, he was the more precise and reliable player. Andújar swept the last four games on the red clay to win, 6-4, 4-6, 6-4, in the round of 16 at the Geneva Open.

“He deserved it because he was more stable than me,” Federer said.

At the start and down the stretch, Federer was too often on the defensive, too often reactive instead of proactive.

“Roger looked healthy, fit, and moved fine for his first match on clay,” said Darren Cahill, the veteran coach and ESPN analyst. “He just looked very rusty against a guy who knows his way around a clay court really well.”

Andújar also knows as much about comebacks as Federer does at this stage. Andújar has worked his way back from multiple elbow surgeries, just as Federer, once remarkably injury-free, has had to work his way back from three knee surgeries — the first in 2016 and two more in 2020.

He came back in 2017 to win three more majors and regain the No. 1 ranking, but another renaissance is far from guaranteed.

Federer has endured long enough to see his most prestigious records matched or broken. During his layoff from February 2020 to March 2021, Rafael Nadal equaled him by winning a 20th Grand Slam singles title, and Novak Djokovic surpassed him by holding the No. 1 spot for a 311th week.

Federer, who has trained with and mentored Stricker in Dubai, could not follow Stricker’s lead, even though Andújar is ranked 75th in the world, had not beaten a top-10 player in six years and had lost in the first round in four of his last five tournaments.

Federer, ranked eighth, had Andújar on the ropes and let him escape, playing a shaky service game at 4-3 in the third and then dropping his serve again at 4-5 after saving two match points. 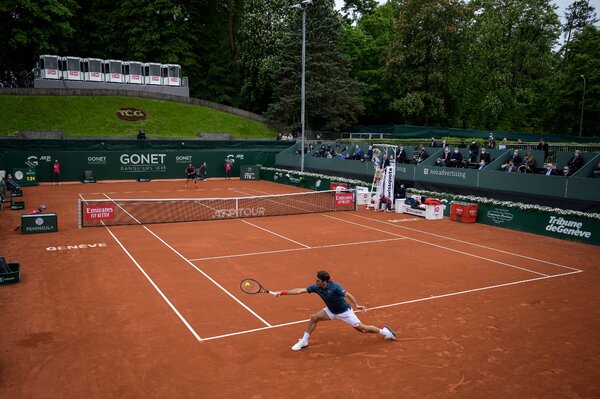 The fourth point of the final game was telling. He hit a strong, high-kicking serve that earned a short return. The court was wide open, but Federer slapped a tight, midcourt forehand into the net, and later he missed two more whipping forehands off deep shots on the final two points.

“I started really hitting through my shots for a while, but at the same time I told myself that it was going to be difficult to keep that up for two sets,” Federer said. “And that’s down to a lack of confidence. I couldn’t say to myself, ‘Yes, you’re going to close out this match.’”

Even for all-time greats, confidence is essential and ephemeral. Federer looked slightly apologetic as he shook hands and exchanged post-match pleasantries with Andújar. He had not expected to be in top form this week, but he had hoped to play more than one match on home clay. Only 100 spectators were allowed on site, but a few more than that were watching in person. Some Swiss fans had managed to sneak into the woods next to the club.

What is clear is that the French Open, which begins on the red clay in Paris on May 30, is not his main goal. The big target is Wimbledon, which begins on June 28 at the All England Club, the grassy tennis temple where he has won eight titles and where he held two match points in the 2019 final before losing to Novak Djokovic.

“I think Paris is going to be really challenging for him,” Annacone said. “But if the body sustains itself and maintains good health and he gets enough reps, Roger’s not going to go into the grass season not thinking he can win Wimbledon. He’ll say all the right stuff, but in his heart of hearts, he knows he can win that tournament. But the less dominant you are, the more that aura of invincibility starts to dissipate just a tad, and it only needs to dissipate a tad to make a difference. The locker room antenna is up.”

It is not up just for Federer. Tuesday was a tough day on clay all around for 39-year-old tennis legends. Serena Williams, returning to action this month after not playing since February, struggled in Parma, Italy, at the same time Federer was struggling in Geneva.

Williams lost, 7-6 (4), 6-2, in the second round to the 68th-ranked Katerina Siniakova, double-faulting at key moments and dropping 16 of the last 18 points.

It was striking to see two of the planet’s main attractions performing in such small venues: Think Bruce Springsteen or Lady Gaga playing your local bar. But Federer and Williams, so often in sync, are serious about working their way back one more time against the odds and the ticking clock.

“The expectations for both of them are so rough,” Annacone said. “As soon as there’s a loss, there are all these sweeping conclusions. They are at the peril of their own brand, so to speak. They can definitely still be great, but I’ll be interested to see if they can stay great for a whole match, a whole tournament.”