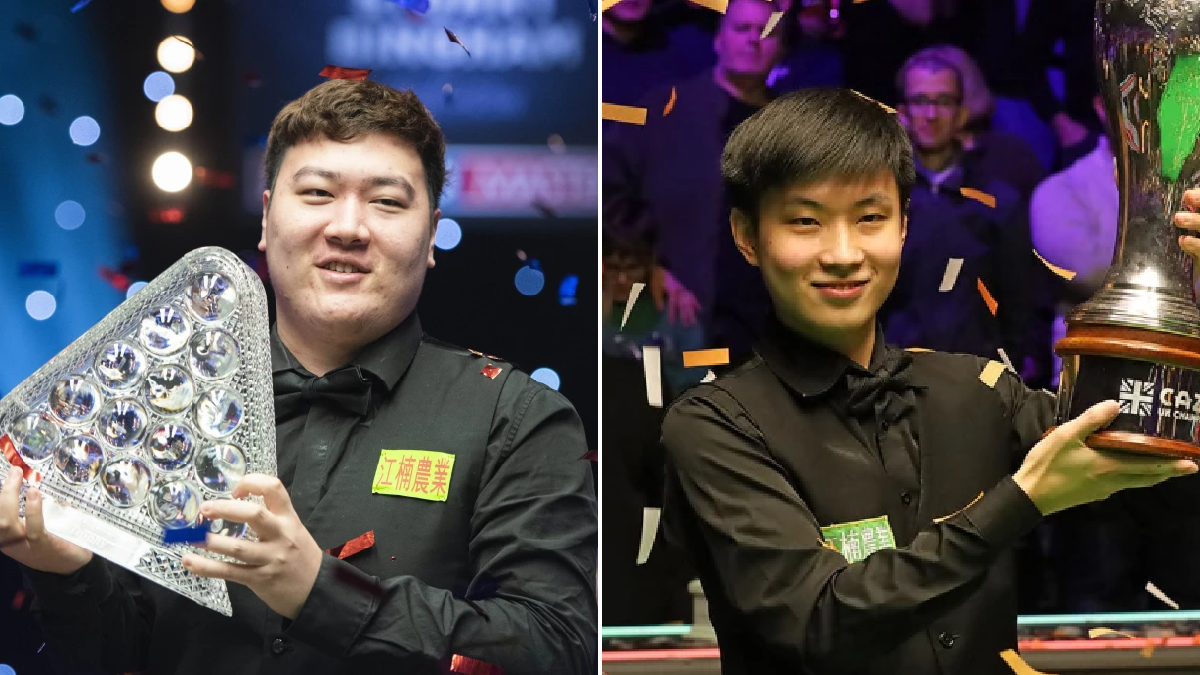 In the coming days we will see arguably the two brightest young talents in snooker take on two of the greatest to ever pick up a cue on one of the sport’s grandest stages. Is there really a changing of the guard on the baize? The Masters will help us decide.

Snooker has been edging further and further away from being a young man’s game in recent years, with six of the 16 men heading to the Masters in their forties and eight more having celebrated their 30th birthdays.

The only two of the 16 who might get asked for ID in the pub are defending champion Yan Bingtao, 21, and reigning UK champion Zhao Xintong, 24. The young Chinese stars that caused big upsets over the last year to claim two of the sport’s greatest titles.

Thanks to their success, and the recent superb form of 26-year-old Belgian star Luca Brecel, there has been talk that the balance is finally starting to tip back towards the younger generation and away from the veterans that have dominated the upper echelons of the rankings for 25 years.

Two of those men wait for Yan and Zhao at Alexandra Palace, with the Masters champ taking on Mark Williams and the UK king facing John Higgins.

Yan won his Masters title behind closed doors in Milton Keynes last year and will be entering an entirely different atmosphere in front of a full and rowdy Ally Pally on Sunday as defending champion.

Will the Tiger earn his stripes once again by overcoming that pressure against the wiliest of old foxes? Williams will not bat an eyelid at the big stage – hopefully he won’t close them all together again – and having won his 24th ranking title this season he still has the quality to beat anyone at 46 years old.

Higgins is the same age as the Welshman and has been in even better form, despite not lifting any silverware since the Players Championship in February.

The Wizard of Wishaw has been to four finals already this season, and although he has lost them all, his level of consistency has been remarkable.

Zhao has been anything but consistent in his career so far, with the Cyclone storming to victory at the UK almost completely out of nowhere, competing in and winning the only final he has ever played in.

If he can topple the Wizard at Alexandra Palace then the Cyclone will look a lot more like a lasting disaster for the other top players rather than a brief but destructive gust through York.

The third, and most famous, member of the Class of 92 also faces the challenge of a younger man on his way up in the game rather than down, but one that is more illustrative of the lack of guard changing on the baize in recent years.

Jack Lisowski has the task of downing Ronnie O’Sullivan at the Masters, something that would go down as one of the most significant wins of his career so far, despite that career already lasting over a decade.

At 30, Jackpot is still seen as one of the exciting young players in the sport, yet to claim a ranking title but with most onlookers expecting one or many more to come.

Rarely in sport would someone in their fourth decade be viewed as a youthful hopeful, but such has been the lack of teenage talent in recent years that the likes of Lisowski, Judd Trump and Kyren Wilson have held onto their ‘young player’ tags far longer than they should have.

The emergence of Yan and Zhao should finally remove the label of youth from their elders, but they will have to start beating the seasoned campaigners on a regular basis for a changing of the guard to really take hold.

WPBSA chairman Jason Ferguson does not think we are seeing that change just yet, with the veterans still too good and the next big wave of talent not quite ready to take over.

‘I think we’ve got a while yet,’ Ferguson told Metro.co.uk. ‘I don’t think we’re quite there yet, but it is coming.

‘I always look back over the years, people saying, “This game’s finished when Alex Higgins finishes” and then Jimmy White came along. Then the same thing about Jimmy stopping but Ronnie O’Sullivan came along.

‘There’ll always be new stars and new talent coming through and it is coming. There are young players coming through but I think the next big wave is a little bit young at the moment.

‘I think what I see in snooker is how people’s minds mature and become so mentally strong over a long period of time. John Higgins is just incredible, mentally unbelievable. Mark Williams has still got incredible timing, incredible delicate touch, they’re just not showing any age at all.

‘I think they’ve got a few years yet, these boys, but they aren’t going to be around forever.’

Former world champion Shaun Murphy, who turns 40 this year, is also not sure about any guard changing just yet, and doesn’t think it will come until the fabled trio of O’Sullivan, Higgins and Williams put away their cues for good.

‘I think that’s something I hear quite a lot when you see newer players coming through,’ Murphy told Metro.co.uk.

‘”Changing of the guard” has been said for donkey’s years. I’m not sure the guard will fully have changed until the Class of 92 will leave the rest of us alone.

‘When are they going to retire?’ Murphy laughed. ‘Can we throw a big party for them? I feel like they’ve outstayed their welcome, can we get them a nice carriage clock or something?

‘I’m not sure the guard will have changed fully until those guys leave. But it’s great for the game when somebody like Luca Brecel starts showing his full potential, obviously Xintong winning the UK is massive for the sport, not just for him, but in terms of growth in other parts of the world.

‘If we weren’t in a pandemic, I’m sure we’d have seen an explosion of interest again in the Far East. Hopefully that momentum will last when we come out of what has been a terrible two years.’

The Magician knows as well as anyone how tricky it is to play the likes of Williams and Higgins on the big stages, but he has seen what Zhao can do, not just at the UK Championship, but this week at the Championship League when he played eight matches and won the lot.

Murphy won the UK himself back in 2008 and knows just how good Zhao will be feeling going into the sternest of tests against Higgins at Ally Pally.

‘That’s the acid test, two of the best players of all time will put these two lads through their paces and we’ll get to see,’ said Murphy.

‘If the way Xintong has started this year is anything to go by, in the Championship League, then it looks like there’s more of the same to come.

‘When you win a big tournament like the UK you feel like you’re walking on water, you can clear up from anywhere, nothing’s beyond your reach. I hope he rides that wave for as long as he possibly can because eventually that momentum will end, so I hope he enjoys it because it’s a very special feeling.’

It will be another very special feeling for the hugely talented twenty-somethings if they can oust the legends from the Palace and start to convince a few more people that a change really is coming.

The Masters first round draw and schedule