Sydney to Hobart crews are continuing to make the heartbreaking call to retire from the race in mass numbers as race leader Black Jack hurtles towards the finish line.

Black Jack is now just 135.2 nautical miles away from the finish line with rival LawConnect trailing in second by just over a mile.

In what is shaping up to be a tight sprint to River Derwent between first and second place, super maxi Scallywag has lost pace following some early sail drama but remains in third.

Stefan Racing, in fourth position, is hoping to capitalise on Scallywag’s technical issues despite being a smaller boat at 80 feet.

“We keep up with the 100-footers except when close reaching. When the breeze drops down it will be interesting to see who makes it across and who doesn’t.”

Just 52 of the 88 boats who left Sydney are still racing with a number of boats now limping to Hobart after retirement.

Most recently, the 36th boat to retire was two-handed boat Rogue Wave who was forced to pull out of the race on Tuesday morning due to boat damage.

It marks the seventh two-handed boat to pull out of the race, with just 10 left out of the 17 entrants in the division.

This year’s race marks the first time two-handed boats have been allowed in the Sydney to Hobart with the vessels crewed by just two people. 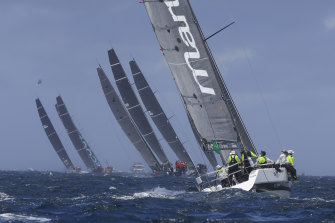 The finish line of the Sydney to Hobart is fast approaching. Credit:Getty

Maverick was the 34th boat to retire and the sixth two-handed entry to do so after sustaining starboard rudder damage after hitting something in the ocean.

“Part of the deck was also shattered. We were taking a bit of water, but there was not a safety issue. We are gutted. We were the furthest east, in the current and thought we were in good shape.”