Hector Velazquez and Sammy Solis tested positive on Sunday in Mexico City and were asymptomatic and isolating in their hotel rooms, the Mexican baseball federation said. 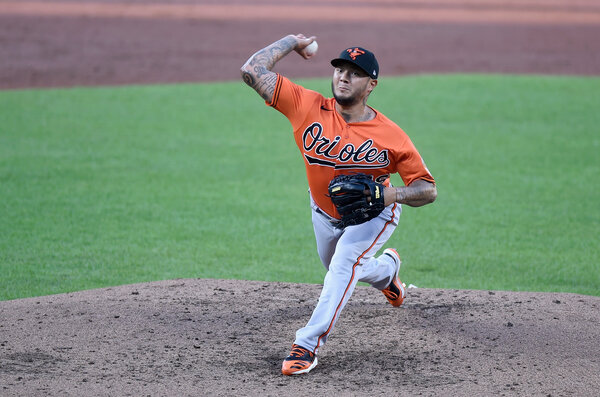 The Mexican national baseball team is in quarantine after two players tested positive for coronavirus ahead of traveling to Japan for the Tokyo Olympics, Mexican baseball federation officials announced.

Hector Velazquez and Sammy Solis, both of whom are 32-year-old pitchers, were tested on Sunday in Mexico City as the team gathered to begin practice and were asymptomatic and isolating in their hotel rooms, the federation said in a statement. As a result, national federation officials said practice on Monday was canceled and the rest of the team was quarantining in its hotel pending results from further testing.

Over the weekend, players and coaches reported to Mexico City and had begun training ahead of their departure to Japan. Mexico’s first game in the Olympics is scheduled for July 30, against the Dominican Republic, at Yokohama Baseball Stadium. Solis and Velazquez — both former Major League Baseball players — play for the same team in Mexico’s top professional league.

“Honored and excited to announce that I will be representing #TeamMexico at the Olympics in #Tokyo2020!!!!,” Solis said earlier this month, when the Mexican team was announced. “Being named an Olympian is a lifelong dream! Time to chase that.”

The news was a blow for fifth-ranked Mexico, which had qualified for the first time for the Olympics in baseball, a sport making its return to the Summer Games after a 13-year hiatus.

With games beginning on Wednesday and the opening ceremony on Friday, nearly 60 people connected to the Tokyo Games, from athletes within the Olympic Village to Japanese residents working at the events, have tested positive. Organizers are struggling to manage public anxiety as many thousands more athletes, coaches and other officials arrive in Japan for the Games.

The Mexican baseball team was the latest Olympic team to be disrupted by the virus. The United States’ men’s basketball, women’s 3×3 basketball and the women’s gymnastics teams have had to reshuffle their rosters after athletes either tested positive or entered virus health and safety protocols.