If John Coates had the baton, then what chance of him ever loosening his grip ever so slightly, let alone handing it over to Annastacia Palaszczuk?

Because for all the fallout from that press conference – the mansplaining, the staging, the what-the-hell-just-happened? – there is one sermon Australia’s sporting kingmaker is supposed to be preaching: men and women have never been more equal at an Olympic Games.

Coates is said to be a better politician than the like of the one he goaded on a world stage, and he would know the International Olympic Committee has bent over backwards to present the most gender-equal event in its often archaic history.

Almost 49 per cent of all athletes ducking COVID in Tokyo will be women, up from 45 per cent in Rio. For the first time, men and women will compete alongside each other on the track and in the pool in the Gender Games.

There will be a 4×400 metres relay in athletics and a 4x100m medley in swimming. It conjures spectacular notions of what could have been in yesteryear and yesterday; Shelly-Ann Fraser-Pryce passing the baton to Usain Bolt, Susie O’Neill diving into the wall and Ian Thorpe launching from the blocks, Coates and Palaszczuk walking back stage and hugging it out after winning the right for “The Together Games”. 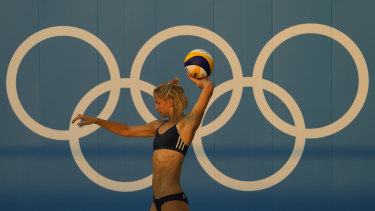 Germany’s beach volleyball player Laura Ludwig will be part of a female contingent which will make up almost 49 per cent of the Tokyo athletes.Credit:AP

Yet now it could be looked at it two ways: the IOC is paving the way for its future, or has been dragged into it in spite of itself.

Apart from the athletics and swimming, a mixed table tennis event and triathlon relay have been added to the Tokyo program among others. There’s even a multi-gender judo format. In Rio, mixed competition was restricted to just badminton, equestrian, sailing and tennis.

So, what next for Paris?

Archery and shooting, sports that require a sleight of hand rather than outrageous strength, are obvious candidates for more mixed medal events, even more than they have now. Why can’t beach volleyball feature one man and one woman on either side of the net?

Golf, controversially reinstated to the Olympics in 2016, is crying out for a diversion from the traditional individual strokeplay that is anchoring it down. How about an alternate shot competition with a man and woman representing each country? Imagine Steph Gilmore and Julian Wilson in a team surfing contest.

Maybe it’s all too much. Maybe triathlon has the right format, with men and women competing against their own sex for individual medals and then combining in a rapid mixed relay a few days later, an Olympic first.

“Triathlon has been predominantly an individual sport for many years and getting some success in the 2017 world champs where we won gold and then in the Commonwealth Games as well, they were a couple of proud moments,” said YoPRO-sponsored Australian Matt Hauser, who will be favoured to be on the country’s mixed relay team next Saturday.

“To be able to share that with three others and ultimately your whole team is something quite special. We don’t get to experience that often as triathletes.

“I think triathlon being such a young sport, it’s still evolving and trying to find its way in the world. It’s very exciting for spectators and viewers to look at this short, sharp format of racing where anything and everything can go wrong.

“If it does, it can cost you the race. Mixed team relay definitely holds a big part in how the sport will evolve.” 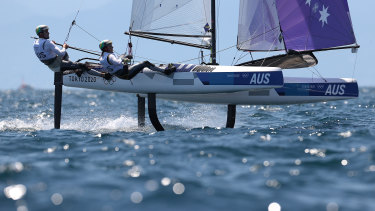 Team Australia’s Jason Waterhouse and Lisa Darmanin during a Nacra 17 class practice race in Enoshima ahead of the Tokyo 2020 Olympic Games.Credit:Getty

But for every door that opens, there are a few that are closing.

One of Australia’s best gold medal hopes in Japan will be the sailing duo of Matthew Belcher and Will Ryan, who will compete in the men’s 470 class. They won gold together in London in 2012, and then silver four years later in Rio.

Whether they would have had the desire to push on for another Olympic cycle after Tokyo would have been questionable, but it’s a moot point. Their category has been reclassified as a mixed event in Paris, and thus one of Australia’s most successful Games partnerships will be over – simply because they’re both men.

Fair or not? It’s not really for them to say, at least not now.

“It’s nice to be able to do a last dance together and to put our skills on the line and be in this pressure environment, which is why we do it,” Belcher said. “We’re just going to enjoy these days and hopefully our experience and our skills will come to the forefront.”

As hard as they might try, the IOC is struggling to sell its Gender Games because of, well, itself. Japan’s Olympics chief resigned earlier this year because he said “women talk too much”. Palaszczuk couldn’t talk, because Coates was speaking for her.