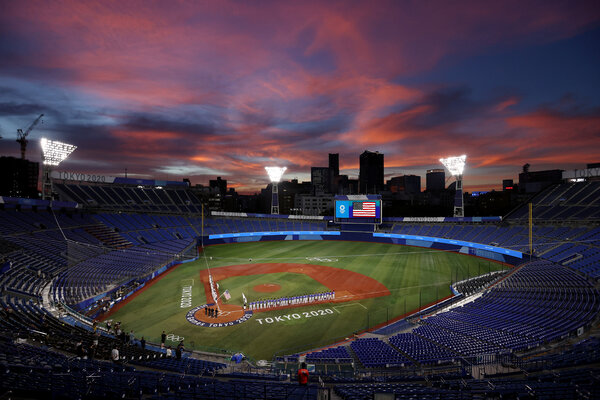 YOKOHAMA, Japan — The Olympic gold medal in baseball, after a 13-year absence of the sport from the Games, will come down to the tournament’s two best teams: Japan and the United States.

In a semifinal at Yokohama Baseball Stadium on Thursday, the United States topped South Korea, 7-2, behind another strong all-around performance. Joe Ryan, a right-handed starter, allowed one run over four and one-third innings. Four relievers, led by Anthony Gose, combined to allowed just one more run the rest of the way.

All tournament long, it has felt like a collision course between top-ranked Japan, which has never won a gold medal in Olympic baseball, and the United States, which won its only one in 2000. The United States’ only blemish so far at the Tokyo Games is a 7-6 loss in 10 innings to Japan on Monday.

Because of that defeat, the United States had to beat the Dominican Republic and South Korea to advance to the gold medal game. Japan simply had to beat South Korea, which it did on Wednesday.

On Friday, leading 2-1, the United States exploded for a five-run sixth inning that put the game out of reach. Mark Kolozsvary, Jack Lopez and Eddy Alvarez each drove in a run, while Tyler Austin capped the offensive outburst with a two-run single.

After the game, United States third baseman Todd Frazier said he told his teammates to get a good night’s sleep and that on Saturday, “You’re going to play in the best game of your life.”

By advancing to the final game, the United States is guaranteed a medal, and so is Alvarez, the team’s starting second baseman. That means Alvarez, 31, will become the sixth person — third American — to win a medal in both the Winter and Summer Olympics. At the Sochi Games in 2014, Alvarez won a silver medal as part of the United States’ 5,000-meter relay team in short-track speedskating.

“I still can’t believe it,” he said after Thursday’s game. “But the job’s not done yet.”

After the final out on Thursday, Alvarez sat in the dugout with his head down and cried. Afterward, he explained that he had been thinking about his path from his hometown, Miami, where his family ended up after fleeing Cuba, to becoming a two-time Olympian and a major league player with the Marlins last year.

“I started this journey since I was 6 years old,” he said. “I didn’t know it was going to take me to being a major-league baseball player. I never thought I would ever make it to the Olympics in baseball. I owe a lot to my family and the generations that have sacrificed a lot of their time to move from a different country and that ended up giving me opportunities. I got emotional because this is much more than my accomplishments.”

South Korea, which won a gold medal the last time baseball was played in the Olympics in 2008, will face the Dominican Republic on Saturday afternoon for the bronze medal game.