Australia’s Olympic skateboarding preparations are in disarray after three members of the Australian team, including a 13-year-old skater, tested positive to COVID-19 after travelling to the US for a qualifying event.

Two athletes are now out of the running of the Olympics due to the COVID-19 cases, along with one coach who also tested positive at the qualifying event.

The group of 11 Australian skaters, as well as staff, flew out from Sydney on May 3 to California before travelling to the Dew Tour in Iowa in an effort to qualify for the Olympics. 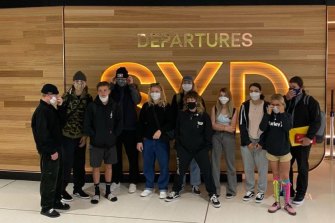 The group of 11 Australian skaters, as well as staff, flew out from Sydney on May 3 to California before travelling to the Dew Tour in Iowa in an effort to qualify for the Olympics.

The entire team was set to stay in Airbnbs in San Diego before either returning home or travelling to Tokyo if successful at the qualifiers.

Debuting at the Olympics this year, skateboarding is split into two disciplines: park and street. The park event takes place in a hollowed-out typical skate park course, while the street competition features a straight course with obstacles such as stairs, handrails and benches to mirror a real street.

Both positive athletes were park skaters, and Iowa was the last opportunity for park skaters to qualify.

“Other members of the travelling group for the park discipline remain isolated from those who have tested positive and have each returned multiple negative PCR tests,” she said.

“We believe our medal chances are still alive across both disciplines of park and street.”

Luckily, not all our skateboarders need to go across to the US to qualify.

Melbourne street skater Hayley Wilson is already ranked 7th in the Women’s Street and has been guaranteed a spot in Tokyo. She will fly directly to Tokyo from Australia.

In the Men’s Street category, LA-based Australian skater Shane O’Neill is ranked 16th in the world and has qualified for the Dew Tour men’s final on Sunday US time.