One of the biggest potential stars of the Paralympics says people should remember the original meaning of the word Paralympics to understand its importance and status.

World champion Daniel Romanchuk, who is a medal prospect in five wheelchair races and the marathon in Tokyo, says the Paralympics has made great strides.

The American told Sky Sports News from Tokyo: “We are all athletes … this is the Paralympics, athletes dream of coming to this competition and hopefully bringing home a medal.”

“Going kind of into the word here that Paralympics is parallel to the Olympics. That’s kind of the root of the words and I think that’s how it should be seen.” The Paralympics website says: “The word “Paralympic” derives from the Greek preposition “para” (beside or alongside) and the word “Olympic”. Its meaning is that Paralympics are the parallel Games to the Olympics and illustrates how the two movements exist side-by-side.”

Romanchuk, who is only 23, became the youngest ever winner of the men’s wheelchair race at the Boston Marathon in 2019. In the same year, he also won in London at the age of 20 with six-time Paralympic champion and rival David Weir describing his talent as “frightening.”

He has used a wheelchair since the age of five but is now competing at his second Paralympic Games.

Romanchuk: World champion and what is the T54 classification?

He has also been the star performer in recent marathons and by 2019 he had won the four major marathons in Boston, London, Chicago and New York before he had turned 21.

His big rivals include Switzerland’s Marcel Hug and eight-time London marathon winner David Weir, who Romanchuk watched and admired while growing up, and says is “amazing” to compete against.

This time Romanchuk is expected to win medals and the American is showing his versatility by racing in five events on the track ranging from 100m to 5000m which means he is in action every day from August 27 until September 2. There will be a sixth chance of a medal with a marathon two days later. Romanchuk describes it as a “very competitive class” and he expects races that are hard to predict.

Romanchuk’s preparation for the Paralympics was going well until the coronavirus pandemic disrupted him and all other athletes.

He had much more solo training and said of his weight training: “I had to use a 50-pound bag of wheat and then a few five-gallon water jugs until I was able to get in some equipment!” As the pandemic stopped the famous Boston marathon from taking place on April 20 last year, a late idea kept the spirit of the race alive for many elite Paralympic athletes.

Romanchuk said: “I think it was maybe two days or so beforehand that my mum and I were kind of throwing around ideas on ways that we could kind of support these races that really had done so much for us.

“And we decided, let’s maybe try and put out a virtual race on zoom. And we put it out on social media and I think within around 36 or so hours, I think we had 60-something athletes, 70-something people, because a lot of the other race organisers hopped on.

“We saw people from around the world, had someone from New Zealand. It was a wide age range and overall had a great time.”

Joined 60+ athletes from around the world for a 1 hour and 18 minute push organized by @RomanchukDaniel in honor of the @bostonmarathon that was to be held today! We already knew this but the wheelchair racing community is simply the best! #HealthyAtHome pic.twitter.com/IhCuMG4shT

The Zoom video screens showed athletes from Australia, Canada, Brazil, Great Britain, Japan and South Africa racing for over an hour on the day the marathon was scheduled to take place.

The ‘world record’ that won’t count

In October last year Romanchuk was looking to complete his virtual New York marathon. Athletes can cover the distance in their own location and send their results to race organisers rather than compete at an in-person event.

He said: “It was kind of fun in that we could be our own race director. And so my mum and I kind of scouted within like a 30-mile radius of Champaign (Illinois) just to see what the road conditions were like, then traffic and all that sort of stuff, and try and get a kind of a route.

Racing instead alone, virtually, on a course through central Illinois, U.S. Paralympian Daniel Romanchuk completed 26.2 miles in 1 hour, 13 minutes and 57 seconds on Thursday, in the process setting a world-best time for a men’s wheelchair marathon. https://t.co/862d663gMJ

“And so, it was a beautiful day and I had a good tailwind, a pretty straight course and yes, overall a good day I think it was a one 14 (one hour 14 minutes) or something like that.”

Romanchuk covered 26.2 miles in 1 hour, 13 minutes and 57 seconds in a straight line through Central Illinois. Incredibly, he had beaten another unofficial record by over four minutes which was set by Marcel Hug in 2017.

But Romanchuk’s incredible feat was not in an in-person race or on an official course.

Equal medal pay and the future

The Tokyo Games is the first when US Olympians and Paralympians will receive the same prize money from the USOPC (United States Olympic & Paralympic Committee) for any medal they win. The USOPC did retrospectively pay 2018 Paralympians the new higher amounts after the Winter Olympics finished.

In 2018 the chief executive of the US Olympic Committee Sarah Hirshland said: “Paralympians are an integral part of our athlete community and we need to ensure we’re appropriately rewarding their accomplishments.”

It’s one of a number of changes that Romanchuk is positive about. 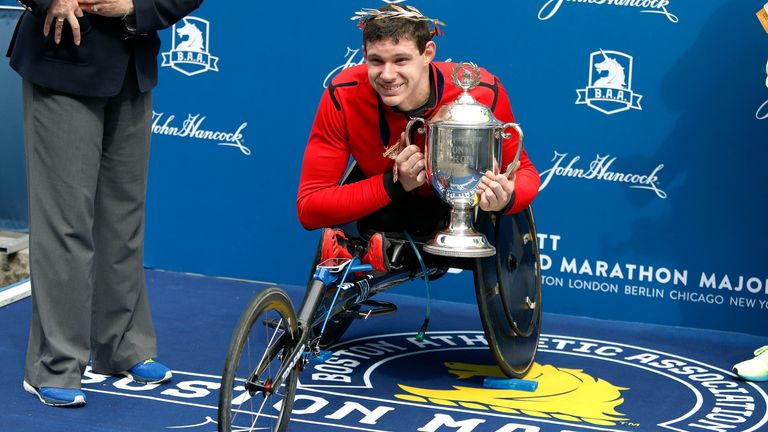 He said: “The USOC changed the name to the USOPC to include Paralympics in their name. Equal medal pay… a number of races have equalled some of the prize money for certain things across the runners and the wheelchair division.”

“I’ve been seeing great strides in this. I’m just really, really excited to see what the future brings.”

‘I would not be here without my parents’

Romanchuk’s parents Kim and Stephan Romanchuk decided to homeschool their son to avoid him experiencing bias and discrimination because of his disability and use of a wheelchair.

He got a chance to try a variety of sports from basketball, hockey, swimming, track, archery when his parents put him in an adaptive sports programme in Baltimore called Bennett Blazers at a young age. He took up sport from the age of five and competed in marathons at 14. 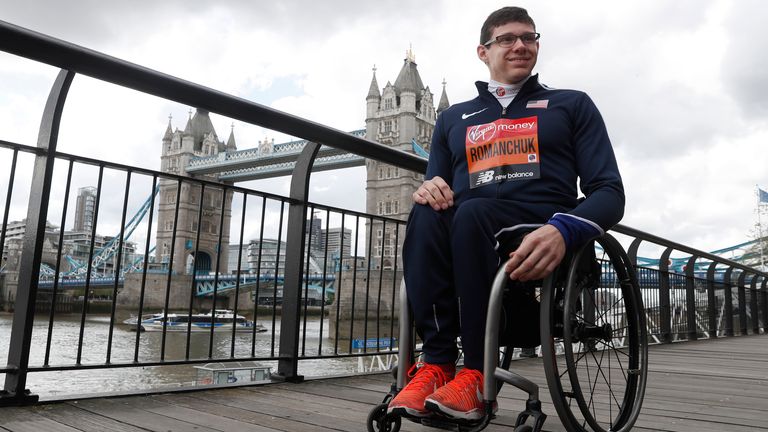 After excelling in sport, his mother Kim also asked if he wanted to focus on the track rather than other sports, with the potential of reaching the Rio Paralympics.

He chose wheelchair racing but did not medal in 2016. But the commitment has seen him train with Adam Bleakney, a well-regarded head coach for the wheelchair track and road racing team at the University of Illinois, which is a Paralympic training site.

Speaking about his parents, Romanchuk praises their efforts and inspiration as he was growing up. “They have supported me in every way. They drove me to practice, a 30- or 45-minute drive maybe two times or so a week.

“Travelling all over the world and moving halfway across the country. Trying not to get too emotional to the point where I can’t talk but… I would not be here without them.

“My mum has travelled all around the world, my siblings as well. My whole family was in Rio. It’s been an incredible time.”

So with a busy schedule, being an 800m world champion and facing the pressure of winning gold, how will Romanchuk deal with it?

He said: “I go in with a plan and I know who’s going to be in the race. For the marathons, I try and get as familiar as I can with the course. And from there I just make a plan. Once the gun goes off, I’m going to have to adapt at some points.

“But ultimately, it’s the same 400 metres as back home in Illinois. So if I’m ever getting too nervous or anything like that, I remember it’s a 400m track!

“At the end of the day, as long as I gave it everything I have, that’s all I can do.”