OLE GUNNAR SOLSKJAER pulled himself off the canvas as it became the turn of Nuno Espirito Santo to get a bloody nose.

The Manchester United manager lives to fight another day, even though this deserved win in north London still feels as though it is only delaying the inevitable. 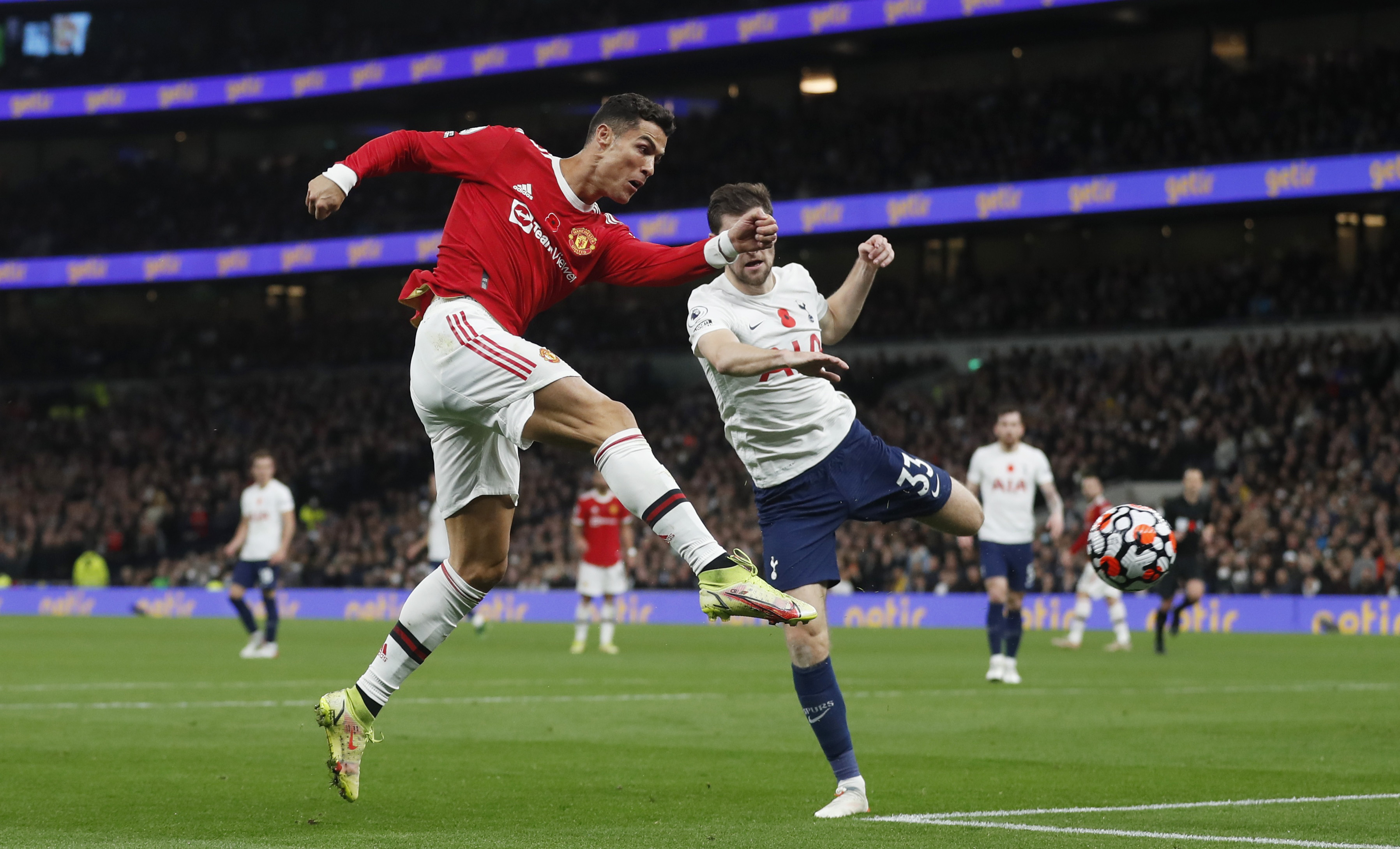 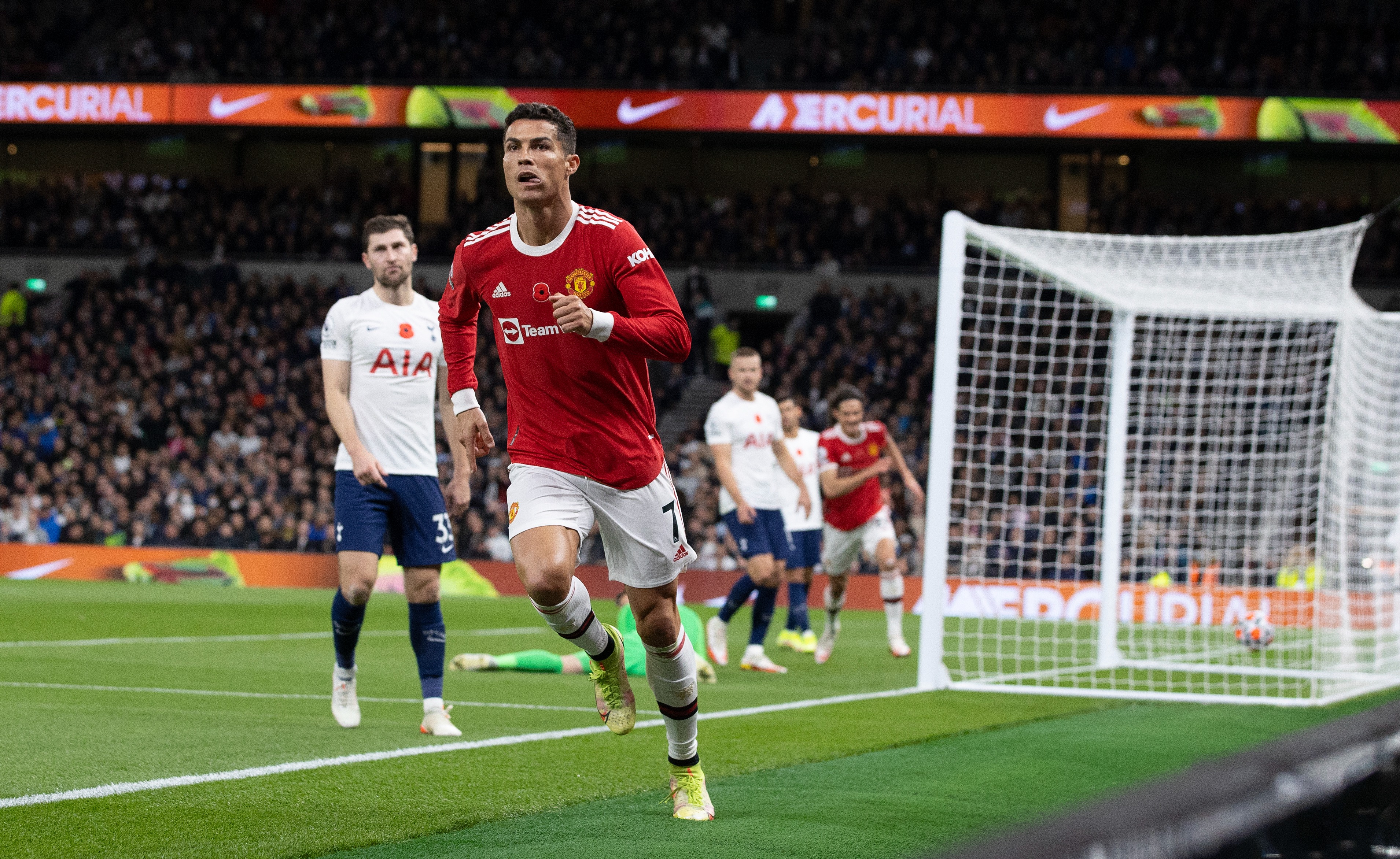 Yet at least United showed some character with Cristiano Ronaldo and Edinson Cavani, the oldest swingers in town, having too much nous and class for a shocking Tottenham team.

It was certainly a horrendous night for Santo who is increasingly unpopular with the locals. They chanted ‘you don’t know what you’re doing’ when he replaced Lucas Moura with Steven Bergwijn in the 54th minute.

After substitute Marcus Rashford added the third, the Tottenham fans made it clear they wanted the manager to be leaving with "we want Nuno out".

United’s supporters will not turn on Solskjaer, their former player, in such a way for obvious reasons. Yet Santo, a difficult character to warm to, has no credit in the bank around White Hart Lane.

For the United chief, after the complete embarrassment of the 5-0 battering by Liverpool six days earlier, this was an absolutely critical victory.

Any sort of repeat would surely have meant the sack but while at times there was a lack of quality, they still had too much for terrible Tottenham.

Solskjaer used a boxing analogy to describe how he wanted his players to demonstrate powers of recovery like Tyson Fury in his fights against Deontay Wilder.

There were neverves, which was not a surprise, but the commitment and organisation was there, even though central midfield still looks an obvious weakness.

And Solskjaer’s decision to play a back three for the first time since last December – when they lost 3-2 to Leipzig in the Champions League – seemed to work.

As he has proved with England, Luke Shaw is more of a capable wing-back and he got forward well here.

With Aaron Wan-Bissaka, there are not many less suitable full-backs to play in this system due to his limitations with the ball as he treats it like a bomb due to a desperation to get rid of it.

Yet the system allowed United to play with both Ronaldo and Canvai up front, who looked rusty in only his third Premier League start but he still helped ease the workload on the Portuguese international.

However, the quality of both teams was nothing like the top-notch football we have seen this season from Chelsea, Manchester City and Liverpool.

A messy opening 45 minutes was summed up when a decent chance fell to Fred but he fell over and Shaw delivered a brilliant rugby tackle on Moura and unsurprisingly, got a yellow card. 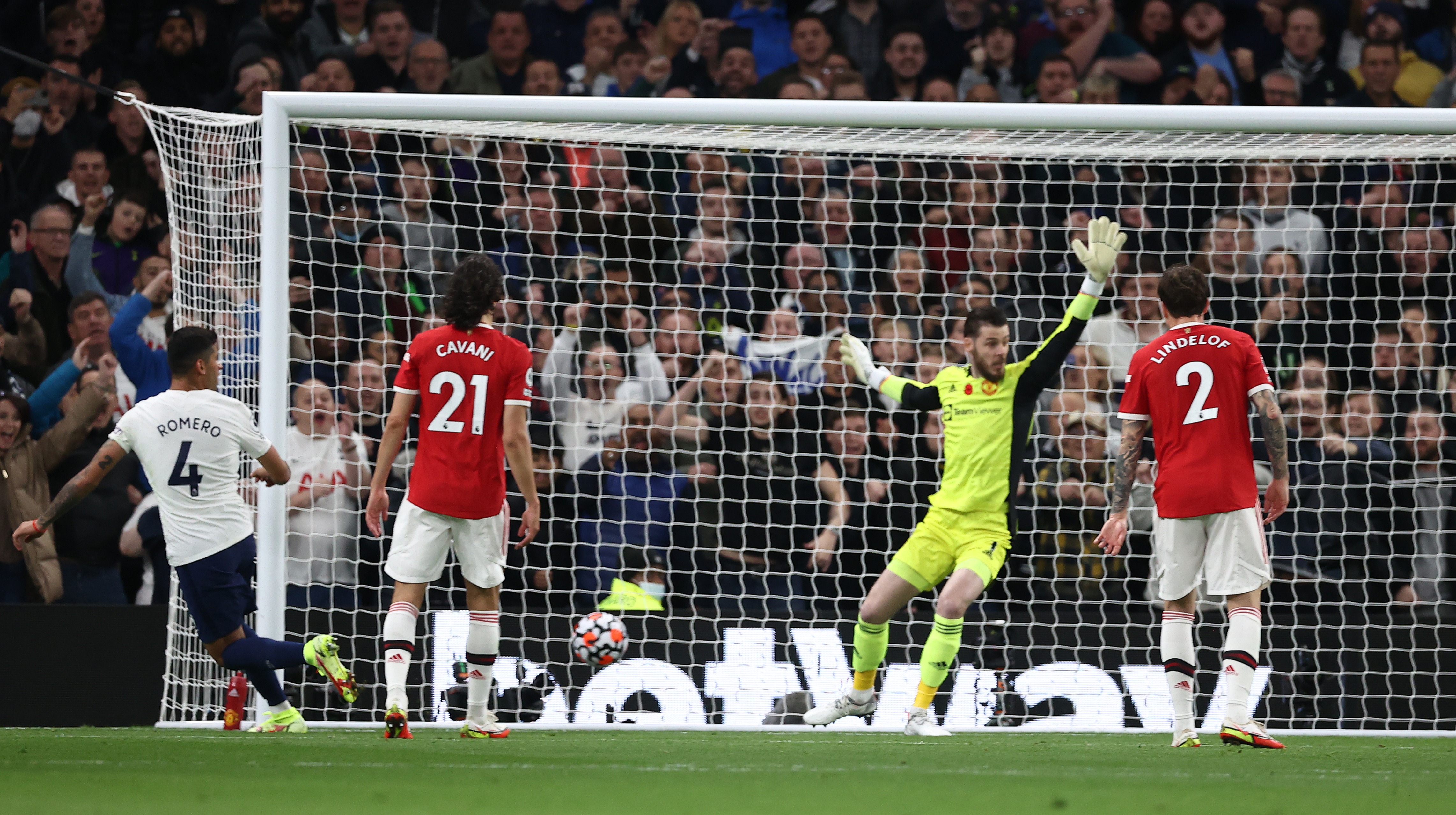 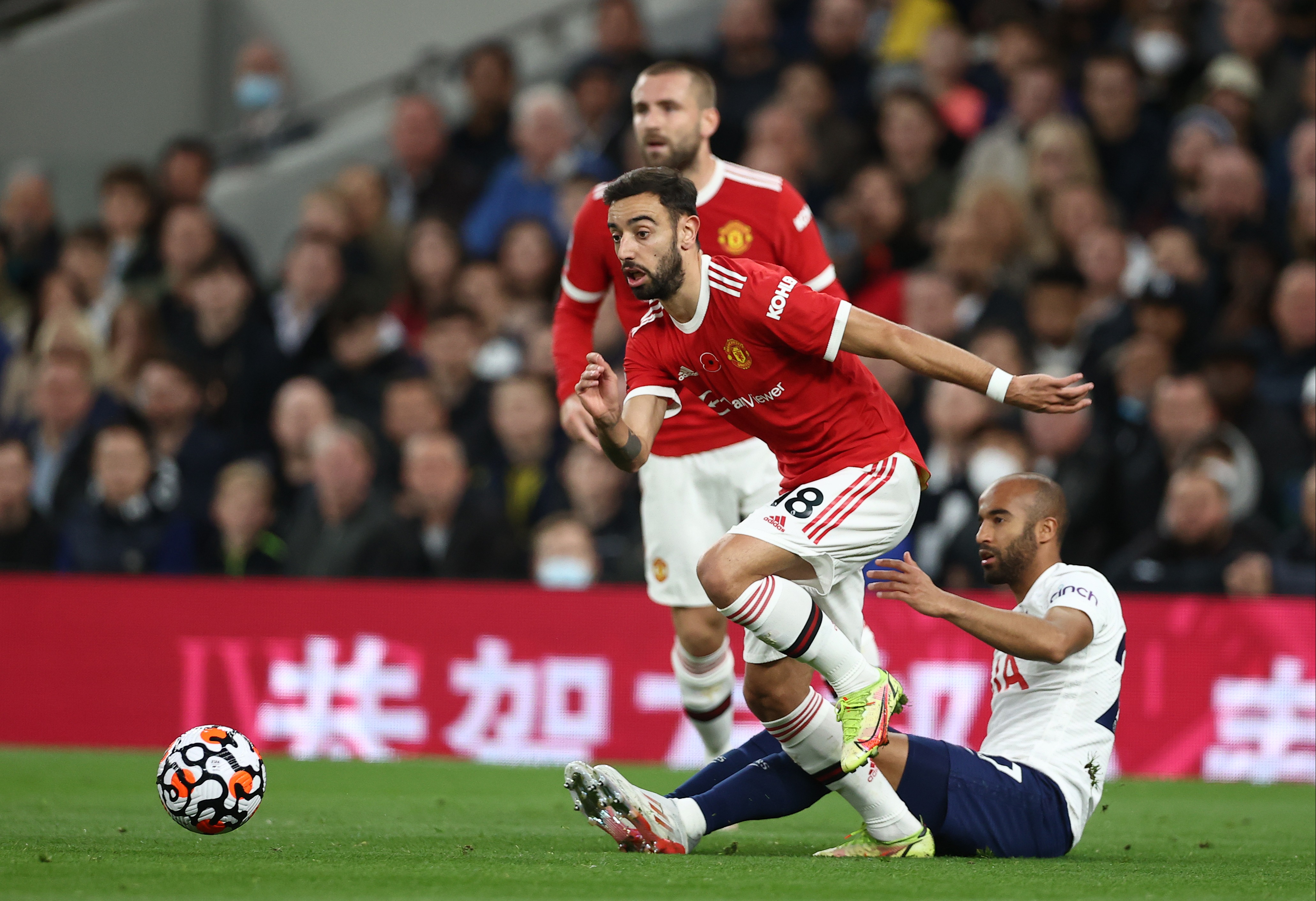 Son Heung-Min wasted a glorious chance from a couple of yards out but stuck the ball over and similarly, Cavani should also have scored but despite being unmarked, steered a header wide.

Cristian Romero sparked home celebrations when putting the ball over the line with his chest after Dier got his head to Heung-Min’s corner.

Eventually, the linesman woke up and remembered to flag.

It seemed as though neither team would be capable of actually scoring and then the superstar got involved.

The build-up to the goal before half-time was scruffy with the ball pinging about between both sets of players.

Bruno Fernandes lifted the ball towards Ronaldo, just beyond the head of Ben Davies, and United’s No 7 dispatched a trademark volley under the outstretched right arm of Lloris.

It was a typically clever piece of play by Ronaldo who shuffled backwards behind Davies to stay onside.

This also increased his tally of 11 goals in 19 appearances against Spurs with strikes in each of his last six matches for both Real Madrid and United. 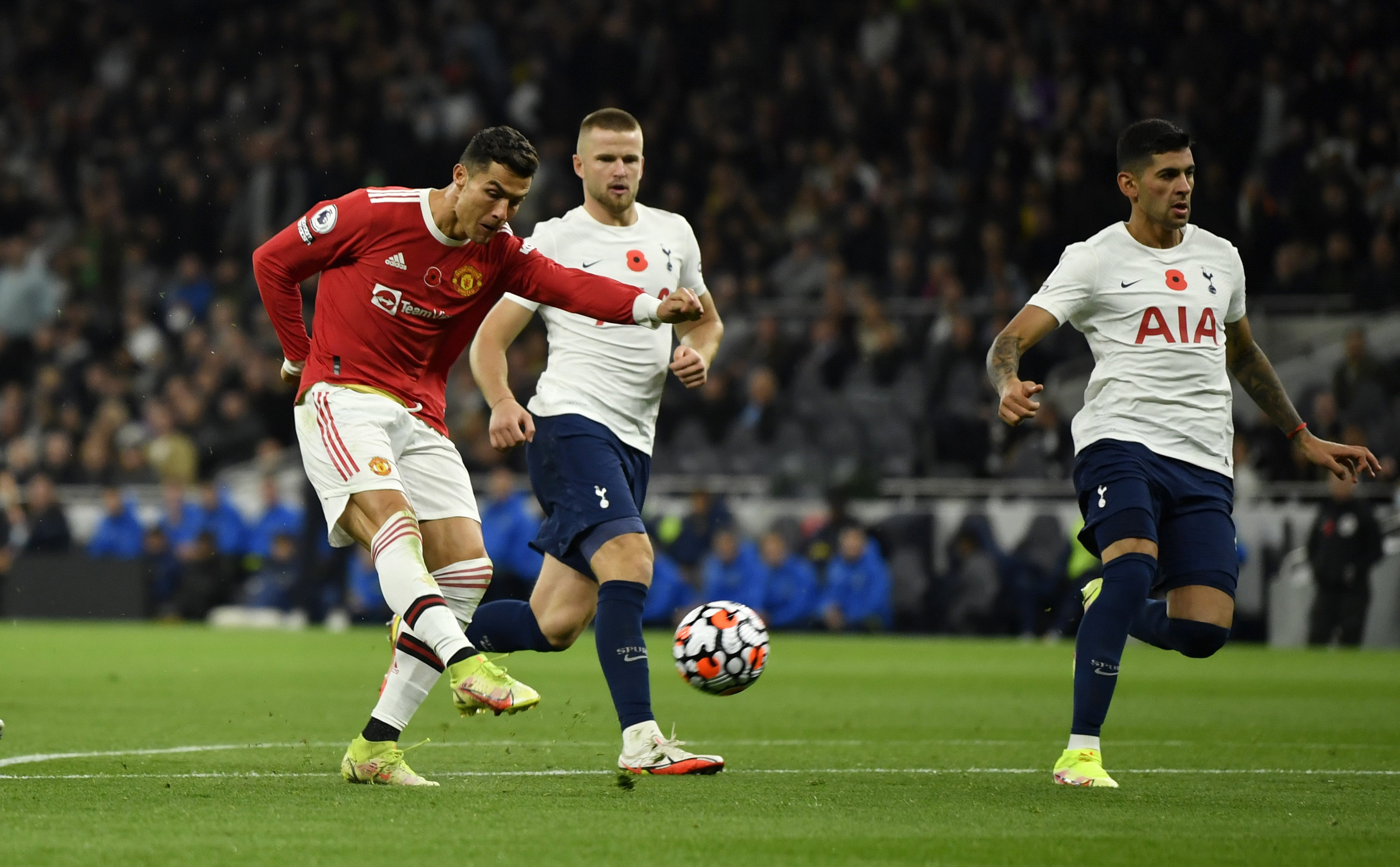 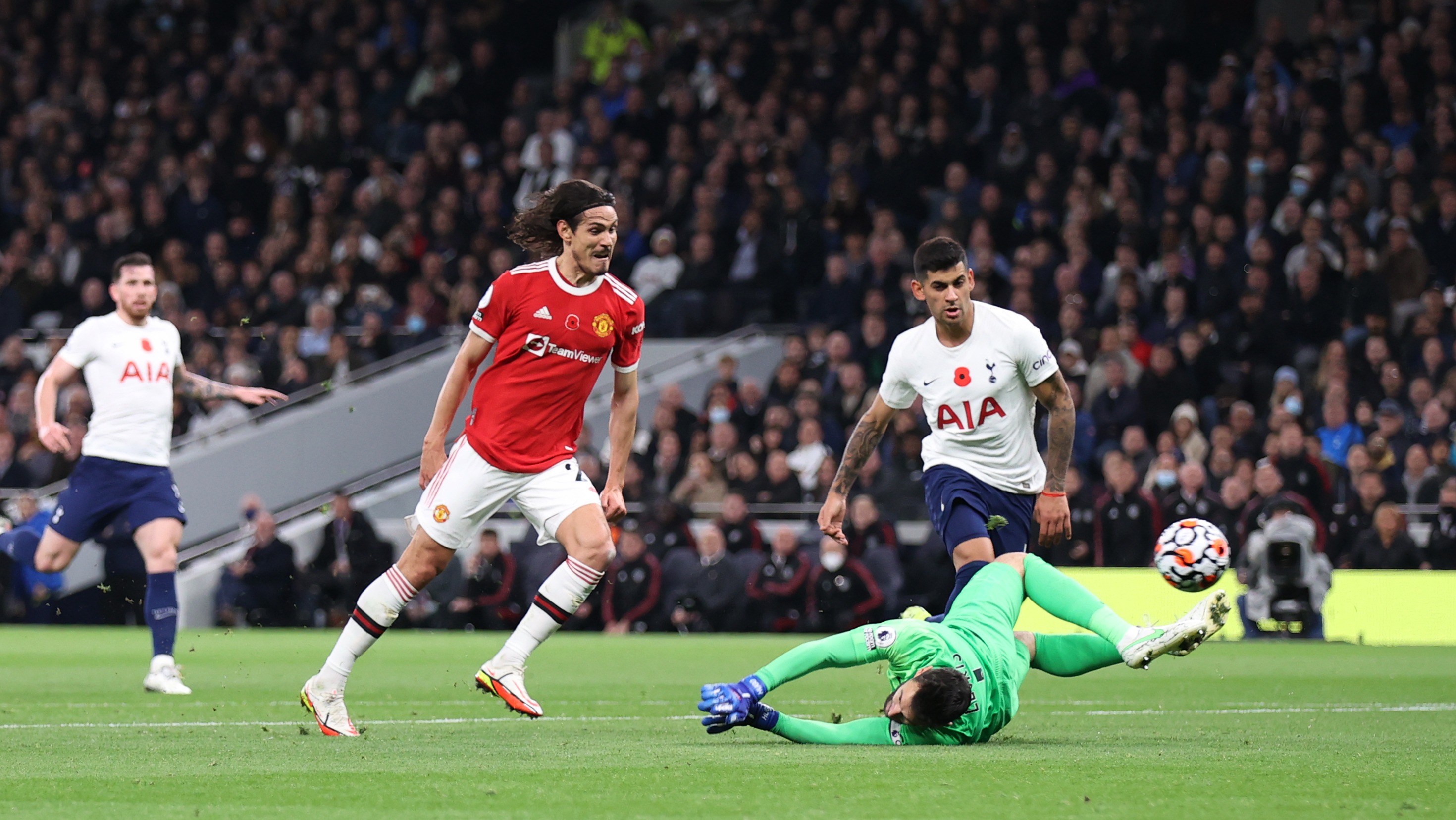 Romero tried to get Ronaldo sent off by diving theatrically before rolling around after being caught.

There was contact but it was an accident and Romero made a quick recovery once he realised Stuart Attwell would not be reaching for a red card.

Attwell’s half-time whistle was met with boos from the home fans who were slowly getting more annoyed.

As he came onto the pitch for the second half, Ronaldo shook hands with fellow countryman Santo.

And just 128 seconds into the half, Ronaldo then thought he had scored a second with a spectacular finish from the edge of the box but was offside.

Spurs had some pressure without causing any major problems before Cavani crushed any hopes of a recovery.

Dier lost the ball, and Ferndandes found Ronaldo who changed direction with a clever flick and played a pass beyond Romero. Cavani took one touch before burying a shot past Lloris. 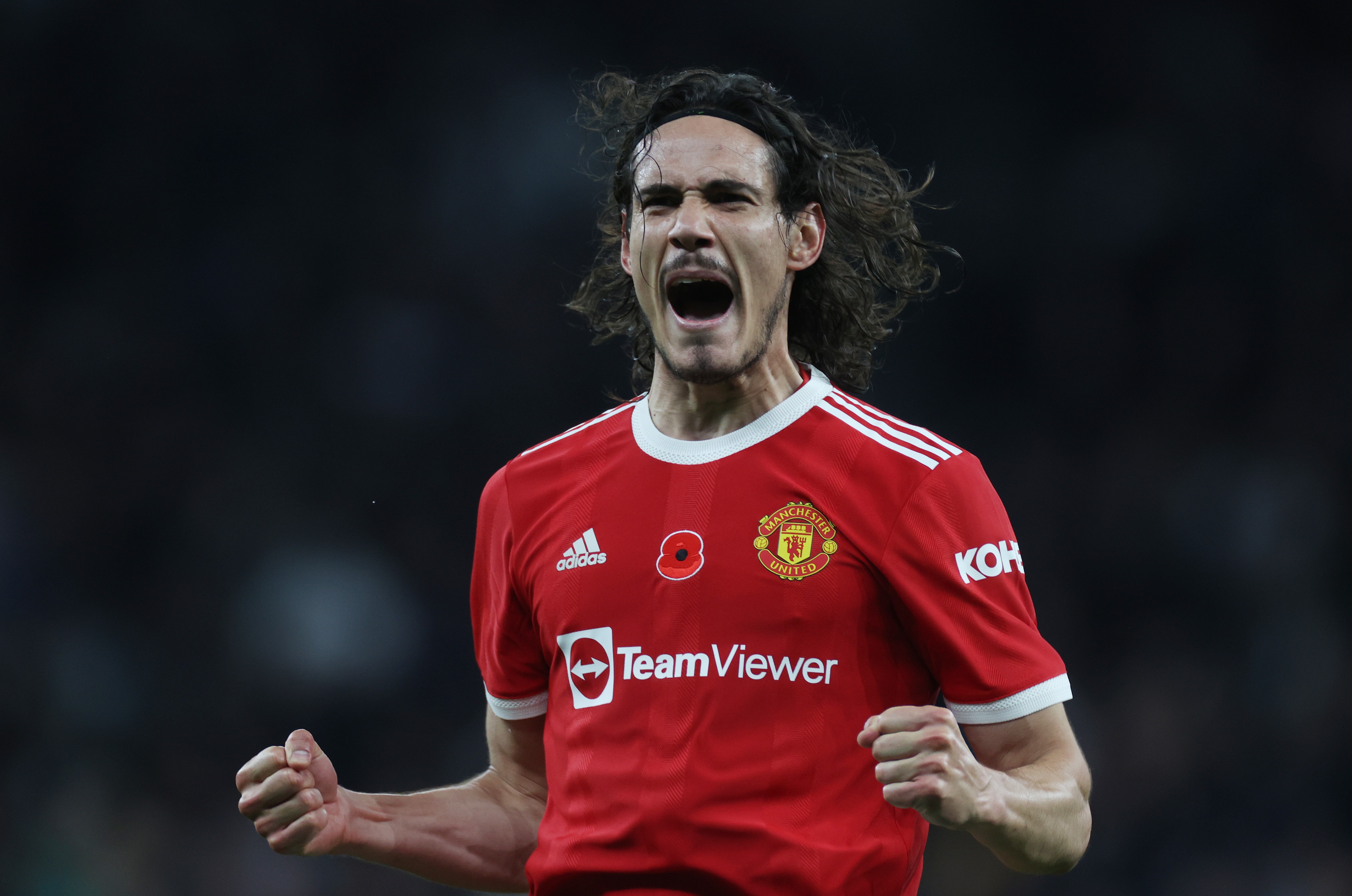 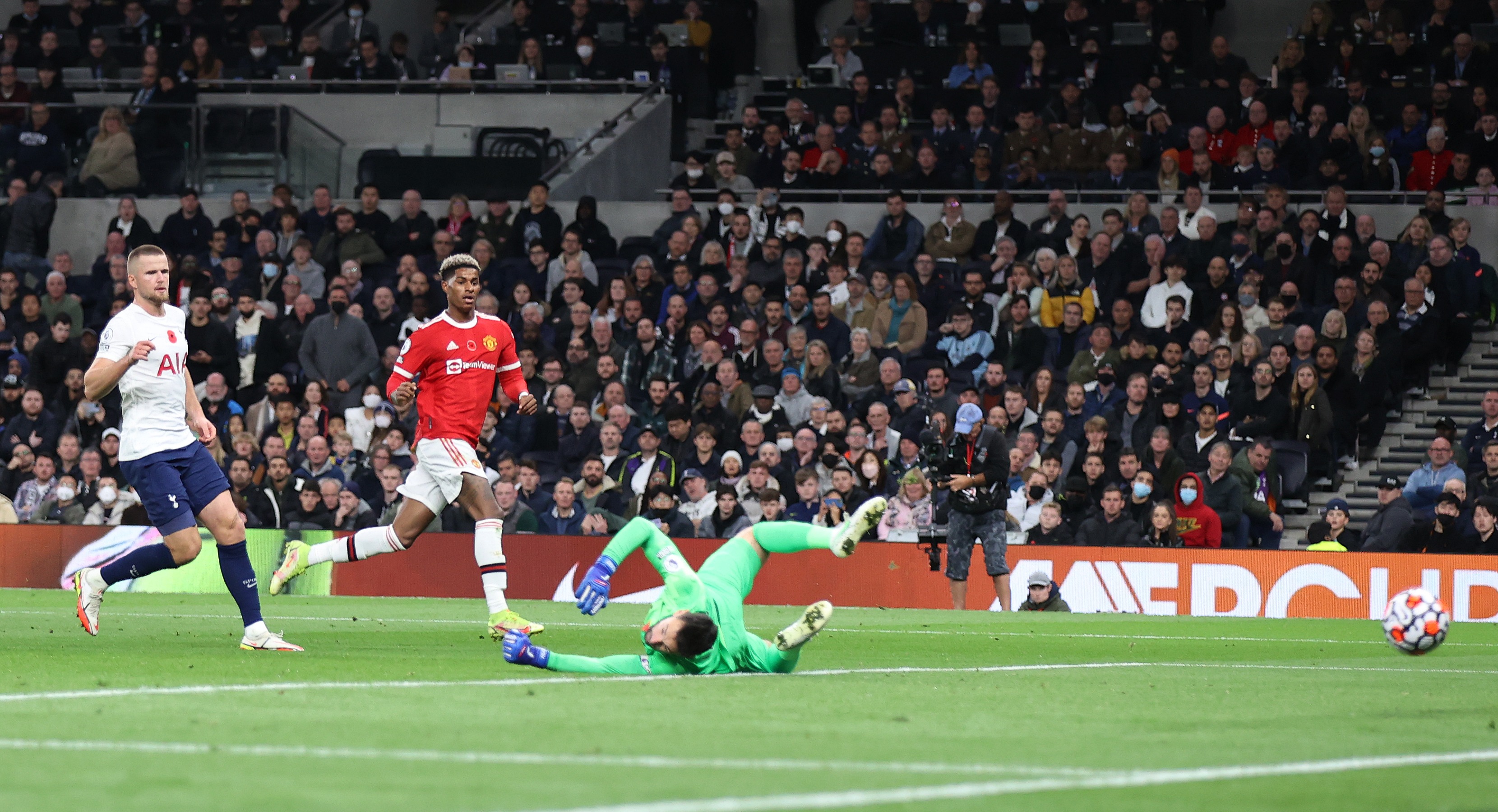 Ronaldo was replaced by Rashford in the 71st minute and he then completed the misery with a confident finish after being put through by Nemanja Matic.

Defender Davies played Rashford onside but Spurs fans were not interested in blaming anyone else than public enemy number one.

Whether Santo and his team can also emulate Tyson Fury and pull themselves off the canvas remains to be seen.

And you would not bet any money on either Santo or Solskjaer ending the season. 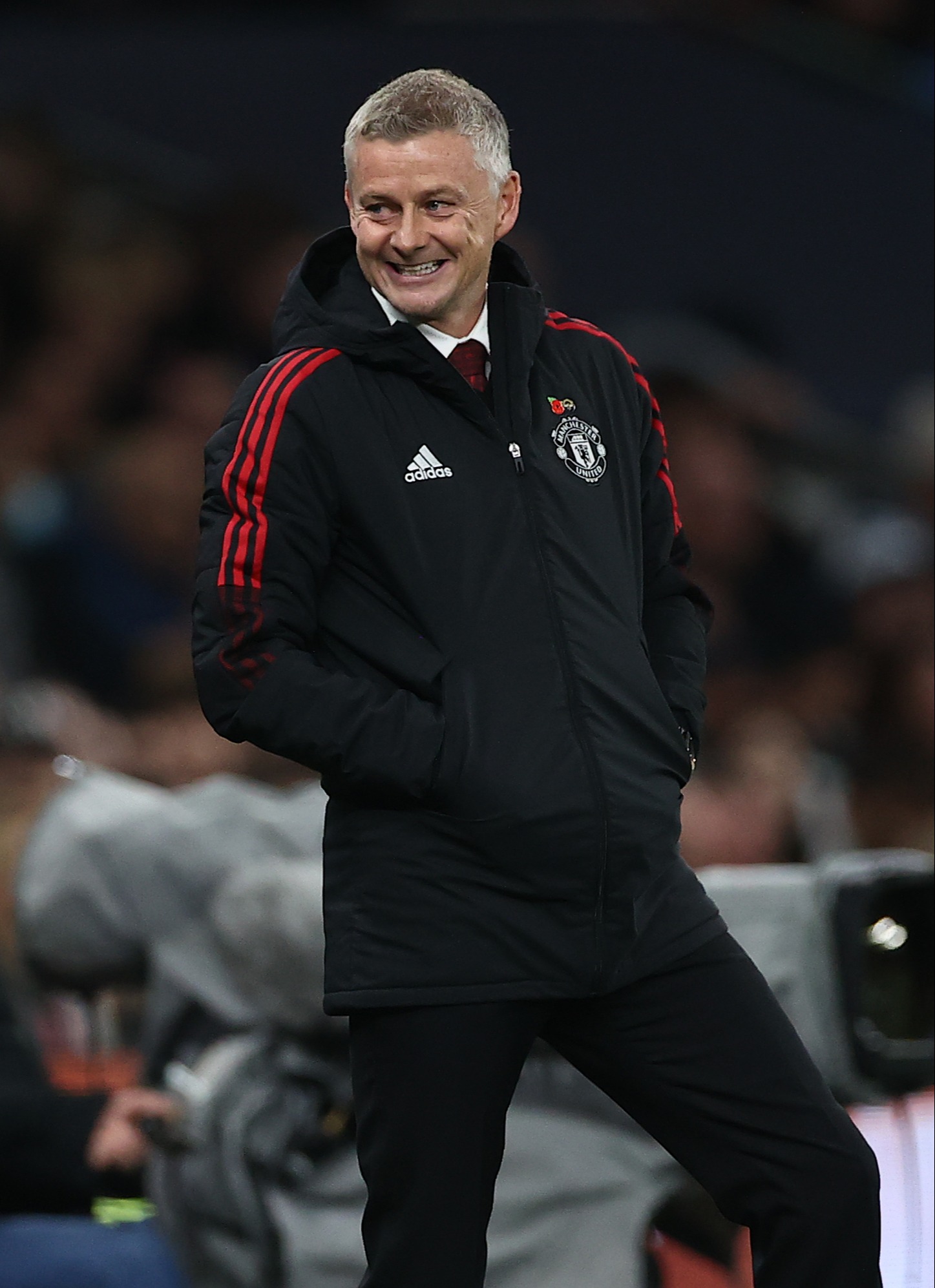 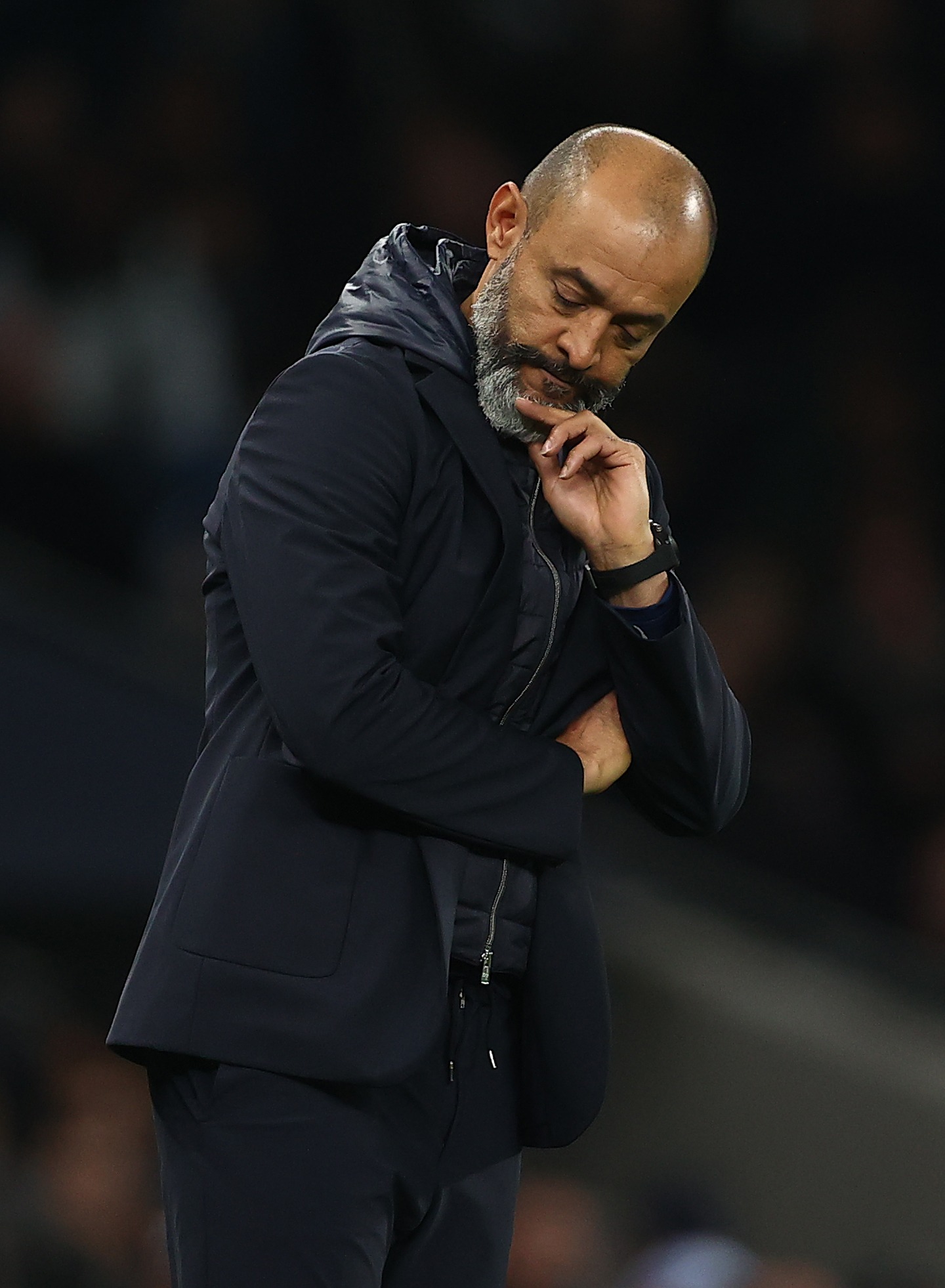