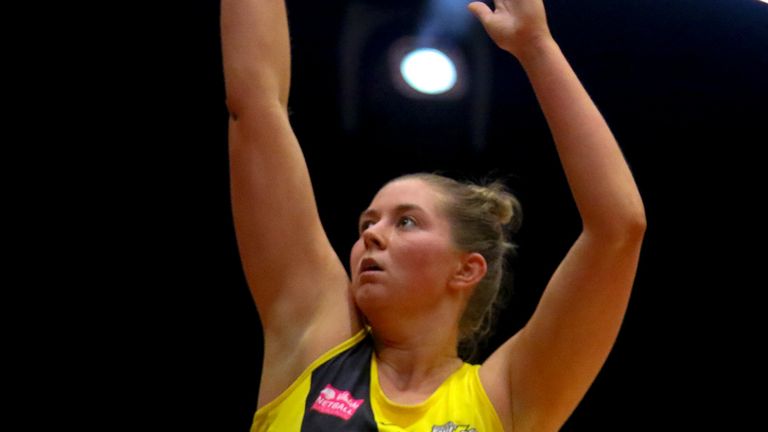 After the 2019 champions were pushed hard by the league’s newest franchise, Bath again showed their title credentials as they dismissed London Pulse without a second look.

Loughborough Lightning had to dig deep to overcome Strathclyde Sirens in the third match of the day, before Wasps found a way to push past a fired-up Dragons team.

Round Eight continues on Monday, with two matches live on Sky Sports Main Event and Mix from 5pm. First, Saracens Mavericks take on Severn Stars, before Pulse and Rhinos return to court to face each other. 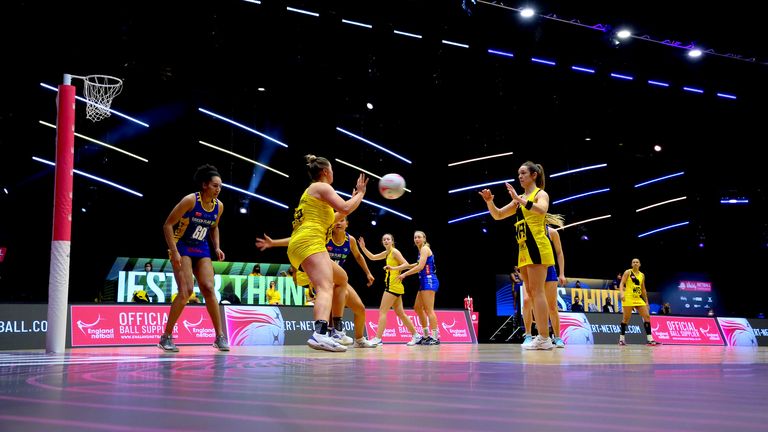 A first derby between Manchester Thunder and Leeds Rhinos Netball has set a high bar for future matches, as the 2019 champions secured a tight 48-41 victory on Sunday lunchtime.

With the match poised at 33-33 heading into the final 12 minutes, it became a case of which team would blink first after an undulating first three quarters.

Rhinos had started well to take the first 12-9, before Thunder found their feet and a 16-8 second quarter turned a three-goal deficit into a five-goal half-time lead.

During the second, Caroline O’Hanlon’s earlier move to WA and Amy Carter being introduced at C, helped Karen Greig’s side to settle. They provided quick, clean ball to Joyce Mvula and Rhinos’ own line-up amendments did not quite click.

At half-time, Thunder’s captain Laura Malcolm implored her team to “grind it out”, while Jade Clarke wanted Rhinos to continue to “take on” their opponents and front up in the second half.

Rhinos clearly listened to their captain as they raised their game throughout the third quarter. The re-introduced Vicki Oyesola and Tuaine Keenan shut down the route to Mvula and limited her to just one opportunity at goal during the quarter. At the same time, Rhinos restored their confidence in attack to ensure that the contest was level with 12 minutes to play.

Neither head coach made changes for the last quarter and in the end, it came down to Thunder’s superior shooting accuracy paving the way to victory.

While a couple of Rhinos’ key attempts bounced off the ring, Mvula and Eleanor Cardwell did not miss, and that allowed Thunder to edge away and secure them a hard-fought three points.

😅 Enjoyed that. Congrats to both @thundernetball & @RhinosNetballSL 2 quarters a piece, momentum swings, action and reaction in key moments for both teams and great to see it all tied heading into the final 15. Intriguing game 🙌🏻

In the second match of the afternoon, Team Bath Netball maintained their unbeaten record with a comprehensive 51-29 result against London Pulse.

Despite the first minute being blighted by a match-ending injury to Imogen Allison, Bath remained focused on the task at hand. Tash Pavelin showed her versatility to come in at WD and the players wearing blue and gold then put their foot on the gas.

Time and again, they forced Pulse into making errors. Layla Guscoth had a field day in defence and at the other end, the ever-reliable Kim Borger rewarded her team on the scoreboard.

With a 27-8 lead at the midway point, Bath needed to remain focused while Pulse had to press the reset button.

Despite the third and fourth quarters being stronger from Pulse, with Halimat Adio stepping up, Bath showed their strength in depth.

Anna Stembridge gave further game time to Jess Shaw, Summer Artman and Betsy Creak, as well as handing a Superleague debut to Hannah Passmore. A level final quarter was not as dominant as their first three, but the net result was still an impressive day at the Superleague office.

Lightning get over the line against Sirens

Loughborough Lightning and Strathclyde Sirens enjoyed an intense tussle before Sara Bayman’s side finished on the right side of the result at the full-time whistle.

After a fast start from Sirens, with the Scottish side being brave in attack and doing exactly what their technical director had asked of them, Lightning hit back.

Jaz Odeogberin arrived on court for the second quarter and had a significant impact on their output. She changed the picture in Lightning’s defensive end and allowed Beth Cobden to show her class.

Over the middle two quarters, Bayman’s team settled slightly in attack too and held a 31-27 lead heading into the final 12 minutes.

Sirens, who continue to improve round-by-round, clearly rattled Lightning as captain Nat Panagarry was asked to bring her players in and have a word about them giving about excessive ‘feedback’ to the umpires in the last quarter.

After that slightly unscheduled pause, Lightning weathered one final storm as Sirens brought it back to within two, before Mary Cholhok’s late goals added some gloss to the final margin of victory.

Most of the game I felt like we looked terrified of losing and that’s not how we want to play the game. It’s a win but it doesn’t feel like a win; we didn’t attack the game and we didn’t do what we talked about.

In the final game of the day, Wasps grappled their way past Celtic Dragons as the Welsh team delivered their best performance of the season.

The two-time champions went behind in the first quarter and were not able to retake the lead until four minutes before the interval.

Dragons, who arrived at the contest without a victory to their name, attacked from the first minute and played with confidence. Clare Jones and Shona O’Dwyer disrupted Wasps’ flow in attack, while Rebekah Robinson and Amy Clinton put up their shots well.

As the second quarter played out, Amy Flanagan’s move to Centre and Lily-May Catling’s arrival changed Wasps’ dynamic through court, and alongside key turnovers this helped them to create their 23-21 half-time lead.

Mel Mansfield’s team continued to be frustrated after the break and Jones continued to lead Dragons’ charge. However, a few missed shots cost Dragons and Wasps battled through their discomfort to edge six up, and go into the final quarter five ahead.

From that position, Wasps took control of the contest and, after finding a higher gear, the 14-goal winning margin belied their earlier struggles.

Sky Sports is your home of netball. The Vitality Netball Superleague continues on Monday with two more matches on Sky Sports Main Event and Mix from 5pm, both contests will also be streamed on the Sky Sports YouTube channel.