SHOCKING footage shows a footy fan apparently knocked unconscious as yobs shove each other and rip down a stadium fence during a mass punch-up. 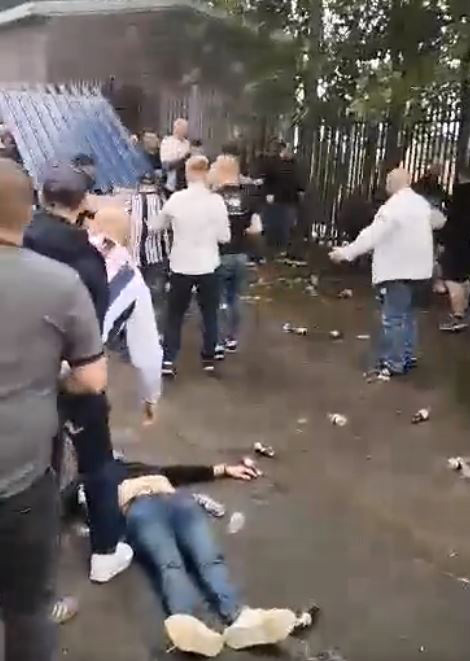 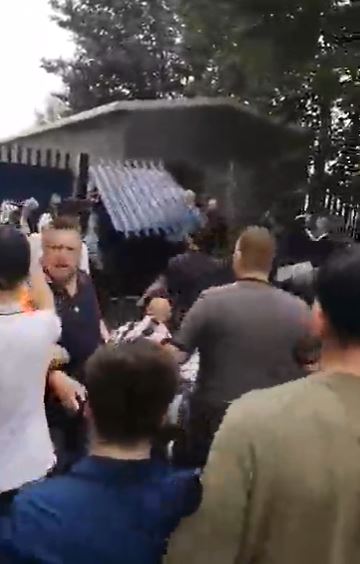 Video of the brawl shows swarms of supporters engaged in a mob battering, with several appearing to stamp on a fan on the floor.

Chants of "we are Albion" can be heard as a huge blue gate is torn down behind the brutality.

Men in plain clothes grab bottles from the ground then hurl them into the air, sending drinks flying.

Among the violence, a fan can be seen lying on his back with his arms spread out wide, seemingly unconscious.

Fellow fans form a barrier around the motionless man in an attempt to protect him from the onslaught.

Reports on social media suggest he was knocked out during the sickening scenes, though it is not known which side he supports.

A separate video of the same free-for-all shows a huge crowd charging towards the fence.

Others make a run for it in the opposite direction to safety.

The clip then shows the same bottles being pelted at supporters to the sound of West Brom chants.

The game ended 1-1 but violence quickly escalated outside The Hawthorns stadium.

Hundreds of Twitter users slammed the "disgraceful scenes", describing the behaviour as "disgusting".

One person said: "Grown adults behaving in this way. Wow."

Another posted: "What is wrong with these people?"

A third even claimed things started "kicking off" during the match, with "blood and guts everywhere" in the stands.

The condition of the man on the ground is not known, nor whether any arrests were made, but The Sun Online has contacted West Midlands Police, the ambulance service and both clubs for information.

It follows similar scenes in August which saw Millwall fans involved in an away end brawl during a Championship clash with Cardiff.

Stewards and police were seen among the supporters during the scuffles in the Welsh capital, which occurred during the Lions' 3-1 defeat.

The ticketless louts breached security to charge into the London stadium, breaking through barriers as stewards battled to keep control.

One yob even punched a young boy just minutes before the Three Lions took the field.