And the 19-year-old says he wants to emulate Hammers vice-captain Declan Rice who made the same move when he was 14. 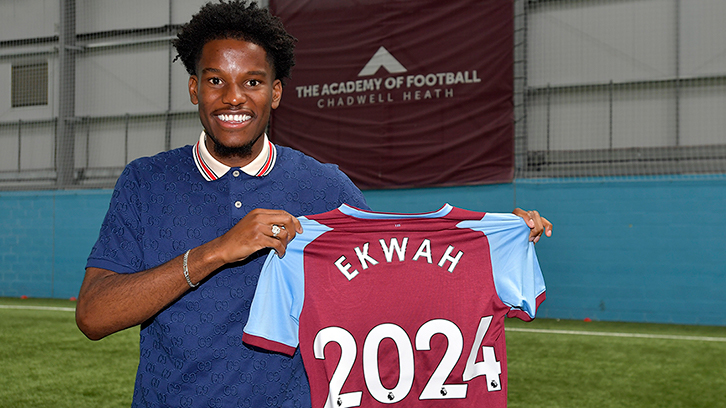 The Frenchman has signed a three-year deal with the option of an extra year and joins from the Blues for an undisclosed fee.

Holding midfielder Ekwah spent two weeks on trial with the East Londoners at the end of last season.

He played the last two Under-23 matches of the season which were both against Arsenal and he scored in the second one.

And having made the move permanent he is looking to West Ham's first-teamers who have graduated from the Academy of Football before him.

“I’m really happy in myself. I want to thank the club for the opportunity they have given me. It’s a big achievement for me.

“I really think that West Ham is a club where everyone is working all together.

"The U23s and the first team work really closely to each other, and I think that young players here have got a good chance of breaking into the first team, as they have done in the past.

“Loads of young players have reached the first team: Declan Rice has been captain, and he’s so young and playing so well.

"Mark Noble is an unbelievable player who’s been there and done the same. I just want to do similarly to them.

“When West Ham gave me the opportunity to come in for two weeks, I took it, saw how the club worked, and I just enjoyed it.

"They gave me the opportunity to sign and I said ‘Yeah, I’m taking this shirt away!'"

Ekwah has French and Ghanaian heritage. He has previously played for Bretigny, Clairefontaine and Nantes.

And he looks up to fellow Frenchmen Zinedine Zidane and Claude Makelele.

A NOBLE ENDEAVOR: Departing West Ham captain Mark Noble is a dying breed of footballer and we are unlikely to see loyalty like his again

He added: "My favourite position is definitely playing No8 – box-to-box midfielder.

“I like creative players, and players who break things up as well. I’m a ball player as well, so that’s the position I really enjoy playing in.

“I would say, because I’m French, Zinedine Zidane [was my idol]! He was my guy. [I also like] Kaka, Andrea Pirlo, Claude Makélélé…

“I wasn’t looking at just one player, I was literally looking at every single team who had that midfielder who was the break-up player or the playmaker.

"I was just looking at them and taking in everything I could. I still do it when I watch football.

Ekwah is West Ham's second signing of the summer after Thierry Nevers arrived from Reading.