The scariest part of this week’s Evil isn’t the wannabe possessed girl chewing glass. Or the seriously messed-up mom traumatizing her kids in exchange for online likes. It’s actually the relatability of how quickly, easily and all-encompassingly Ben, David and Kristen get sucked into a Tiktok-like app they’ve downloaded for a case. I feel seen… and ashamed.

Meanwhile, the Bouchard girls accomplish something their mother could not, and we get a grim update on what Andy’s been up to since he’s been gone. Read on for the highlights of “The Demon of Algorithms.”

IT SUCKS YOU IN | An investigation into a teen girl who claims she’s possessed — and who broke a mirror with her hand, then chewed on the glass while allegedly under a demon’s power — reveals that she got the idea from a magician-turned-influencer on a social media app called Vidtap

Ben first is clued into the fakery when he realizes how social-media savvy the girl has been: All of her possession videos coincidentally are exactly as long as the app allows. But all of his time doing research causes him to post a video of his own; he debunks the showman’s tricks, saying, “Don’t be an idiot, OK? Just don’t hurt yourself. Don’t copy a–holes like this magician.” Aw, I’m genuinely moved by the concern in Uncle Ben’s voice! When he immediately starts getting reactions via the app, he can’t stop himself from checking them. They got ya, Ben!

Turns out, they also got Kristen and David. Kristen is served up mom-hack videos (I love how she flips past them until she lands on how to soup up your canned margarita), and David starts seeing clips from priests who are frustrated with the strictures of priesthood. Ben gets a lot of people yelling at him… until he sees a response from a woman named Marie who claims something bizarre is happening to her two sons at night. She seems terrified, and she asks for his help.

NO IMMEDIATE CLUE | When the Holy Trinity visit Marie’s house, she whispers that she’s afraid something evil is inside her boys, given how the torment follows them throughout the house. She shows them footage of the boys’ beds moving, of the kids getting pulled from their beds by unseen forces. Then she shows them a surveillance video of the older boy, Brandon, putting his younger brother, Mikey, in the clothes dryer in the middle of the night.

When summoned, Brandon tells the adults that he was just trying to protect Mikey from “the thing that comes into our room at night.” Poor Mikey is so frightened just talking about it that he pees himself right there on the living room floor. Our trio is stumped, so they ask Marie if they can come back that night around 1 am, about an hour before the scary shenanigans usually get going. She agrees. 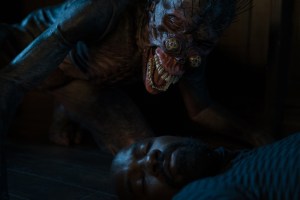 EVILKRISTEN RETURNS! |In the meantime, Kristen goes home and, after watching a Vidtap about how a mom’s daughters came up with their own rules in response to hers, she realizes that the Sisters Bouchard have done the same. (Side note: Her “NOPE,” written across their erased commandments, made me laugh, as did the girls’ loving note back to their mom at the end of the hour.) And back in his bedroom, EvilKristen shows up — dressed like a Catholic school girl, because why not? — while David is watching videos made by his lonely brethren. He wearily reminds EvilKristen that he’s already said the sex is over, but she’d rather chat. After all, aren’t there things he wants to say to the real Kristen, but can’t? He dismisses that notion, but is brought up short when she brings up The Entity and wonders if he’s being used. He says of course he is, but “if it saves Grace Ling, then it’s worth it.” She coyly says that Grace’s name hasn’t come up in a while, and maybe it was just the hook they used to get him to leave the dead Chinese man’s hotel room door ajar. She says he can’t trust The Entity. He says he can’t trust her, a demon. “David, I’m not just a demon,” she says sweetly. “I’m you.”

Just then, Sister Andrea walks by David’s room and hears a loud thump. When he doesn’t answer her knock, she opens the door and finds him laid out on the floor, with what can best be described as a mosquito from hell sucking… something out of his temple. She throws a Bible at it, and the insect-like demon flits around the room a bit before she banishes it for good. And David is mad at her for barging in! He has no memory of the demon or anything weird happening. “There was something attached to you,” she says, worried. “What are you doing?” But an irate David doesn’t answer, instead taking off to go to Marie’s place.

IS IT THE MOM? | While Kristen, David and Ben sit in the car outside Marie’s, waiting for something weird to happen, they talk about Vidtap’s algorithm, which seems to be serving them darker and darker fare. “It’s the American way: When in doubt, go with violence and sex,” Ben notes. They’re interrupted when they all get push notifications from Vidtap: Marie is livestreaming surveillance footage that shows her boys are bleeding from claw marks on their back and arms. After the assessors rush in, they see that Marie has been clawed on her abdomen, too.

David & Co. wonder why she livestreamed the footage, but she says she didn’t and doesn’t even know how. She posits that the app, which she claims is sentient, also is evil. But after they leave, Ben calls a hearty BS on that. He tells his co-workers that one of the people in his Super Secret Science Group (Working Title) is employed by Vidtap, and maybe she can get them some answers.

YEAH, IT’S THE MOM | At Vidtap’s offices the next day, Ben’s friend cheerfully rebukes their experiences that the app is sending increasingly disturbing videos against their wishes. “What’ll grab your attention isn’t always what you want,” she says, adding snarkily that it’s the Church’s job — and not Vidtap’s — to make people better. But she also helps them greatly by letting them know that Marie edited the previous night’s footage in the app, then slips them the raw video from her account.

And when they watch it: Yep, it’s Marie who’s been rigging her kids’ room to appear haunted and who clawed them with a kitchen tool to make it look like a demon was grabbing for them. So they go to her house to confront her. She denies all. Then she starts a Vidtap livestream and claims she’s possessed. And finally, she grabs a pair of scissors and runs at Ben, Kristen and David. The three subdue her, Ben disarms her, and they call an ambulance for the seriously not-OK woman. 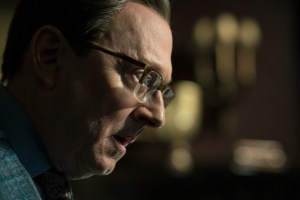 BOUCHARD GIRLS: 1, LELAND: 0 | Now let’s deal with Leland (because the Bouchard girls sure do in this episode). The monsignor pulls Kristen aside to say that the archdiocese investigated Leland’s appearances at the school, and they were all above board, so no worries nothing to see all is well! So she goes home and gathers her daughters, giving them laminated cards with a plan on how to proceed if Leland contacts any of them again. “We’re going to have to rely on each other now,” she says seriously.

After she leaves the room, the young ladies decide that they need to do something about Leland. Though Laura goes right to killing him with poison (ha!), Lexis suggests that they use Bumblebee Valley to do him in. So they go into the game and out him as an older man masquerading as a young teen girl, and they call him a pedophile. They also have recordings of him saying inappropriate things in the game. Then they set his (virtual) home on fire.

An incensed Leland has his pig avatar address the game, saying that the girls’ claims are untrue. (Side note: Is the pig reading from a prepared statement? I DIE.) “We need to shut this guy down,” Lynn notes, back in the real world. So the girls call the pig out by his real name and announce that his IP address tracks to St. Joseph’s Parish — aka the monsignor’s realm.

Next thing we know, the monsignor is showing Leland footage of the girls denouncing him in the game; he quietly thanks him for his service and asks him to leave his position at the church. “You’re going to be sorry,” a furious Leland tells him. “It’s a rarity when I’m not sorry,” the priest says. Back at Evil Command Central, Leland rages to Sheryl that it’s time to “make four little girls four little orphans!” Then he flips over his glass desk top, and it shatters.

WHERE ANDY REALLY IS | And now for the actual creepiest part of the episode: the truth about what’s going on with Andy. At one point, Kristen tries to videocall him. The call is spotty, and when it is clear, he responds really weirdly to her saying, “Happy anniversary.” Then he ends the transmission quickly, leaving his wife angry and confused.

But then we go to Evil Command Central and find out that Leland is on the receiving end of all of those calls, using deep-fake technology to make it appear as though Andy is at base camp… when he’s really incapacitated and stuffed into a bunk in a creepy back room. “You know you’re going to spend the rest of your life here,” Leland calmly tells Andy, who eventually nods and acknowledges that the anniversary to which Kristen referred was of their first date.

Sheryl knows about all of this, by the way, and isn’t bothered in the slightest. Later, we see her clipping Andy’s nails and telling him that, because she doesn’t want to hurt Kristen, Andy will “die” in an avalanche in about a month. “Your body will never be recovered,” she tells him matter-of-factly, previewing that Edward will pay Kristen and the girls even more than he originally promised. “So, you’re more use to them gone than back home,” Sheryl chirps before leaving and closing the door behind her. We then get a shot from Andy’s point of view: The bunk directly above him has a bumper sticker slapped on it: “Today is the first day of the rest of your life.”

Now it’s your turn. What did you think of the episode? Sound off in the comments!