The viewer, called Jill, rang in to comment on a debate about whether housing should be built on brownfield or greenfield sites. Jill told Jeremy Vine she lives in a small rural village in Launceston, Cornwall, an area where properties have been planned for construction.

“The houses over here had to put their own pipelines in. We don’t have gas and we have only just about got electricity.

“The phone lines are temperamental. We don’t have a bus service here, we have a school bus service but that’s just about it.”

As he illustrated a large map, Jeremy replied: “What year is it there? It sounds like 1780.” 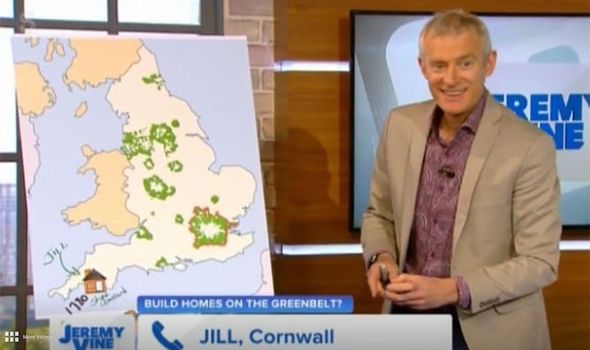 Jill went on to argue the economies in towns in her area are dying and, as a result, new housing should de developed on the disused buildings old businesses previously used.

She continued: “My concern is, Jeremy, is that the town centres are emptying, the shops are closing and they are empty.

“We have industrial sites where businesses have pulled out. They (councils) are not doing anything to make use of buildings that already have amentities, like water, electricity and phone lines. Those buildings are being left empty.”

He said: “Yes. I mean it is terrible what Amazon is doing to the shopping areas as well.”

The exchange was part of a discussion about where to develop properties. Jill’s call preceded conversations with a woman in Kent and a man in County Durham, who both agreed greenfield sites should be protected. 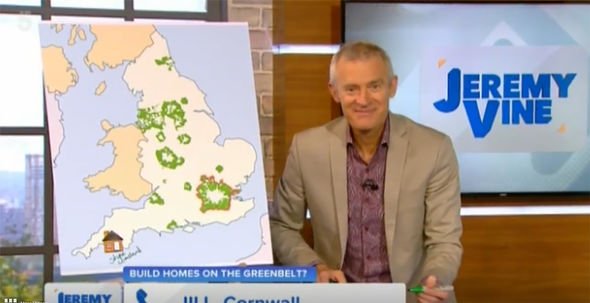 However, it was reported this week that 400,000 new homes will be built on greenfield sites, like farms, in the south of England alone in the next five years.

Areas, such as Buckinghamshire and Central Bedfordshire, will each have to create at least 10,000 plots in order to meet revised housebuilding targets in this period.

But in February, The Campaign for the Protection of Rural England said plans to destroy more greenfield spots would be catastrophic.

Speaking then, Chief executive Crispin Truman said: “The Government can and must act to stop the loss of greenbelt and ensure greater access to nature and green space is at the heart of our planning system.

“This can be done by making best use of land previously built on before considering development on the greenbelt.”