Holy Olmec, Legends of the Hidden Temple is back.

For children of the ’90s (your recapper among them!), Sunday night was a big deal, as The CW debuted its reboot of Nickelodeon’s beloved 1993-95 game show. This time, though, the contestants are adults instead of kids; it’s essentially the 20- and 30-somethings who wanted to be Blue Barracudas and Green Monkeys in their youth, but are only just now getting the opportunity.

Aside from the players’ ages, the major difference in The CW’s version is its host: Comedian and actress Cristela Alonzo (Cristela, His Dark Materials) takes the hosting reins from Kirk Fogg for this iteration, and she’s not wearing quite enough khaki for my liking. But other than those tweaks, the new Legends of the Hidden Temple is a lot like the old Legends of the Hidden Temple. Even Dee Bradley Baker is back as the voice of Olmec! So while the whole thing feels a tad hokey at times, I am suddenly back in my childhood living room, watching a new episode after school. Let’s rip open a fresh pack of Dunkaroos, punch in that Capri Sun straw and get to it.

In each Legends episode, four teams — down from the original series’ six; we’ll miss you, Silver Snakes and Orange Iguanas! — compete to win $25,000, which they’ll do by defeating their fellow contestants in physical and mental challenges until they’re the last team standing. Then, in the final round, the remaining duo makes a run through Olmec’s temple, completing various puzzles and obstacles until one of them finds the ancient treasure around which the episode is based. 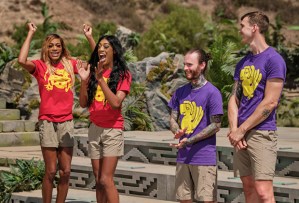 During Sunday’s premiere, teams are in pursuit of the Lucky Losing Pok-Ta-Pok Ball of the Hero Twins. And this time around, the competing duos are best friends Travis and Tom (Purple Parrots), soul sisters Jo’el and Dyaman (Red Jaguars), best friends Chelsea and Maddie (Green Monkeys) and roommates John and Connor (Blue Barracudas).

The Blue Barracudas are the first team out, ironically bested by the water-based Moat challenge. Then, the Steps of Knowledge trip up the Green Monkeys. It’s down to the Red Jaguars and Purple Parrots in the best-of-three Temple Games, and the Purple Parrots narrowly emerge victorious with the two Pendants of Life needed to run through Olmec’s temple. (Just like in the original series, though, it all comes down to a tiebreaker trivia question, which still feels a bit lame.)

Travis and Tom put up a heck of a fight once they’re in the temple; at the very least, Tom absolutely sails through the assembly of the Silver Monkey, which was a source of great stress for anyone playing or watching the original show. But that stupidly difficult middle section is a piece of cake for Tom — was it always that simple, and only tough for our child brains? — and it’s a real heartbreaker when he ultimately falls one room short of retrieving the Pok-Ta-Pok ball after time runs out. Hey, at least the Purple Parrots get $2,500! But yeah, they’d probably prefer that extra zero on the end.

Fans of the original Legends: Did The CW’s reboot live up to your expectations? Grade it in our poll below, then drop a comment with your full reviews!