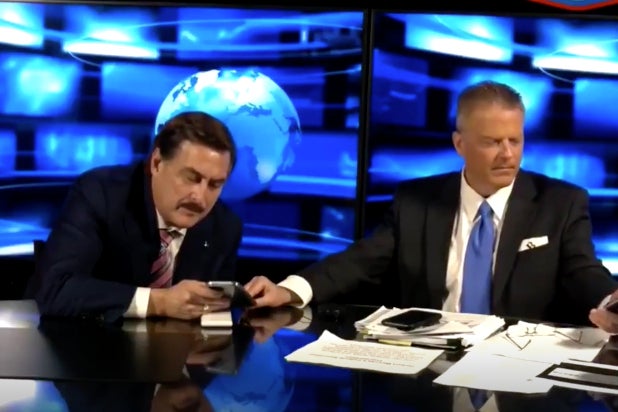 In what has to be the most laughable Mike Lindell gaffe yet, the MyPillow CEO got pranked big time into taking a phone call from none other than former President Trump.

The call occurred during the launch of Lindell’s social media site “Frank” — a platform that promises free speech, yet somehow doesn’t allow profanity or for God’s name to be taken in vain. During the livestream promoting the platform’s launch, a number of prank calls came in, with Lindell proving each time how unprepared he was. But then an overexcited Lindell took the call from “President Trump,” whose voice can be heard over the phone greeting the audience.

“We have the president here, our real president everyone!” Lindell announces happily. “Hello, Mr. President!”

Instead of Trump’s response, there’s some unintelligible words ending with the word “b*tches.” A mortified Lindell immediately tries to turn off the phone as quickly as he can, fumbling for an explanation that doesn’t make him seem totally stupid.

“I guess, uh…I guess that wasn’t — you see what they’re doing?” Lindell asks, trying to recover, before pivoting to the usual conspiracy theorist explanations while desperately trying to prove his legitimacy. “They’re attacking us! They’re attacking us and this is what — it even came up, hacking into our phones, it came up that it was a legitimate number, I know the number is coming from President Trump!”

Back in February, Lindell was slapped with a $1.3 billion defamation lawsuit for peddling election lies. He was also booted from Twitter (hence the conception of his own social media platform). So to say he’s not really having the best 2021 would be an understatement. And honestly, Lindell’s explanation didn’t really do much to convince us he knew enough to not fall for the prank call.

But who knows? Maybe there’s some people out there who will buy his weird excuse.

Watch the video below.