“Night Court,” which ran on NBC for nine seasons between 1984 and 1992, was a sitcom that relied heavily on its first syllable. Set during the night shift of a Manhattan municipal court, creator Reinhold Weege’s seven-time Emmy winner was built on the pliable foundation often favored in a TV era when seasons ran for 22-24 episodes per year. New cases came up fast and funny: some episodes focused on a single issue, while others ran through a few at a time, while shifting focus to the people of the court. Either choice brought out plenty of weirdos, wrongfully accused, and random denizens of the night for Judge Harry Stone (played by the late Harry Anderson) to inspire or punish, based as often on his own peculiar instincts as on the arguments made by a few defense attorneys (Markie Post as Christine Sullivan had the longest run, from Season 3 onward) and one steadfast prosecutor: Dan Fielding, played by John Larroquette.

Whether the gang was deciding if an omniscient, red-suited trespasser could be Santa Claus or they were merely trying to clear a busy docket, “Night Court” could always rely on its setting to stir things up — even when the jokes were telegraphed, the punchlines tired, and the characters inert. A great situation with sporadic comedy, if you will. But “Night Court” could also rely on Larroquette — who won four of those seven Emmys himself (and could’ve won more, had he not withdrawn from consideration) — and all of the above holds true for the new “Night Court,” as well. Even with a revamped cast, tweaked dynamics, and the ongoing reevaluation of America’s judicial system, NBC’s sitcom remains the same as it ever was: pretty OK.

Developed by Dan Rubin, “Night Court” 2023 (or Season 10, or whatever you prefer to call it) picks up in similar fashion to the original pilot. There’s a new young judge holding the gavel, and she’s as bright-eyed and bushy-tailed as they come. Judge Abby Stone (played by Melissa Rauch, who also serves as executive producer) is Harry’s daughter, eager to follow in her father’s soft-soled footsteps, but not everyone working her shift sees sunshine and rainbows after midnight. Neil (Kapil Talwalkar) is her impatient clerk, Olivia (India de Beaufort) is the ambitious assistant D.A., and Donna “Gurgs” Gurganous (Lacretta) takes her job as baliff way too seriously to abide any tomfoolery. 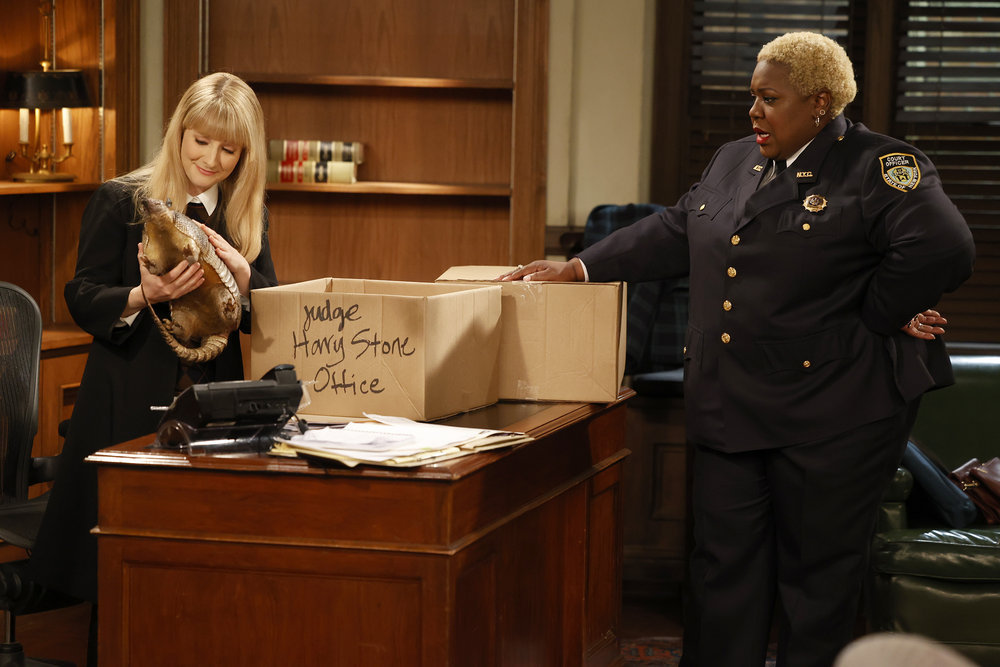 Still, tomfoolery is what she faces when Abby insists on testing a self-appointed psychic’s abilities, and even her shrewd assessment proves too much for the public defender. He quits on the spot, sending Abby on a quest that, not unlike her father, is simultaneously sweet and not actually her job. (There are far too many shows where a judge does the job of an attorney, and the O.G. “Night Court” is as guilty as any for propping up such misconceptions.) She wants to bring back Dan Fielding, only not as the prosecutor he played in prior decades, but as the state’s appointed defense.

This shift represents the series’ first savvy rearrangement. Dan is still Dan: a front-facing curmudgeon with a heart of, well, not gold, but maybe a yellow-plated bronze. But he’s no longer the hound-dog of his youth. “You live, you love, and you lose — big time — so you close off your heart,” Dan says, describing his post-Season 9 life of solitude. Dan doesn’t date, let alone chase skirts, making his “upper-middle-class white guy” (as a prospective companion calls him) much more inviting than the horny old man he could’ve become. It also fits his role reversal as a lawyer who has to believe in people rather than expect the worse, and “Night Court” takes its time coaxing out Dan’s inner teddy bear.

Larroquette remains an exemplary talent. He pivots his character with grace, making it easy for established fans to go-along with the adjustments and even easier for newcomers to get behind the once-outrageous womanizer. His comedic timing remains crisp, and his softer moments carry even more poignancy. Unfortunately, the rest of the courtroom can’t keep up. Abby is a neutral presence: perfectly capable of doing the job, but rarely adding anything substantial to the mix. Gurgs steals all the punchlines, but never coheres beyond an enthusiastic presence. And Neil is an absolute mess: One episode, he’s so inept at dating, he becomes reliant on a 12-year-old for advice (while stretching that joke over 22 agonizing minutes); in another, he’s claiming “being great with moms is my thing.” But how could that be true, if it’s impossible to picture him on a single successful date?

Through six episodes, “Night Court” isn’t trying to reinvent the wheel. The humor is accessible, the characters broad, and the messages overt. Yes, the show halfheartedly tries to address the shift in perception toward “unconventional” judges in Episode 2, “Just Tuesday,” and the court’s damaged public stature (in Episode 4, “Justice Buddies”), but there’s no actual wrestling going on; for every acknowledgement of modern sensibilities (“Paw Patrol” is copaganda!) there’s a cringe-inducing banality. (Judge Abby has the courage to admit she’s “not anti-protest.”) Old fans may be satisfied simply by seeing Larroquette again, and new fans may be taken by him, as well — but the latter group isn’t sticking around for an all-too-familiar old school reboot. There’s too much order in this “Night Court,” which never becomes as weird or wild as its premise demands, making its case for relevance is too easily dismissed.