At any given moment the most titillating movie intrigues are not about star salaries or director firings, but rather about those grisly details that are well below the radar.

“The blood doesn’t look right to me. We need believable blood. Blood that coagulates. Get me better blood.”

Those were the demands of one filmmaker who was prepping an especially violent scene on an important movie. Though he abhorred violence, he was determined to deliver memorable murders.

Production strategizing usually remains secretive, with the exception of Alec Baldwin’s Rust, which seems grist for endless litigation. On most studio films, however, the cone of silence remains intact.

The vintage example is The Godfather: Though much has been written about that movie, some pre-production conflicts have lately been revisited in Mark Seal’s new book Leave the Gun, Take the Cannoli, which relies in part on two previously unknown documents.

Peter Bart: 'Spider-Man' Highs Spurred By Younger Cinemagoers, But What To Do About Faltering Grownup Fare?

Francis Coppola, it seems, decided to retain the services of two individuals to record, word-for-word, the deliberations between himself and his senior production staff — details involving his rebellious production manager, his temperamental cinematographer and, of course, the always melodramatic Marlon Brando.

Full disclosure: As the book points out I was the vice president for production at Paramount in that period and was occasionally on set — but not often enough to observe these day-by-day dramas. Robert Evans, as studio chief, had made it clear that my primary responsibility at Paramount was to mobilize our coming slate including the likes of Paper Moon, The Parallax View, Chinatown and The Longest Yard, as I had done in leading the charge to acquire The Godfather.

On The Godfather, Coppola famously set out to make a $7 million art movie about a gangster family – one unlike any other genre movie. In doing so, he instructed his crew to devise a list of “movie clichés” that he would carefully avoid. His film would “defy audience expectations of a crime film.” It would be “more painterly than pulpy.”

Coppola thus decided to create a succession of tableaus that would set the tone, whether for a wedding scene or an assassination. Even the murder of the police captain at an Italian restaurant would rely on a master tableau in a harshly lit restaurant. “We want to take violence into the bright lights. Movie killings are always in a dark corner,” he said. “The entire movie will consist of one long series of fantastically beautiful pictures in a world of ugliness and evil.”

Achieving the specifics was often stressful, as with a prospective bridge scene. “Bridges are a pain in the ass,” complained Gordon Willis, the feisty camera man. “The people who run them are especially a pain in the ass.”

Coppola fought hard to create a scene in which a 1945 period Constellation would fly Tom Hagen to Los Angeles but, again, Willis protested that the old aircraft would prove noisy and unwieldy. Coppola refused to budge on the grounds of authenticity (in reality, the “Connies” weren’t introduced until the following year, so authenticity proved fleeting).

Coppola’s insistence on “nonlinear storytelling” occasionally confounded his crew. “You will be seeing the results first, then the cause,” the director said. Thus the audience would hear, “My God, the Godfather is dead,” and next see an emerging Brando getting shot, Coppola explained. 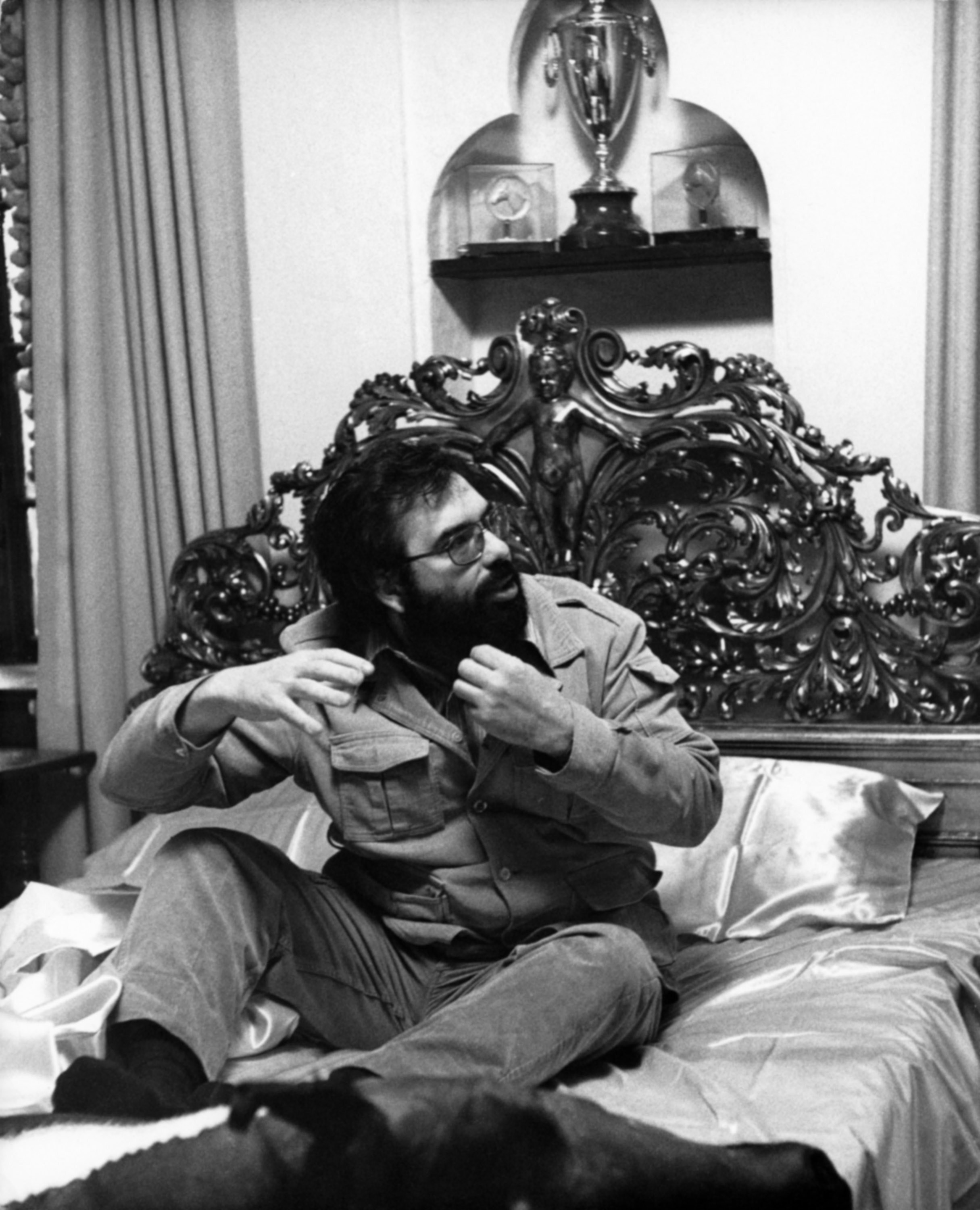 A stalwart family man, cerebral by instinct, Coppola was not a fan of violent movies, but nonetheless was stylistically obsessive about his gory action scenes. The dead horse’s head found in Jack Woltz’s bed had been designed by the Paramount special effects department and was quickly rejected as looking fake (it was), so a nervous team was dispatched to find an actual dead horse.

Coppola wrote a “special effects” memo to his team pointing out that “a close-up of a bullet hole through a shattered hand can be much more unsettling than a ton of innards and blood.”

In the restaurant assassination scene, Willis felt the makeup man did a good job in creating blood from a corn syrup base that might even congeal realistically, adding, “Blood is more believable when it has a brown-to-black kind of color.”

But Coppola wanted to follow Mario Puzo’s novel, which specified that “the blood turns into a fine mist.” Said Coppola: “The mist is wholly unrealistic but I think it is great. It worked for the novel.” His comment reflected the tight relationship that the director and novelist had formed in working together on the screenplay – a unique marriage of sensibilities.

As Seal’s book concludes, Coppola managed to fight his way through barricades in achieving his vision – problems with a devious budget-cutting studio bureaucrat and even with erratic segments of the Mafia itself. At one point in his shooting schedule, the mist of intrigue became as surreal as the mist of blood; indeed, he had become convinced that he would imminently be fired and even fled briefly to Paris to start writing another screenplay.

He was completely mistaken and misinformed about the firing, of course. His vision of The Godfather, Evans and I realized, had been brilliantly realized, his obstacles overcome.

Blood had been spilled, but it was in a worthy cause.