HE raps about sex, drugs and violence but these days Professor Green is more about nappies, milk and bedtime.

The Read All About It rapper, 37, is such a hands on dad he’s suffering from "baby brain", a condition which new mothers say affects their memory and ability to concentrate. 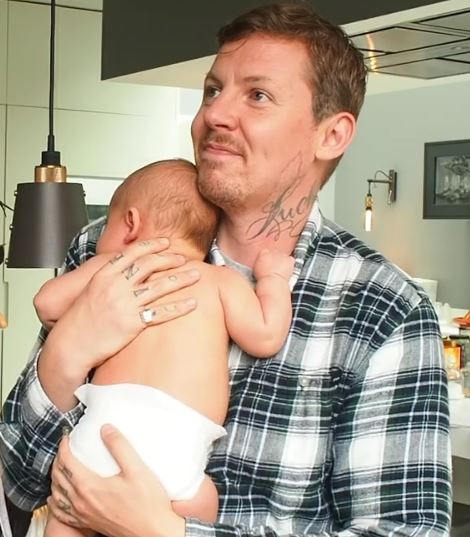 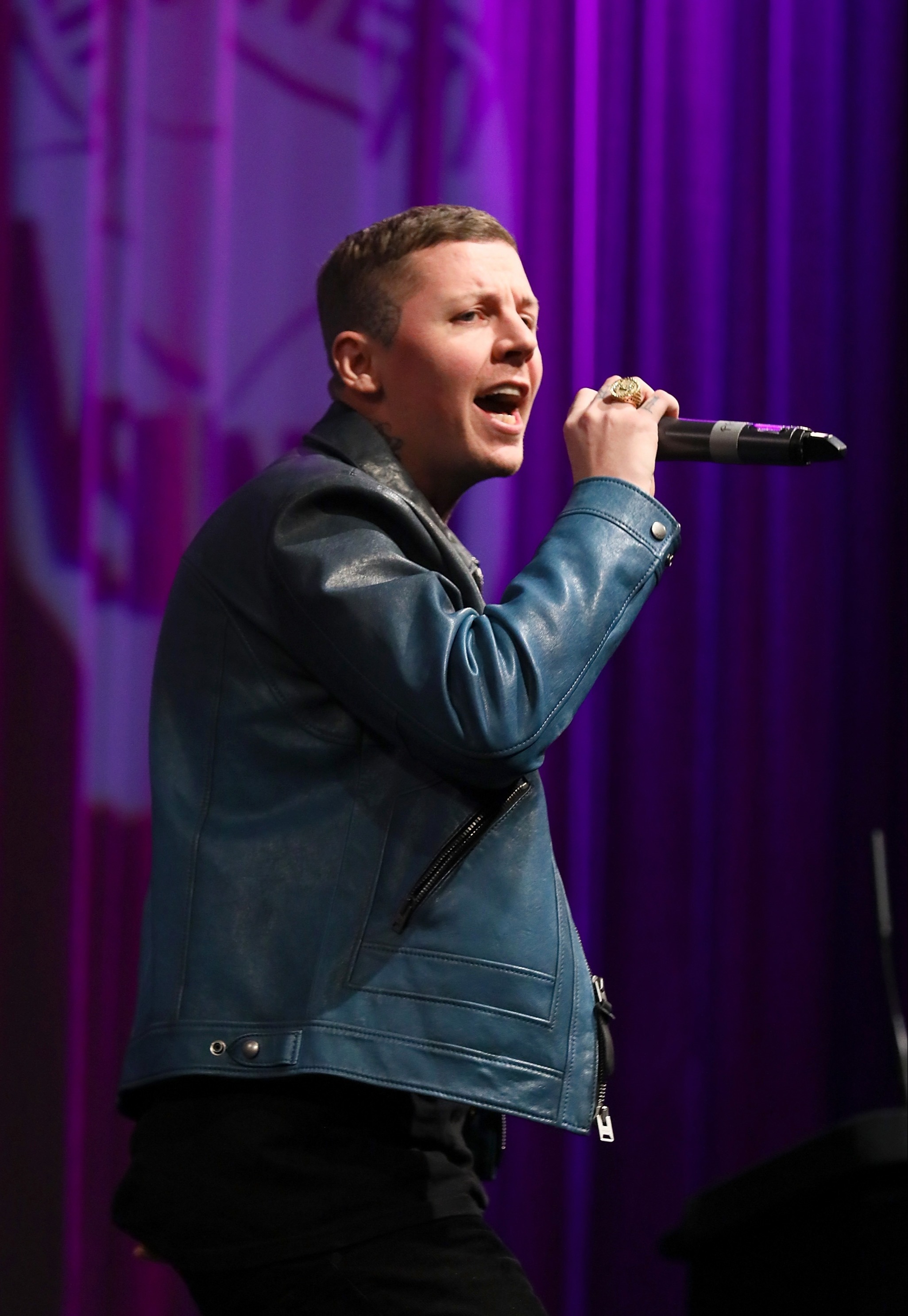 Five-month-old baby Slimane has made such an impact on his dad that he forgot his own lyrics at his first gig in two years earlier this month.

He told The Sun Online: “My short-term memory at the moment… my manager has to phone me constantly to remind me what I have to do at least eight times otherwise it’s: ‘Yeah? I'm at home, I should be where?’”

Pro Green is thrilled to be back on the music scene after freshly inking a deal with Cooking Vinyl but thanks to Covid restrictions wasn’t allowed to rehearse for his comeback gig and forgot the lyrics to one of his own songs.

He said: “I did my first gig in two years, two weeks ago. It was mental walking out on a stage 20,000 people, all not socially distanced.

"I didn't get to rehearse beforehand. I just had to walk out and pray to the gods that I would remember my lyrics, which I did in all but one song.

But he was thrilled to be back on stage.

He said: “I love having a crowd. That back and forth is what makes every gig different. It just reminded me of how much I need that outlet. That's my hobby, it’s not my job.”

The pandemic coupled with difficulties with his ex-label Sony have made releasing and performing music impossible for the rapper during the last two years.

But that has given him precious time to bond with his son, whose mum is Deep State actress Karima McAdams.

He said: “If I was working at the rate I would be normally, I would have not been here as much … the bond with him has grown so much quicker. I can change nappies. Thoroughly modern man me.

"I put him to bed, I feed him, I do absolutely everything… I bathe him, I massaging him, I oil him before bed. You know, it's all of those things.”

Fatherhood is all the more poignant for Professor Green because he was raised by his nan after his mum abandoned him as a baby and his dad walked out on him a few years later.

Thirteen years ago, his dad took his own life, so being a present father is vitally important to the rapper.

He said: “It makes me upset for my dad not having experienced those things because he missed out on some of the most incredibly rewarding things.

"I'd already long forgiven my parents. My mum was 16, my dad was only two years older, I'm over twice his age now.”

Being a rap star, a documentary maker and now a pizzeria tycoon alongside his pal Gizzi Erskine, must afford a glamorous lifestyle for Professor Green and his family.

But the rapper is finding out that babies rarely respect glamorous surroundings.

Speaking on Zoom, he said: “Look at me, I used to be together. Nothing is precious anymore. He's been sick over everything. Pooed over most things, and then peed over me.

"I did make a miraculous save when he was really young, I was just changing his nappy and he had his legs up.

"And he started going again, but I had the nappy in my hand, that Pampers right there ready. And it was taut so I stopped it from going over my shoulder and onto the headboard.”

He might not have been able to tour before now but Professor Green has been writing music which he hopes to release soon before a new album comes out.

And he has written a touching song for his son.

He said: “My great grandmother used to sleep in our living room, there were six of us in a three-bedroom flat.

"She loved me to bits. She had a blue blanket that I used to run and jump underneath even before even cartoons would come on and I always just remember jumping under her blue blanket…

"So there's a there's potentially a song relating to the comfort of that and me being able to give Slimane the security that she used to give to me.”

A NEW PLATFORM FOR DADS

As well as his new music the rapper is building a new platform for dads to meet each other and discuss their parenting needs after starting The Unlikely Dad’s Club on Instagram and being overwhelmed by the response.

Technical boffins are currently working on an app and Professor Green thinks the site could outlive his musical legacy.

He said: “We're in the process of going into a proper online platform. The engagement is insane.

"It's really important to try and create a safe space where people can have conversations about the realities of parenting, which will mean that I will have other people to contribute as well because I'm not going to experience everything that everyone does.

"And I think it's really important to extend the unlikely dads club to a network of contributors. So it's going to take a lot of work.

"But I’m looking forward to building that. I think it will run far beyond many of the things that I do. It has the potential to go everywhere and will definitely become more than a forum.”

The rapper might have mellowed but he still likes a nice drink and he’s also working with Smokehead Whisky who have asked him to contribute the worst advice he’s ever received to their Rulebook which is designed to be ripped up and burned, with the flames used to smoke-rinse a whisky glass.

Now he’s a dad and drinks less, Professor Green likes his whisky to be quality.

He said: “The idea is that you can tear the pages out, you put them in the glass, light it, cover the glass, and it smokes it.

"It's a great excuse to drink whisky. There’s no harm in having a nice glass of whisky in the evening, after the baby's gone down after a long day.

"I've got really, really grown-up chair with a little side table in my living room.”

So what is the bad advice that Professor Green believes deserves burning? “A bad idea is better than no idea”.

He said: “I was like, 'what?' I'd rather write nothing, then write something crap!”

But does he really want to tear up the Rule Book he’s contributed too? He laughed: “Rules are not something I’ve ever really abided by.”

Professor Green has teamed up with Smokehead Whisky to contribute to a 16 page, limited-edition, Rulebook filled with the “play it safe advice” the trailblazers never took. Made to be ripped up and burned to smoke-rinse a whisky glass, it’s a toast to those who follow their own path. The Smokehead Rulebook is available to buy here. 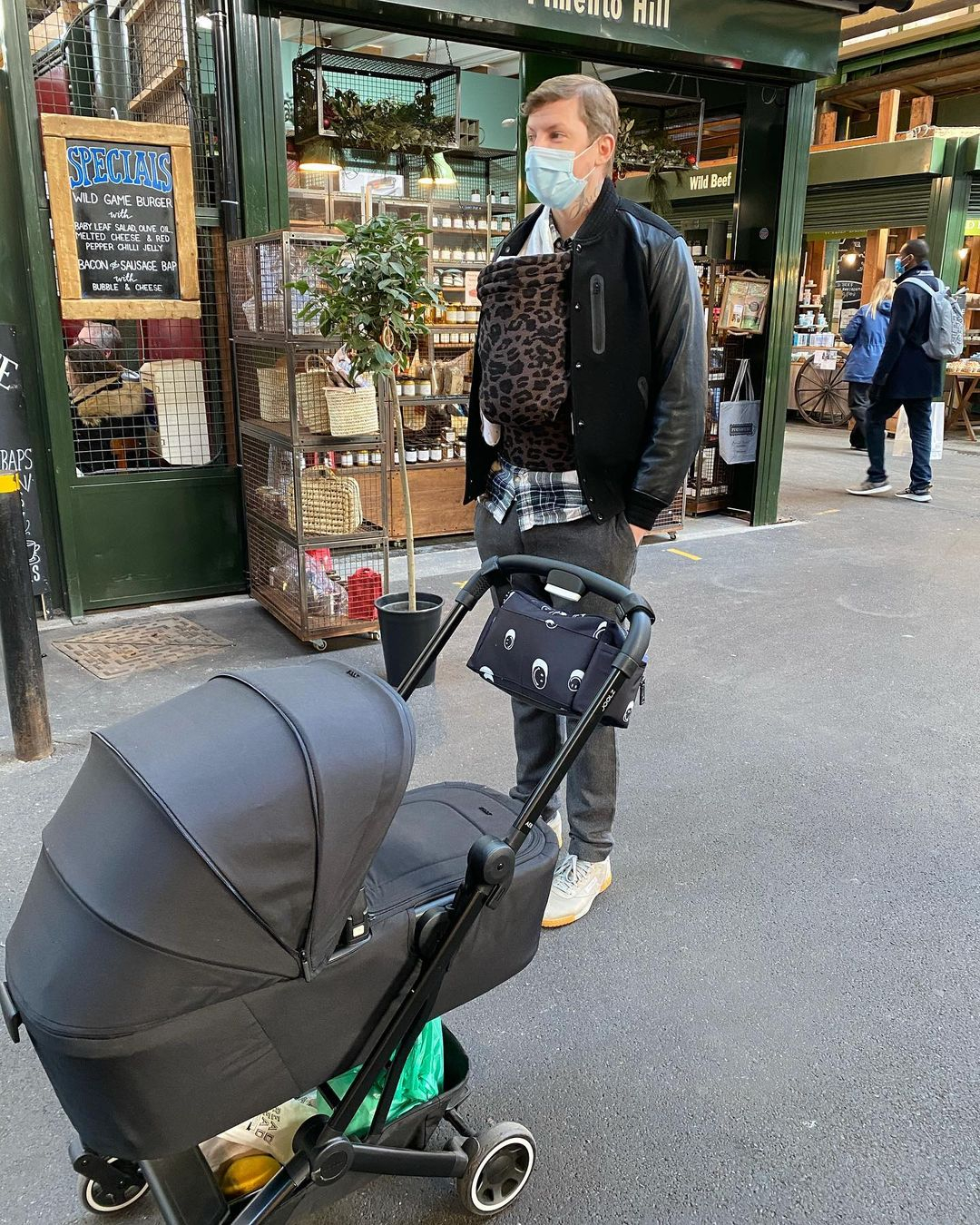 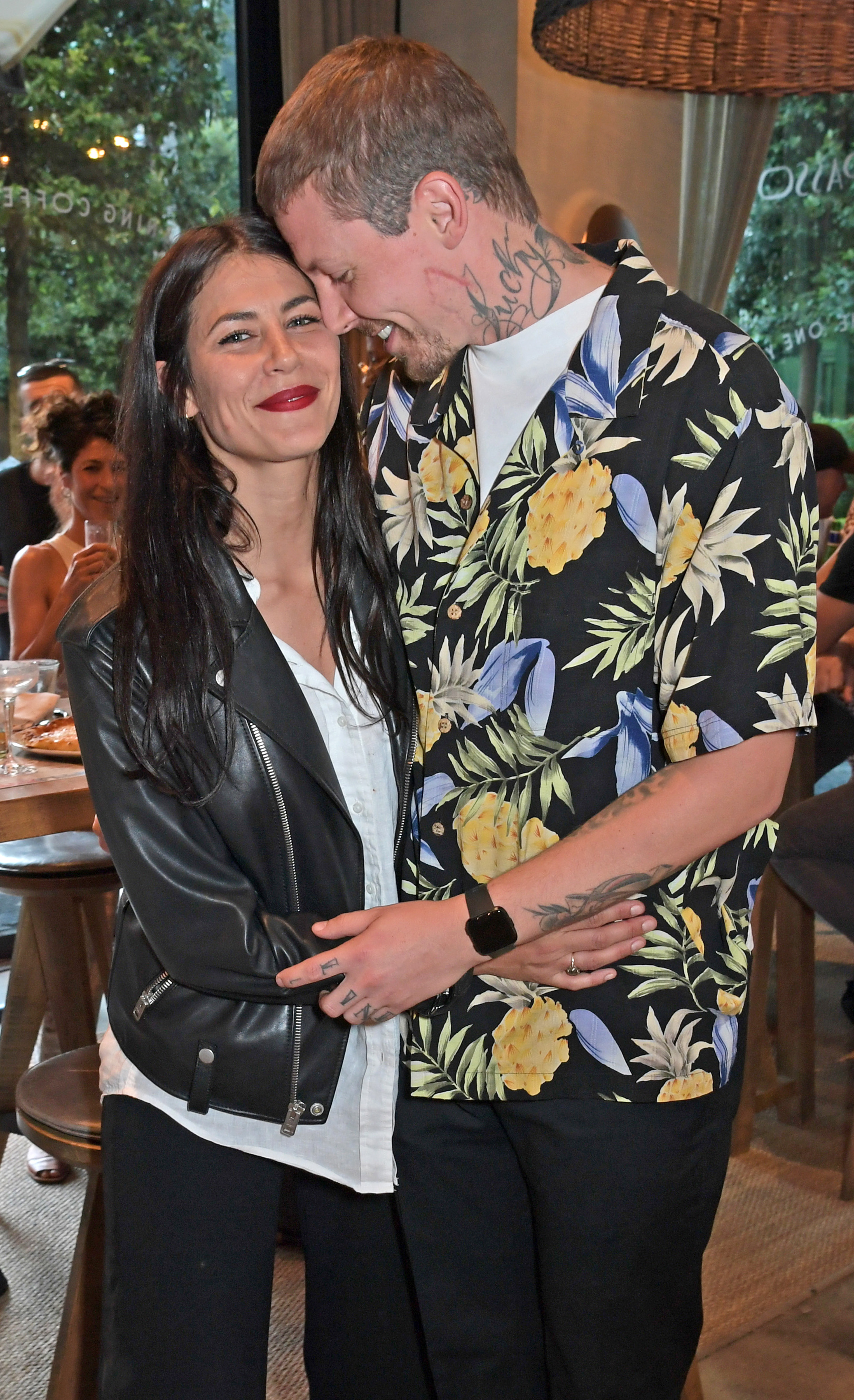 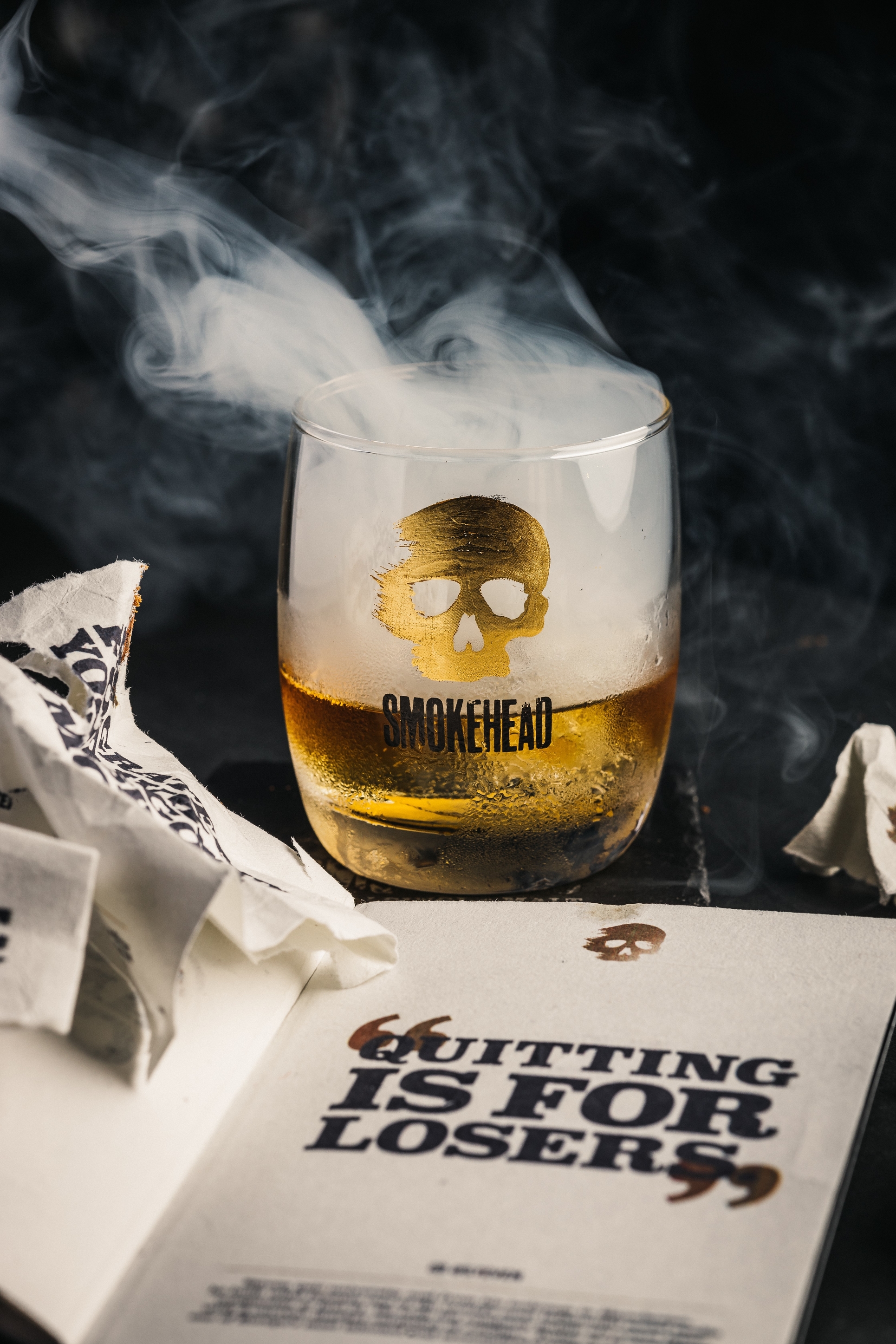