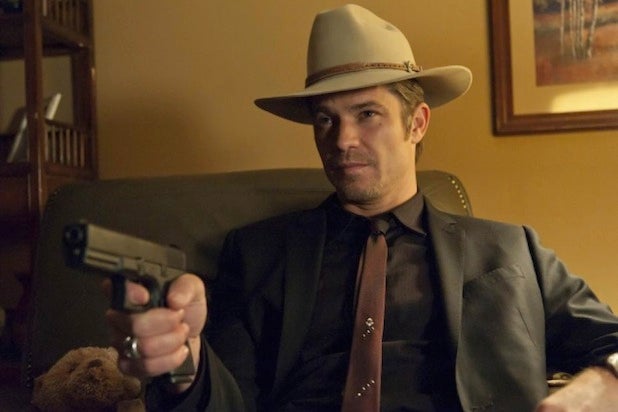 FX is developing a new series from the “Justified” team to be based on another Elmore Leonard novel, “City Primeval,” with Timothy Olyphant potentially returning as Raylan Givens, an individual with knowledge of the project told TheWrap.

Olyphant played Givens in “Justified,” which was based on Leonard’s novels centered around Givens, mostly “Fire in the Hole.” It ran for six seasons from 2010 to 2015. Givens does not appear in Leonard’s “City Primeval,” which was first published in 1980. Olyphant could also appear in the series as another character instead of Givens.

“City Primeval” follows a killer named Clement Mansell, otherwise known as the “Oklahoma Wildman,” and a Detroit homicide detective Raymond Cruz who tries to take him down. Givens is a deputy U.S. Marshall who gets reassigned to his native Kentucky following a shooting in Miami.

The FX series will be directed by Dinner. Chris Provenzano, Sarah Timberman and Carl Beverly of Timberman-Beverly, VJ Boyd, and Taylor Elmore will all return as executive producers. Peter Leonard of the Elmore Leonard Estate will executive produce in association with MGM. Walter Mosely and Ingrid Escajeda will serve as a consulting producers. Eisa Davis will produce.

Sony Pictures Television will again serve as the studio.

Variety first reported on the news regarding the new series and Olyphant’s potential return.