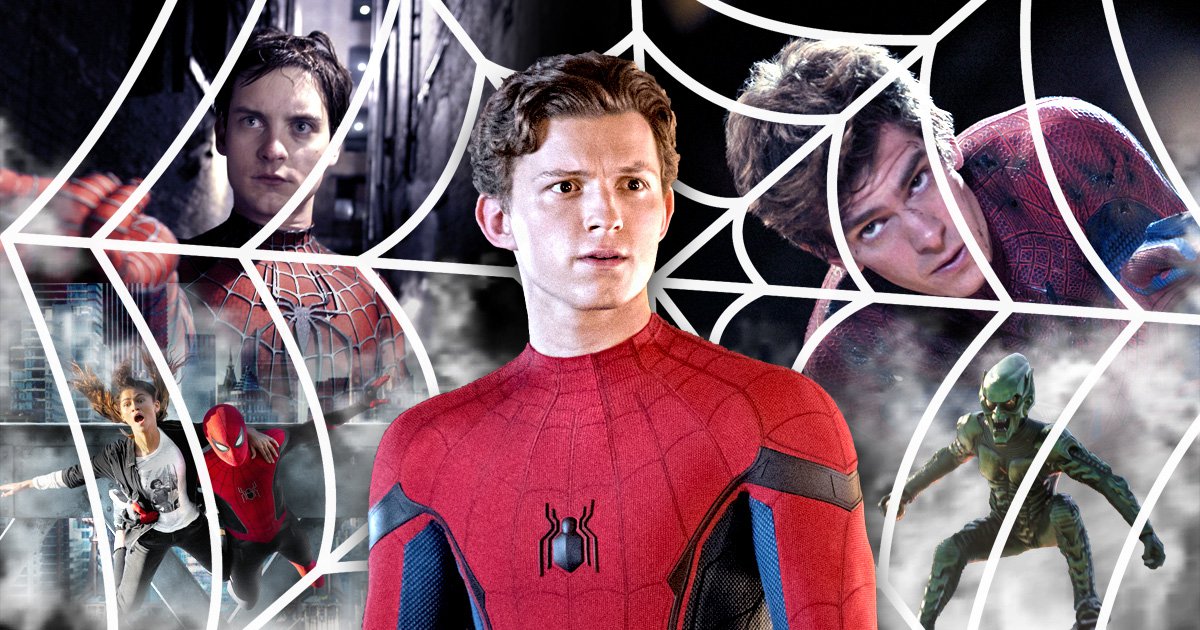 Spider-Man: No Way Home is within touching distance and, at the moment, anything’s possible.

Real-life couple Tom Holland (Peter Parker) and Zendaya (MJ) have walked the red carpet, they’ve given everyone a stark warning about spoilers, and fans are about to see if their theories have been proven right or not.

And, oh, the theories there have been.

What we do know is that Peter’s identity well and truly out there for the first time, he turns to Doctor Strange (Benedict Cumberbatch) for help – but things quickly spiral out of control.

It’s of course confirmed that various villains from past lives are coming back to haunt Spidey, and that he and MJ are figuring out their real-life relationship.

So, ahead of everything being revealed, we chatted to some superfans to find out what they want – and definitely don’t want – to see.

None of them have seen the film – this is all speculation, and their highest hopes and dreams. No pressure Sony!

Jack, co-host of the That 90s Spider-Man Show podcast and creator of No Context Spider-Man said: ‘I would’ve said no a few months back, but now it seems more possible. I think if they do, it’ll be a last-minute cameo from Tobey, and maybe Garfield turns up in a post-credit scene.’

Henry, co-host of That 90s Spider-Man podcast told us: ‘I’d say about 50/50. On the one hand, they’ve already brought Jamie Foxx, Alfred Molina and Willem Dafoe back, so they are laying the groundwork for something like it.

‘On the other hand, there might not be enough room in this movie to give Tom Holland a satisfying story, let alone bring in another two characters for us to spend time with.  And if they do put all the Spider-Man actors in this movie, what comes next for Spider-Man? What is there left to do in a Spider-Man movie?’

Spider-Man cosplayer James added: ‘I’m not entirely sure. Part of me really wants Tobey and Andrew to come back, having watched Tobey’s films when I was in school and growing up with Andrew’s films in secondary school. I don’t want me expectations to be too high so for now I’m convinced that they will be either mentioned or appear in flashbacks, but if they both do appear, I will be over the moon.’

Lui, creator of Daily Spider-Man said: ‘I would love to see a plot based around a mystery character, a hero who’s been underground saving the day behind closed doors. Someone who might of been in the world for a bit longer just helping MCU Spider-Man without him even knowing. I’d love that reveal to be Tobey Maguire. That would be epic (not sure how it would happen given he probably comes from the spell Doctor Strange casts but nonetheless it would be cool).

‘I think this is a huge ask but I don’t think Maguire’s Spider-Man or Andrew’s Spider-Man got the send off they deserved, mainly due to studio interference. I’d love to see Tobey Maguire and Andrew Garfield get some sort of send off in this film or even open the possibility to a [Sam] Raimi Spider-Man 4 and a [Marc] Webb The Amazing Spider-Man 3. This could actually be done now given the fact the Multiverse exists and the popularity surrounding these actors. FANS WANT THIS.’

Peter should go back to his roots

Jack revealed: ‘I’d love to get back to the friendly neighbourhood Spider-Man. He’s a kid from Queens and he’s a New Yorker – it would be great to see him interacting with his city like he did in Homecoming. We’ve seen him in Europe and space… I’m good to go back to his home turf and not spend too much time hopping dimensions.

‘I don’t want it to be too over-crowded with returning characters, which it might well be. As much as it’s great to see Willem Dafoe and Alfred Molina return, I hope it doesn’t end up being all about the MCU crossover part and not give time for Tom Holland and the rest of the returning cast to do their thing.’

Henry pointed out: ‘Ever since the Spider-verse-y details of NWH became public knowledge, my worry is that there might be too many cameos, storylines and disparate plot points to make a coherent movie that isn’t six hours long.

‘I’d love for them to be able to stick the landing and make a Spider-Man movie that feels like a coherent movie, rather than a series of Easter eggs and hollow acts of fan service.’

Miles Morales should be introduced now or very soon

A comic book favourite, Miles (voiced by Shameik Moore) was first introduced to the MCU in Spider-Man: Into The Spider-Verse, but could he make an appearance in the live action movies?

Lui explained: ‘It would be great to see Holland’s Spidey become a mentor to Miles in the near future especially since the character has grown in popularity recently with the huge success of Spider-Man: Into the Spider-Verse and the Spider-Man Miles Morales game on the Playstation.

‘I think this would be perfect moving forward as the first two films for this Peter was about him receiving the torch from Tony Stark so it will be good to see him pass the torch and mantle of Spider-Man to Miles Morales in the future once has has more experience.’

James added: ‘I would want Peter to finish his high school years and if there’s another movie I would want to see him go to college. The second, I would love to see Miles Morales introduced, he was hinted at in Spider-Man: Homecoming so I do hope he’s introduced soon. If one of those two things happens, I would be really happy.’

Asked what would be disappointing to see, Lui pointed out: ‘The villains not given enough time to shine, especially given how well their arcs ended in their respective Spider-Man films.’

James said: ‘The most exciting aspect of No Way Home for me is seeing the old villains come back, so I do hope we get at least one more villain to create a Live Action Sinister Six.

‘I would absolutely love to see Spider-Man take on that group in live action form, personally I would have either Vulture or Mysterio come back as the 6th member. If we get the final battle with Spidey fighting all the villains at once and the stakes are higher than before, then it would be one of the best fights we’d ever get.’

Jack added of future films: ‘If they’re going to do any more cameos in the future: Vincent D’Onofrio’s Kingpin needs to meet Tom Holland’s Spider-Man. They have a great dynamic in the comics and I’d love to see. They were enemies before he met Daredevil, who should also turn up! Those characters fit into the same world better than most other characters would.’

Henry said: ‘I want to see Paul Giamatti reprise his iconic role as the Rhino, except with the comic-accurate Rhino costume. I don’t care if it looks stupid.

‘[But] if Morbius is mentioned at all in this film, even in passing, I will weep tears of blood. Morbius was exhausting in the 90s cartoon, and back then he wasn’t even played by Jared Leto!’

Jack reflected: ‘I would like to see more smaller Spider-Man stories in the future as the character gets older, goes to college and grows up. The whole universe doesn’t have to be at stake every time! There’s so many great comics to draw from!’

Henry added: ‘Although we’ve already had two movies with Tom Holland’s Spider-Man (plus cameos in other MCU films), I don’t feel like there’s been much of a story to conclude. I think there’s definitely room for this MCU version of Spider-Man to get settled into his own world, and do some more Spider-Man stuff around New York.’

Lui pointed out: ‘I think it’s best for [No Way Home] to be left open especially given the fact it was confirmed recently that Tom Holland’s [contract was renewed].

‘I think the character has so many more stories to tell and I think the next trilogy would really benefit from upping the stakes, having more emotional moments and being more darker in tone to really help Holland’s Spider-Man grow even more stronger than he is now and I think that will come with emotional consequences and a darker story (just like with the Raimi Spider-Man trilogy and Webb’s films)’

James went on to say: ‘While I’m very hyped about this film, I am worried about how it would turn out in the end. One those things would be if they kill off a character that I really like (mainly Peter, MJ or Ned). It was absolutely heartbreaking when Iron Man died in Endgame, so I don’t think I’m emotionally ready for another one.’

Spider-Man: No Way Home is in cinemas on December 15.