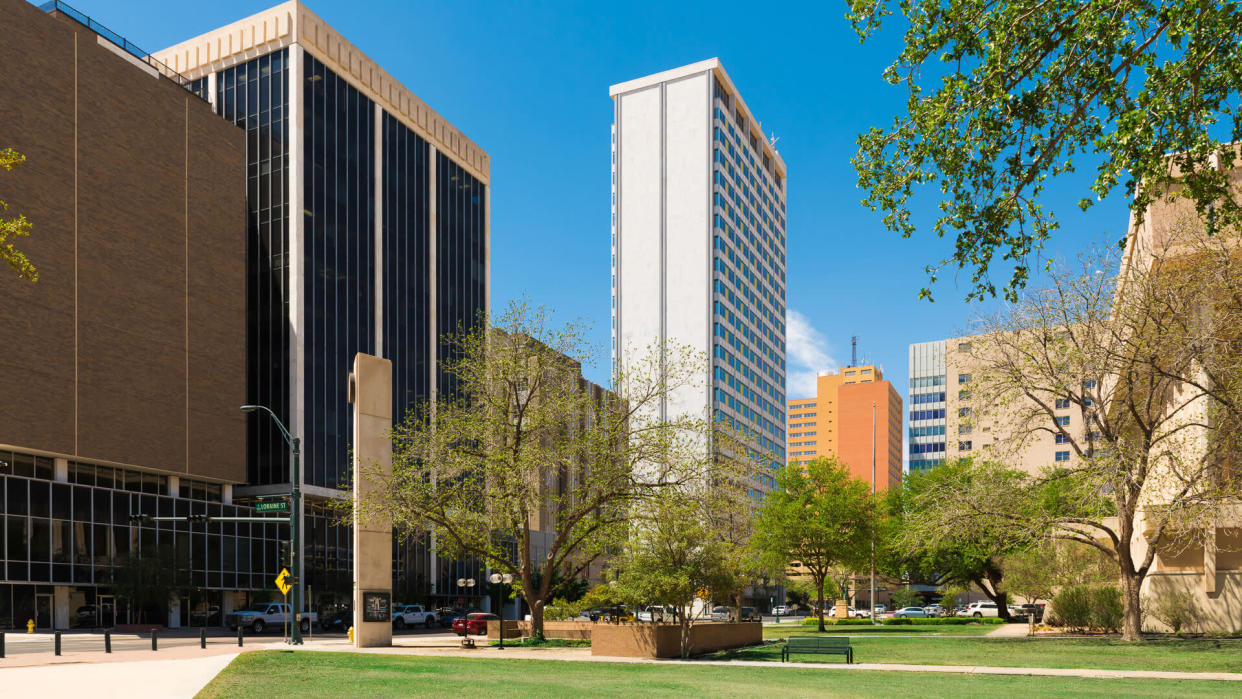 You’re planning to retire and have your sights set on a warm climate. Specifically, you want to settle down in the South, but you need to find new hometown that’s affordable on a fixed income.

See: 15 Worst States To Live on Just a Social Security Check
Find: Best Cities To Retire on a Budget of $1,500 a Month

In addition to affordability, it’s also important choose a Southern town with a sizable 65 and older population. The U.S. average is 16%, so remember this, as it will be important to your social life.

Ready to explore GOBankingRates’ findings? Here are the five best Southern cities to retire on with a budget of $1,500 per month. 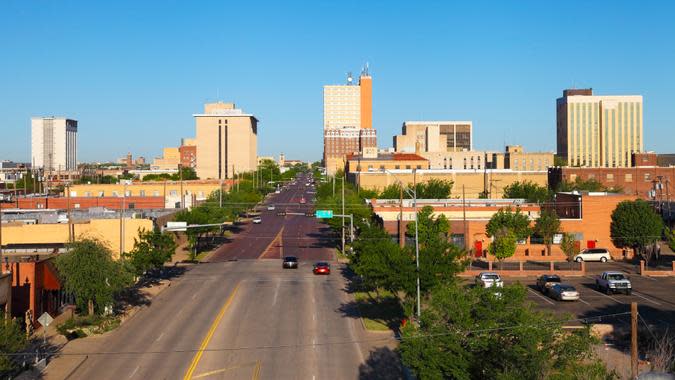 5. Lubbock, Texas
Monthly expenditures: $1,577.10
Percent of population 65 and older: 13%
Livability: 68
A major plus, the average cost of groceries in Lubbock is the lowest on the list at $378.47 per month. The average monthly cost of a one-bedroom apartment is $746.50 — still just a fraction of the $1,927 per month national average — and the average healthcare expense is $452.12 per month — higher than the national average of $431.42 per month. However, both of these numbers are the priciest of all five cities.POLL: Do You Think You Will Be Able To Retire at Age 65? 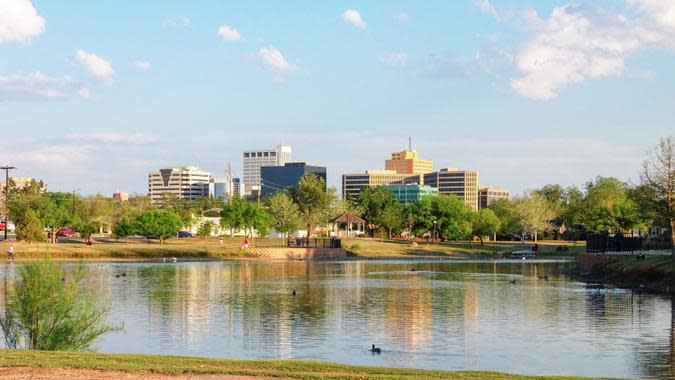 4. Midland, Texas
Monthly expenditures: $1,522.90
Percent of population 65 and older: 18%
Livability: 72
Monthly groceries are the most expensive of all cities on this list, averaging $400.30 in Midland — just under the national average of $411.83 per month. Rent is also the second highest, averaging $716 per month for a one-bedroom apartment. However, healthcare costs fall right in the middle at an average of $436.59 per month. 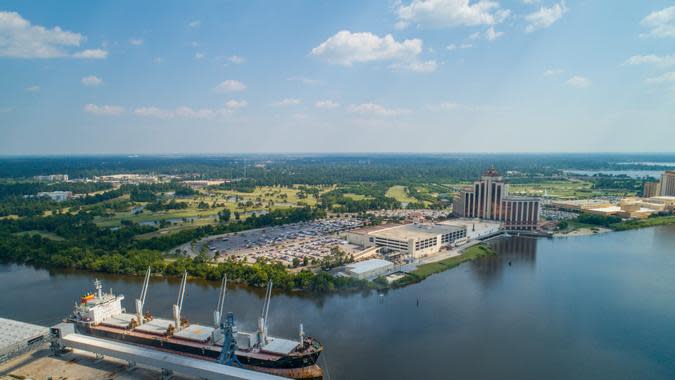 3. Lake Charles, Louisiana
Monthly expenditures: $1,410.36
Percent of population 65 and older: 15%
Livability: 70
Monthly healthcare costs in Lake Charles are the second lowest on the list, averaging $419.77. The city falls right in the middle for both the average rent on a one-bedroom apartment — $608 per month — and groceries — averaging $382.59 per month. 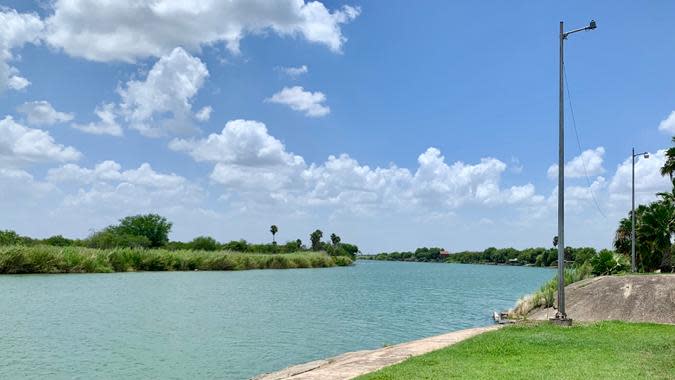 2. McAllen, Texas
Monthly expenditures: $1,363.34
Percent of population 65 and older: 11%
Livability: 81
Living in McAllen will allow you to enjoy both the lowest monthly grocery cost — averaging $379.30 — and healthcare expenses — averaging $391.29 per month — on the list. Rent is also the second lowest of all five cities, averaging $592.75 per month for a one-bedroom apartment. 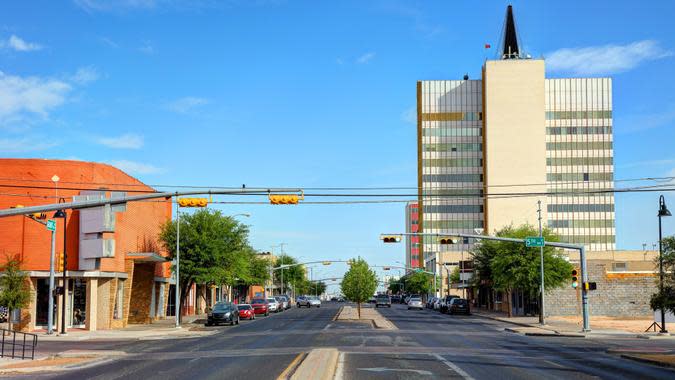 1. Odessa, Texas
Monthly expenditures: $1,336.86
Percent of population 65 and older: 10%
Livability: 62
Odessa is the best Southern city to retire with a monthly budget of $1,500, with rent on a one-bedroom apartment being the most affordable on the list, at an average of $510.50 per month. Both the average monthly grocery cost — $385.89 — and average monthly healthcare cost — $440.48 — are the second highest of all five cities, but it still comes out on top.More From GOBankingRatesStates Whose Economies Are Failing vs. States Whose Economies Are Thriving
Check Out Readers’ Favorite Small Businesses in Our 2022 Small Business Spotlight
Looking To Diversify in a Bear Market? Consider These Alternative Investments
18 Reasons Why You Should Be Using Your Credit Cards More
Methodology: To find the best Southern cities in the U.S. to retire on a monthly budget of $1,500 dollars or less, GOBankingRates first used Zillow’s 2022 rent data to find Southern cities that have an (1) average monthly rent of $750 dollars or less. GOBankingRates then used Sperling’s Best to find the cost of living index for each listed city, looking at (2) grocery and (3) healthcare index scores. Next, GOBankingRates used data from the Bureau of Labor Statistics 2020 Consumer Expenditure Survey to find the annual expenditure amount for both grocery (“food at home”) and healthcare costs for people aged 65 and older, to find how much a person 65 and over would spend on groceries and healthcare in each city on a monthly basis. GOBankingRates then added monthly housing, grocery and healthcare costs together to find where in the South a person 65 and older could survive on $1,500 or less. For a city to qualify for the study, its population had to be 10% or more over the age of 65, according to the Census Bureau’s 2020 American Community Survey. All data was collected on and up to date as of June 1, 2022.

This article originally appeared on GOBankingRates.com: 5 Best Southern Cities To Retire on a Budget of $1,500 a Month