Berlin: With German Chancellor Angela Merkel due to step aside after the coming general election, her Christian Democratic Union has slumped to its worst results ever in two regional ballots, as voters vented their frustration over the government’s handling of the pandemic and the slow pace of vaccinations.

Results released on Monday (AEDT)showed the Greens were the big winners of the Sunday election, solidifying their decade-long hold on power in Baden-Wuerttemberg with a third straight victory in the western state. They also performed solidly in neighbouring Rhineland-Palatinate, where they govern with the Social Democrats – who remained the strongest party – and the liberal Free Democrats. 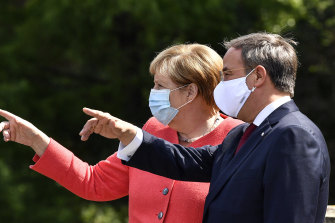 German chancellor Angela Merkel, left, and her successor as chairman of the German Christian Democratic Union, CDU, Armin Laschet, right, point during a meeting in Duesseldorf, last year. Two regional elections point in the wrong direction for their party.Credit:AP

The two elections, held under strict hygiene and distancing rules, gave voters a first opportunity to express their discontent at the ballot box over missteps in Merkel’s pandemic strategy. And the results suggest that the CDU’s new leader, Armin Laschet, has a major problem: although they’re still the strongest force nationally, support for Merkel’s bloc is dwindling and the Greens have the wind at their backs.

An alliance between the conservatives and the Greens remains the most likely outcome of September’s vote. But Sunday’s results raise the prospect of an alternative outcome.

The environmentalist party – which has only governed at the federal level once before – could instead lead a coalition that includes the SPD, the FDP or even the far-left Die Linke party. 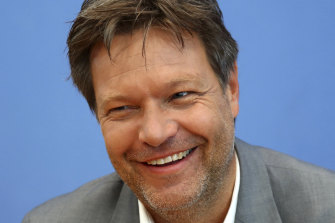 “This success will be a tail wind for the federal elections,” Greens co-leader Robert Habeck said. The results show that the party, which is polling at around 20 per cent on a national basis compared with Merkel’s CDU/CSU on just over 30 per cent, will have “various options” available after the September 26 national vote, he added.

“Public trust in politics has eroded,” Habeck said. “The reason for this is the government’s mismanagement of the pandemic and, above all, the corruption scandals” involving parliamentarians from Merkel’s bloc.

Voters initially responded positively to the ruling coalition’s management of the coronavirus outbreak. But the stuttering pace of the vaccine rollout, irritation with lockdown restrictions in place since late last year and a widening scandal over claims that some conservative MPs profited from the pandemic by taking kickbacks for selling masks have taken a toll.

Laschet – who was scheduled to hold a news conference later in Berlin to address the election results – wants to run to replace Merkel after September but is hampered by his relative unpopularity.

His main rival for the conservative nomination, Bavarian Premier Markus Soeder who heads the smaller, CSU party based in the southern state, is one of the country’s most popular politicians. While the CDU is the dominant partner and typically provides the bloc’s candidate, Soeder’s bid could be bolstered by the CDU’s poor election results.

Laschet still probably will secure the nomination on balance, according to Berenberg chief economist Holger Schmieding.

“Laschet’s position has been weakened, but it has not been critically weakened,” Schmieding said. “The losses for the CDU are not unexpected, and Laschet is probably not to be blamed for the result,” he added.

Ulrich Sarcinelli, a political scientist at the University of Koblenz-Landau, disagreed, saying Laschet’s position may be under threat even though he was only elected leader in January.

“This is a dramatically bad result,” Sarcinelli said. “It will reignite the leadership debate in the CDU.”

Despite its challenges, the conservative bloc still has a clear lead in national polls and the next chancellor probably will come from within its ranks. A decision on who will lead the ticket is expected in April.

The SPD has already chosen its chancellor candidate in Finance Minister Olaf Scholz, though his bid is a long shot with the party trailing in the polls.

The current Vice-Chancellor has been campaigning hard, seeking to profit from the conservatives’ decision to delay their choice of Merkel’s potential successor and portray himself as the man with the experience needed to run the country.

“This is a good day because it shows that the formation of a government is possible in Germany without the CDU,” Scholz said on ARD TV after the initial results. “That’s the signal from today’s elections.”