Khin Maung Zaw, the senior lawyer representing Suu Kyi, told The Sydney Morning Herald and The Age on Thursday night that Turnell, an adviser to Suu Kyi, was charged on March 25 in East Yangon District Court. Suu Kyi and three of the ministers from her government were also charged under the colonial-era act, he said. 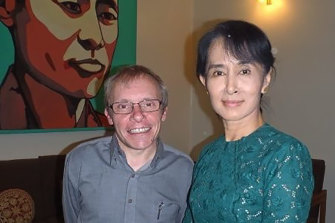 The lawyer said Turnell and Suu Kyi were charged under section 3.1C of the Burma Official Secrets Act. It refers to the collecting, publishing or distributing against the interests of the state of “any secret official code or password, or any sketch, plan, model, article or note or other document or information which is calculated to be or might be or is intended to be, directly or indirectly, useful to an enemy”.

It is punishable with a prison term of up to three years or, in the case of naval, military or air force affairs of the state, up to 14 years.

Khin Maung Zaw said “all five of them were charged under the same section” and that he would be defending Turnell and the three ministers as well as Suu Kyi, who was already facing a string of other charges.

Turnell, who was devising reform of Myanmar’s banking processes, was accused on state television last month of trying to flee the country with secret government financial information but the lawyer said he had not been given the details of the allegations being made by prosecutors against the Sydney-based academic.

“We haven’t go that information because we haven’t officially been appointed as his lawyers yet and we cannot look at the papers of that case,” he said.

The charging of Turnell, which was first reported by Reuters on Thursday night, is an alarming development for his family and friends who have said the former Reserve Bank of Australia senior analyst had not been trying to leave the country in the days after the February 1 coup and had spent years dedicating himself to improving the financial system in Myanmar.

It is also a further blow to the efforts of Australian officials in Yangon, who have been attempting to secure Turnell’s release since he was detained five days after the military seized power again.

More than 530 people have been killed in the crackdown against the pro-democracy movement in the two months since then, among them many children, as the south-east Asian nation teeters on the brink of total collapse and civil war.

Turnell was allowed to speak over the phone to his wife, Sydney economics lecturer Ha Vu, about a month ago and the junta’s spokesman said at a press conference last week the military would permit more such communication.

It has not been disclosed, however, exactly where he has been held for the past two months.

Suu Kyi had previously been hit with several less serious charges including illegally importing six walkie-talkies and violating coronavirus restrictions during last year’s election, which her National League of Democracy won in a landslide.

Her government was to begin another term on February 1 but she was arrested that morning, along with many other NLD politicians, as the country was abruptly returned to military control following a decade-long flirtation with democracy.

Two other Australians, Matthew O’Kane and Christa Avery, who have lived in Myanmar for 10 years and run a business consultancy there, were prevented from leaving the country on a relief flight nearly a fortnight ago and placed under house arrest.