This is the moment Santa Monica beachgoers were left baffled by the sight of a woman taking a giraffe out for a walk along the sand.

Cyclists, skaters and pedestrians all stopped in their tracks to stare and film the huge animal as it stepped out for a walk over Labor Day weekend.

As the giraffe walks calmly down the sandy beach, lead by three handlers, and beachgoers can be heard saying: ‘It’s not everyday you see a giraffe.’ 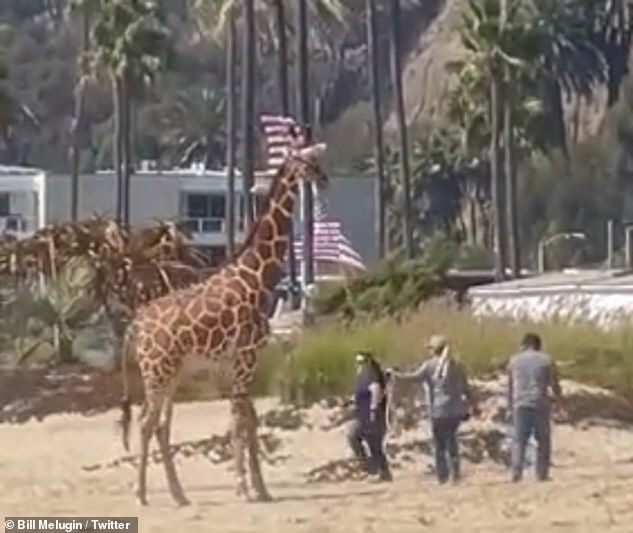 It’s since been revealed that the giraffe, whose name is Jax, had been hired as part of a Labor Day party put on by the swanky Jonathan Club in Santa Monica, California.

Bill Melugin, who shot the video, had no idea why the exotic animal was taking a stroll through the popular beach spot, but one Twitter user suspected Jax might be headed to the Jonathan Club’s annual chili cookoff.

Kim Martell wrote: ‘This may be for the Jonathan Club chili cook-off. It’s on this day every year but we’ve never had a giraffe!’

The private event reportedly hosted Jax for their party, according to Lily Nuño on Twitter, a reporter for Fox LA.  The trainer reportedly told Nuño that Jax even likes the sand.

The Jonathan Club welcomed Jax to their annual party in a Facebook post, writing: ‘Our special guest at the beach today, Jax! Happy Labor Day!’ with a red heart emoji.

The club even deck out the animal’s pen in American flags in photos posted to their social media, showing guests smiling and taking pictures with the friendly giraffe.

Most Twitter users joked that the moment was ‘peak LA’.

Another continued the joke, making light of the animal’s long neck: ‘I’d stick my neck out and say…that looks like a giraffe #support.’

While most were amused at seeing such an animal on the beach enjoying the hot holiday weekend, some thought it was distasteful to host an animal at the party and were concerned for its health.

One wrote: ‘Seems obnoxious, considering the giraffe is in direct sun with no water(?). People can be disgusting.’

Another wrote: ‘I hope that beautiful creature is okay…I hate seeing this…’

ABC 7 reported the California valleys were experiencing triple digit temperatures, with many flocking to the beaches to cool off.

Daily Mail contacted the Jonathan Club for a comment, but did not hear back before publication.