Mumbai: A baby was found floating down the Ganges in a colourful wooden box by an Indian boatman who heard her cries from the riverbank.

Gullu Chaudhary fished the box out of the water and found the three-week-old baby cushioned on a red blanket with a horoscope card listing the time and date of birth and a note naming the girl “Daughter of the Ganga”. 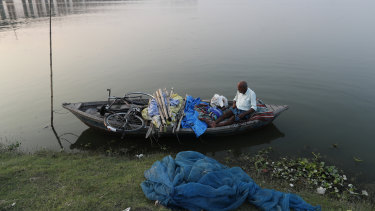 An Indian boatman rests in the river Ganges on a hot summer day on the outskirts of Prayagraj, Uttar Pradesh, India, Sunday.Credit:AP

Videos taken by onlookers show Chaudhary cradling the baby in his arms as people gathered around the banks of the river in the Sadar Kotwali area of Ghazipur City.

He took the infant home and his family members volunteered to raise the child.

However, locals later informed the police and officers arrived at the boatman’s home and took the baby into care.

Officials said the infant was in good health and that Chaudhary would receive a house and benefits for his heroic rescue.

Officials also announced they had launched an investigation into how the child had ended up in the river and would teach the perpetrators of the “inhumane act” a “tough lesson”.

Stories of baby girls being dumped outside hospitals and shelters are regularly reported in the Indian media.

Despite many campaigns to change people’s perceptions, girls are still seen as a financial burden in many poor, rural households as families must pay an expensive dowry when they marry.

While sex selective abortions and IVF are illegal they remain commonplace.

The 2020 State of World Population report, published by the UN, revealed 45.8 million missing female births in India over the last 50 years.