What a shambles! The knives are out for Jacob Rees-Mogg and Chief Whip Mark Spencer as Boris Johnson is told to ‘clear out’ No10 top team

Allies of Boris Johnson last night told him to sort out the ‘shambles’ in No 10 as backbenchers warned his authority has been ‘truly shattered’.

Senior Conservatives urged the Prime Minister to conduct a major overhaul of his top team in the wake of his botched handling of the Owen Paterson sleaze row.

Lord Moylan, an adviser to Mr Johnson during his time as London mayor, said the Prime Minister was being ‘let down badly’ by both his ministers and inner circle in Downing Street. 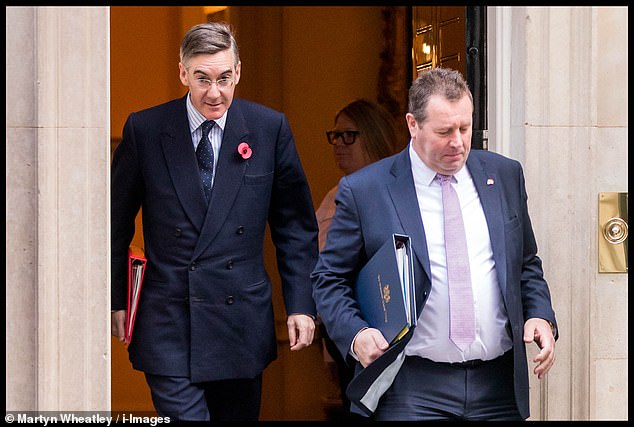 Jacob Rees-Mogg, Leader of the House of Commons and Lord President of the Council and Chief Whip Mark Spencer are blamed for their  ‘disastrous strategy’

‘There’s no escaping the fact that the No 10 operation is a shambles, worst for decades,’ said the Tory peer.

‘It needs a thorough clear out, with new people who both share the PM’s ambitions for the UK and can think out consequences of what they do.’

He added: ‘As for the Cabinet, there are lots of capable people at different levels in the Government but we don’t see them and instead continue with a Cabinet that, at best, fails to inspire and, at worst, fails to deliver.

‘Boris Johnson deserves better. [It is] not too late for him to act on this.’

The warning came as Tory MPs vented their fury at being ordered to vote to tear up the Commons disciplinary system to stop Mr Paterson from being suspended for 30 days, only for the Government to perform a spectacular U-turn the next day.

Backbenchers said it would be impossible for the party whips to assert their authority when there are difficult votes in future.

‘The power of a three line whip is well and truly shattered,’ one said. ‘There is a huge disconnect between the Downing Street team and the parliamentary party.’

Another said the ‘knives are out’ for Chief Whip Mark Spencer and Commons Leader Jacob Rees-Mogg, who are blamed for the disastrous strategy.

Cabinet minister Nadhim Zahawi yesterday conceded the Government made ‘a mistake’ in its attempt to protect Mr Paterson.

The Education Secretary said it should not have been combined with a wider move to overhaul the Commons standards regime.

‘The Prime Minister has always been very clear that paid lobbying is not allowed,’ he told Sky News. ‘The mistake is the conflation of creating a fairer system with the right of appeal for Parliamentarians to be able to put forward an appeal process.

‘Conflating that with the particular case of Owen Paterson was a mistake… upon reflection yes it was a mistake.’ 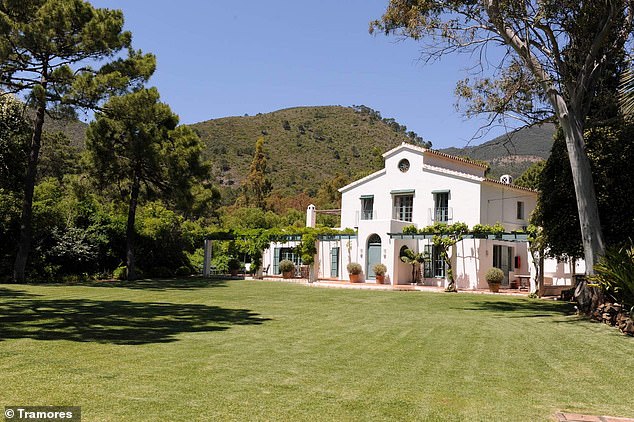 Boris Johnson went on a foreign holiday for the first time in nearly two years, jetting off to Marbella with his pregnant wife Carrie and their son Wilf, pictured is their private villa on the Costa sel Sol

‘The reputation of the House of Commons as an institution and MPs of all parties will have been damaged by the events of the last 24 hours.’

The former Conservative MP also said the affair has ‘weakened the Government’, making it harder for Mr Johnson to win support from backbench MPs on potentially unpopular measures in future.

‘If you ask your troops to march through the lobby on something like this – which they don’t think is right – and then you U-turn on it, it’s going to be more difficult next time around,’ he said.

Lord Barwell, who was Theresa May’s chief-of-staff, said the decision to whip MPs to vote for Mr Paterson to be spared punishment was a ‘terrible mistake’.

He told LBC Radio: ‘The Prime Minister… will have significantly dented his reputation with Conservative MPs who will be livid that they were whipped to vote for something, took a huge amount of flak understandably from their constituents, and then saw a U-turn in less than 24 hours. 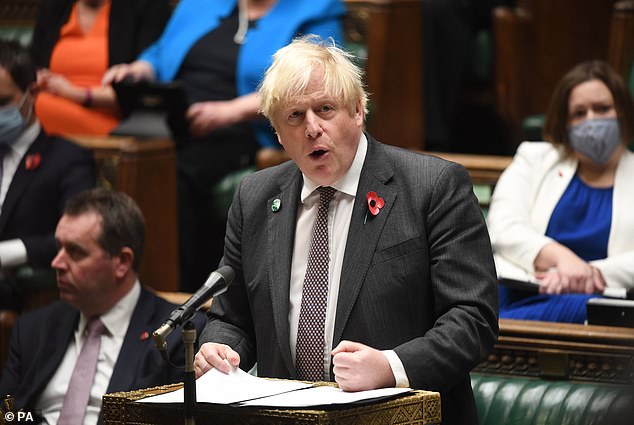 ‘It remains to be seen how much damage is done to the standing of the Conservative Party with the general public.’

‘I personally think the Leader of the House’s position has become untenable. He has created a crisis for Parliament by standing out and talking for 45 minutes in favour of a motion that was the direct, polar opposite of the rule of law,’ Mr Bryant told the i paper.

He also revealed that Kathryn Stone, the independent standards commissioner, has been given additional security as a result of an ‘orchestrated smear campaign’ against her.