Almost 400,000 Britons could head abroad on holiday this weekend in the first mass getaway since the pandemic began.

With the end of quarantine for the fully vaccinated and children visiting amber list countries coming at the end of the school year for most pupils, packed flights are expected to leave the UK this weekend.

A study by flight data firm Cirium showed that 352 of the 2,100 flights due to depart this weekend are heading to Greece. That is just 5 per cent lower than in the same weekend in 2019.

However the mass exodus came as a senior Government minister suggested people holiday in the UK this year instead of seeking a foreign destination.

Business Secretary Kwasi Kwarteng said he would be holidaying at home this year as a ‘personal choice’.

Asked on Sky News if he planned to jet abroad he said: ‘I personally wouldn’t because I like staying at home and also I think that it is less complicated actually, if you just stay at home and enjoy the British weather. 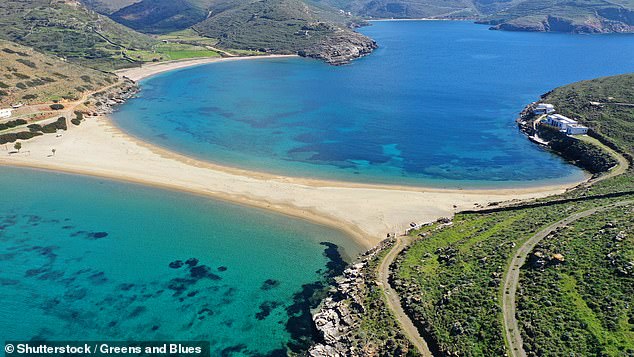 A study by flight data firm Cirium showed that 352 of the 2,100 flights due to depart this weekend are heading to Greece. Pictured is the beach of Kolones on the island of Kythnos 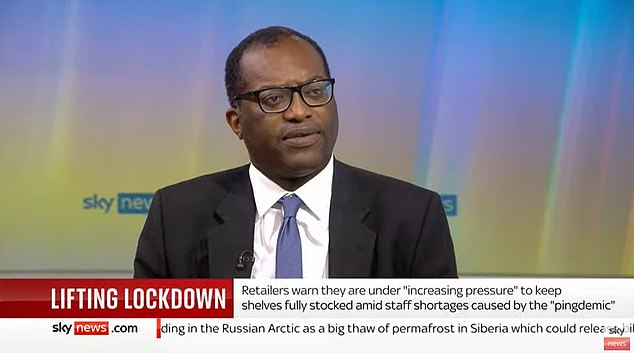 Business Secretary Kwasi Kwarteng said he would be holidaying at home this year as a ‘personal choice’.

Heatwave set to end with storms and heavy rain ahead

A heatwave which has baked the UK over the last few days is expected to end with thunderstorms across much of England and Wales this weekend, forecasters have warned.

The Met Office last night issued a yellow weather warning across much of England and Wales on Saturday and Sunday, saying heavy rain and thundery showers could cause flooding and transport disruption.

The weather warning was issued the day after England reached its hottest temperature of the year on Tuesday – 32.2C recorded at Heathrow Airport in west London.

The mercury rose to 31.1C in North Wyke, Devon, on Wednesday, while a provisional all-time record for Northern Ireland was set when 31.3C was logged at Castlederg, Co Tyrone, the Met Office said.

It comes only a few days after the previous record of 31.2C was set at Ballywatticock, Co Down, on Saturday.

Scotland saw a top temperature of 28C in Eskdalemuir on Wednesday while 30.8C was recorded in Usk in Wales.

‘The thing about going overseas is that there are rules over there as well, so it can complicate things – if people go to France they will be subject to rules in France, the French were saying they might expect people going to France to quarantine and those rules change.

‘So for this year, this summer, I’ve made the decision to stay at home.’

However, while England and Wales especially are experiencing a brief heatwave, it is all expected to end in heavy storms at the weekend.

The Met Office last night issued a yellow weather warning across much of England and Wales on Saturday and Sunday, saying heavy rain and thundery showers could cause flooding and transport disruption.

Heathrow, Gatwick, Stansted and Manchester airports are set for their busiest weekends of the year so far, the Times reported.

It came as staisticians demanded No10 ‘urgently’ release the data that persuaded ministers to hit France with new ‘amber-plus’ list restrictions, statisticians have demanded.

Experts want the Government to justify the move, which has sparked holiday misery for thousands.

Currently, anyone who arrives from France must self-isolate for 10 days even if they are double-jabbed. But people who’ve had both vaccine doses and are arriving from other ‘amber’ list areas do not have to quarantine.

The Government says its brought in the new restrictions because of the ‘persistent presence’ of the South African ‘Beta’ variant, which scientists say can dodge immunity from vaccines.

But data shows Spain and Greece have more cases of the mutant variant, prompting scientists to question the ‘bizarre’ decision. Infection rates are also higher in both the holiday hotspots.

It prompted fears Spain, Britain’s most popular holiday destination, may also be subject to the strict rules.

But ministers last night insisted there were no plans to add the country to the same amber-plus list, despite the Beta variant being more prevalent there.