Concern for the Queen’s health as she pulls out of second Jubilee event: Her Majesty, 96, cancels trip to Epson Derby due to mobility issues – but will watch horseracing on TV from Windsor

The Queen will not attend the Epsom Derby tomorrow, Buckingham Palace has announced.

The monarch is however expected to watch the major sporting event on television from Windsor Castle, Buckingham Palace confirmed.

The news comes after Her Majesty was forced to pull out of today’s Service of Thanksgiving at St Paul’s Cathedral, with Buckingham Palace saying she was suffering from ‘discomfort’ following her appearances yesterday.

The Queen appeared twice on the balcony of Buckingham Palace to watch Trooping the Colour and the flypast of 71 aircraft and then travelled back to Windsor Castle to light the first in a chain of more than 3,500 Platinum Jubilee beacons.

The Queen has been forced to cancel a string of engagements in recent months and most recently missed the State Opening of Parliament in May. Her son, Prince Charles, and grandson, Prince William, stood in for her.

Today’s service at St Paul’s was attended by more than 2,000 guests, including senior royals and politicians.

Harry and Meghan Markle were kept apart from Prince William, Kate, Prince Charles and Camilla, with royal aides ensuring they sat on the other side of the aisle – and they later left separately.

Buckingham Palace officials took great care to try to avoid a repeat of the frosty scenes when the Sussexes and Cambridges sat near each other and left together at their last joint event in March 2020 at Westminster Abbey.

And aides would have been delighted that today’s service passed without any such incident or negative ‘optics’ given the attempts to ensure today was about the Queen and her 70-year reign. 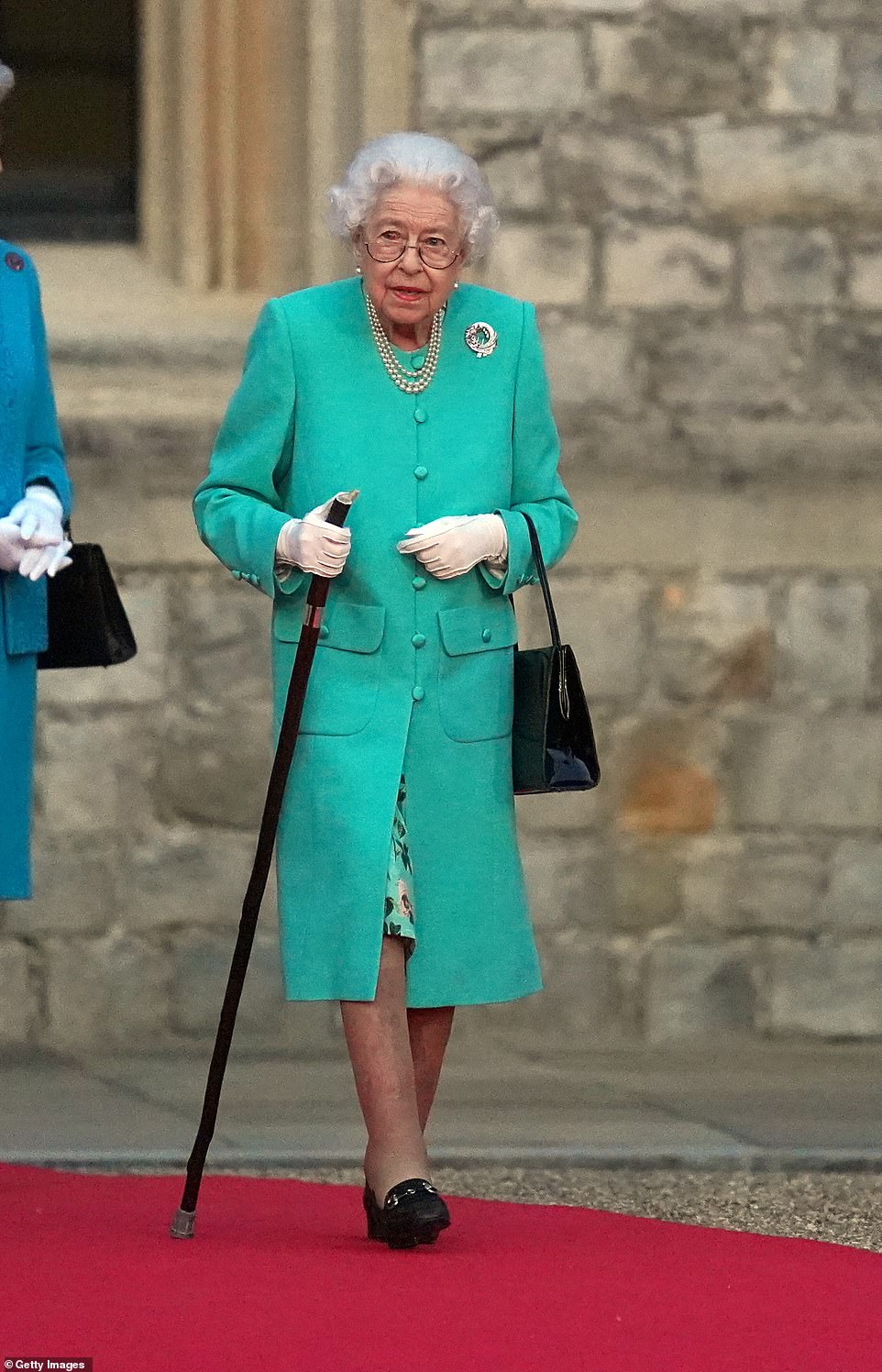 The Queen will not attend the Epsom Derby tomorrow, Buckingham Palace has announced. The news comes after Her Majesty was forced to pull out of today’s Service of Thanksgiving at St Paul’s Cathedral 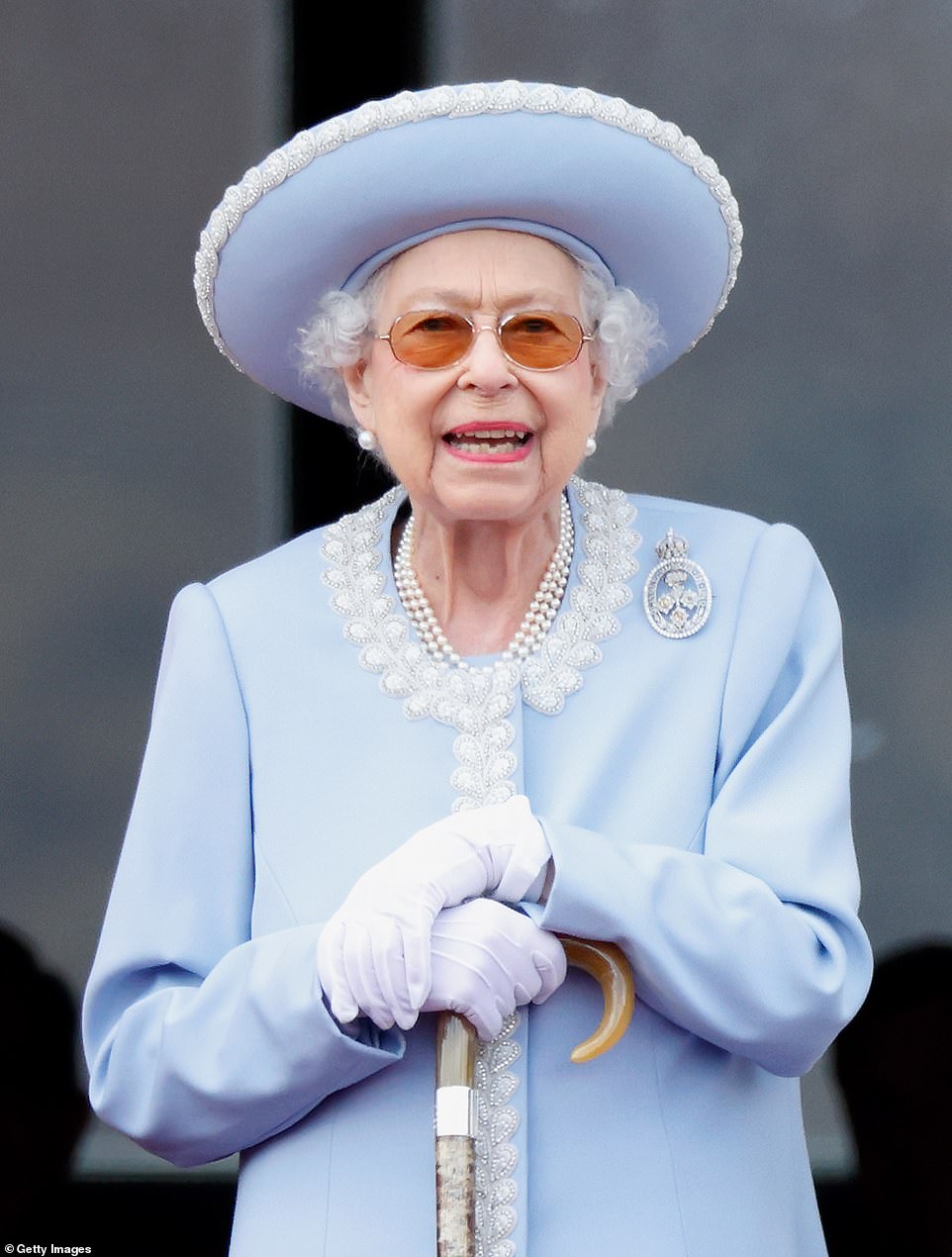 The news comes after Her Majesty was forced to pull out of today’s Service of Thanksgiving at St Paul’s Cathedral, with Buckingham Palace saying she was suffering from ‘discomfort’ following her appearances yesterday. Above: Her Majesty during yesterday’s flypast

The Queen – passionate horse owner and breeder – would have been looking forward to seeing her horse running on Saturday during her Platinum Jubilee celebrations.

Despite ‘episodic’ mobility issues that forced her to miss the State Opening of Parliament, Her Majesty has attended a string of engagements in recent weeks, including the Chelsea Flower Show and the Royal Windsor Horse Show.

Her appearances yesterday delighted Britons who had turned out in the tens of thousands in central London and Windsor in the hope of catching a glimpse of Her Majesty.

The announcement that she would not attend the St Paul’s service came before she lit the principle beacon at Windsor Castle.

The Palace said: ‘The Queen greatly enjoyed today’s Birthday Parade and Flypast but did experience some discomfort.’

In a full statement a spokesperson added: ‘Taking into account the journey and activity required participate in tomorrow’s National Service of Thanksgiving at St Paul’s Cathedral, Her Majesty with great reluctance has concluded that she will not attend.

‘The Queen is looking forward to participating in tonight’s Beacon lighting event at Windsor Castle and would like to thank all those who made today such a memorable occasion.’

Her Majesty’s hopes of winning on Epsom Derby day have already come to an end after her only runner was pulled out of a race.

Just Fine had been entered to feature in the penultimate race, the World Pool Northern Dancer Handicap, staged over the full Derby course and distance of one mile and four furlongs.

However, it was removed at Thursday’s 48-hour declaration stage.

In May, her horse Reach For The Moon, who was among the favourites, and two others were withdrawn.

The Jockey Club announced the three thoroughbreds were among a large number who had been ‘scratched’ from the entry list.

Thoroughbreds owned by the Queen have won four out of the five flat racing classics – the 1,000 Guineas and 2,000 Guineas, the Oaks and the St Leger – with only the Derby eluding her. 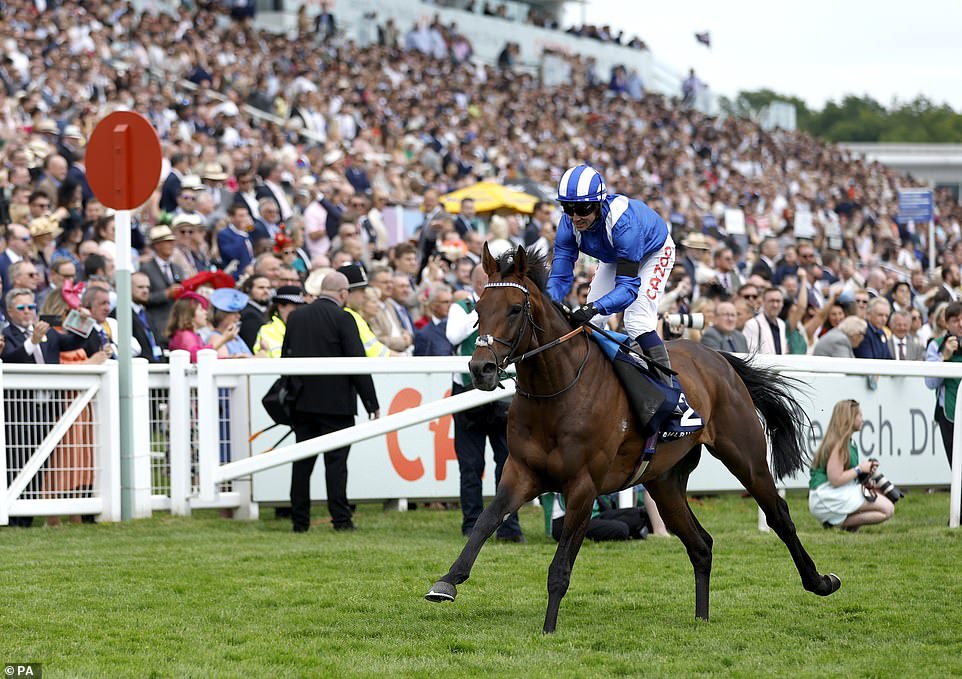 The head of state is a passionate horse owner and breeder and would have been looking forward to seeing her horse running on Saturday during her Platinum Jubilee celebrations. Above:  Hukum ridden by Jim Crowley wins the Dahlbury Coronation Cup on Ladies Day during the Cazoo Derby Festival 2022 at Epsom Racecourse today