Pictures have emerged of the suspected gunman in yesterday’s deadly Copenhagen shooting, which claimed the lives of three people.

Three others remain in critical condition following the tragedy, Danish Police have confirmed.

A 22-year-old man was arrested after the shooting with no-one else thought to be involved in the attack.

Danish broadcaster TV2 has published a grainy photo of the alleged gunman, a man wearing knee-length shorts, a vest, and holding what appeared to be a rifle in his right hand.

The weapon is believed to be a Scandinavian Target Rifle.

In video footage, the suspect can be seen placing the gun over his shoulder as he walks through the Fields shopping centre, which is on the outskirts of Copenhagen.

The city’s police inspector Soren Thomassen said the victims of last night’s shooting included a man in his 40s and two ‘young people’.

He described the suspect as an ‘ethnic Dane’, a phrase typically used to mean someone is white. 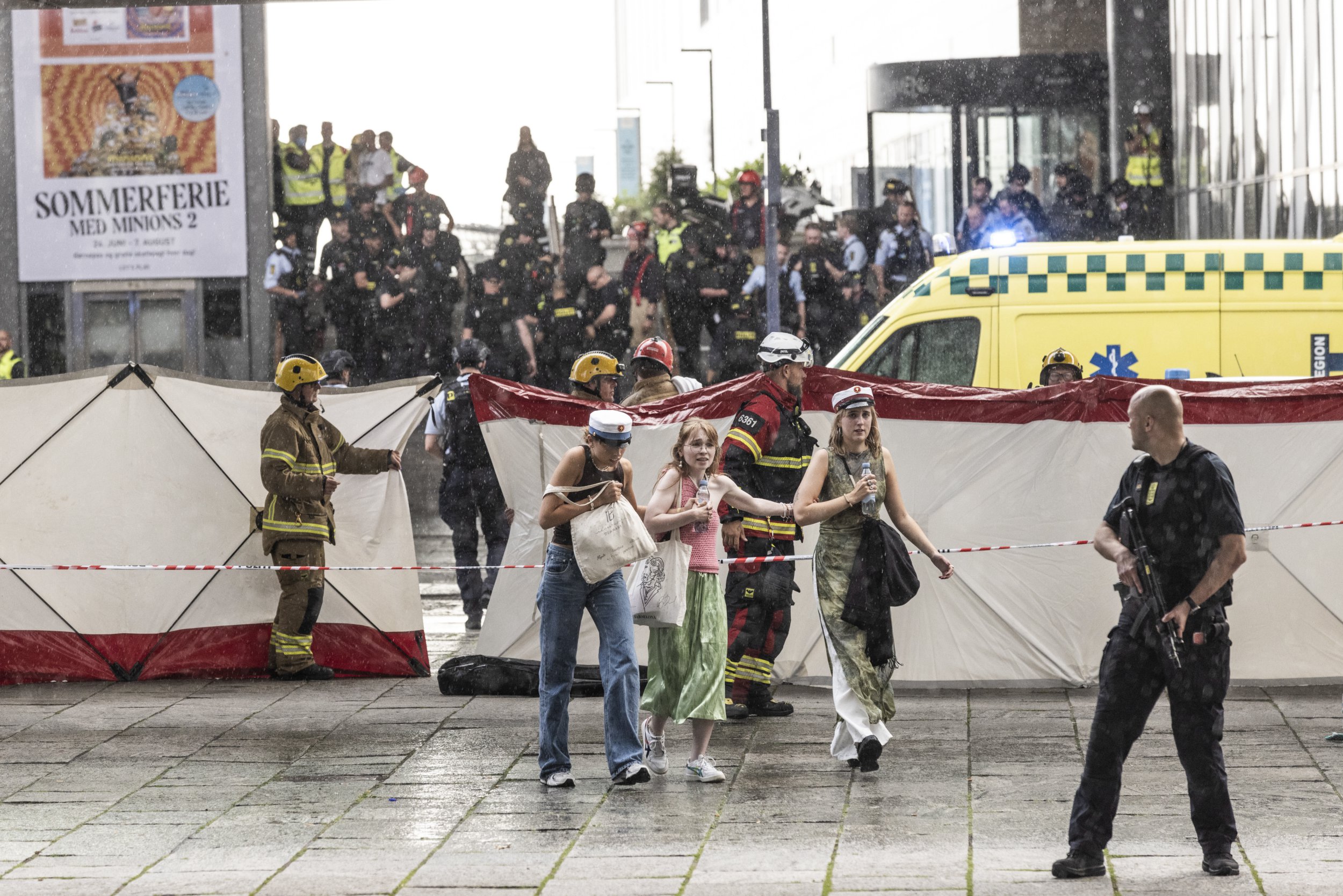 Police received the first reports of the incident at 5.37pm, and arrested the suspect 11 minutes later.

Danish Prime Minister Mette Frederiksen said the Scandinavian country had been hit by a ‘cruel attack’.

‘It is incomprehensible. Heartbreaking. Pointless,’ she said. ‘Our beautiful and usually so safe capital was changed in a split second.’

Images from the scene showed people running out of the mall, and TV2 posted a photo of a man being put on a stretcher.

After the shooting, an enormous contingent of heavily armed police officers patrolled the area, with several fire department vehicles also parked outside the centre.

The attack came hours before Harry Styles was due to perform at a concert venue less than a mile away. The gig was cancelled following the tragedy.

In a Snapchat message, the British singer wrote: ‘My team and I pray for everyone involved in the Copenhagen shopping mall shooting. I am shocked.’

Speaking to the Jyllands-Posten newspaper, eyewitness Emilie Jeppesen had said: ‘You didn’t know what was happening. Suddenly there was just chaos everywhere.

‘We were sitting and going to eat and suddenly we could see people running.

‘Then we first thought “why do people run?” But then we could hear shots.’

The first three stages of the race were held in the country this year. The reception was due to be held on the royal yacht that is moored in Soenderborg, the town where the third stage ended.

In a joint statement, Queen Margrethe, her son Crown Prince Frederik and his wife, Crown Princess Mary, said: ‘We do not yet know the full extent of the tragedy, but it is already clear that more people have lost their lives and that even more have been injured.

‘The situation calls for unity and care.’

The shooting came a week after a mass shooting in neighbouring Norway, where police said a Norwegian man of Iranian origin opened fire during a LGBTQ festival, killing two and wounding more than 20.

Last night’s incident was the worst gun attack in Denmark since February 2015, when a 22-year-old man was killed in a shootout with police after going on a shooting spree in the capital that left two people dead and five police officers wounded.