Chinese man, 33, who went to doctors with urinary problem is shocked to learn he was born with ovaries and a uterus – and has been menstruating for 20 years

A man in China who thought he had a urinary problem was shocked to find out he was born intersex and has been menstruating for the last 20 years.

Chen Li, 33, whose name has been changed, was told by doctors he was born with female sex chromosomes as well as ovaries and a uterus, despite having male genital organs.

Chen, from a small town in the Sichuan province, only discovered he was also female after he went to doctors for help with a recurring urinary problem, reports the South China Morning Post.

The man, who had been suffering from blood in his urine for more than 20 years and had pain in his abdomen every month, had actually been menstruating.

Chen, who was horrified to find out he was intersex after 33 years living as a man, has since had his uterus and ovaries surgically removed.

Chen, who was horrified to find out he was intersex after 33 years living as a man, has since had his uterus and ovaries surgically removed 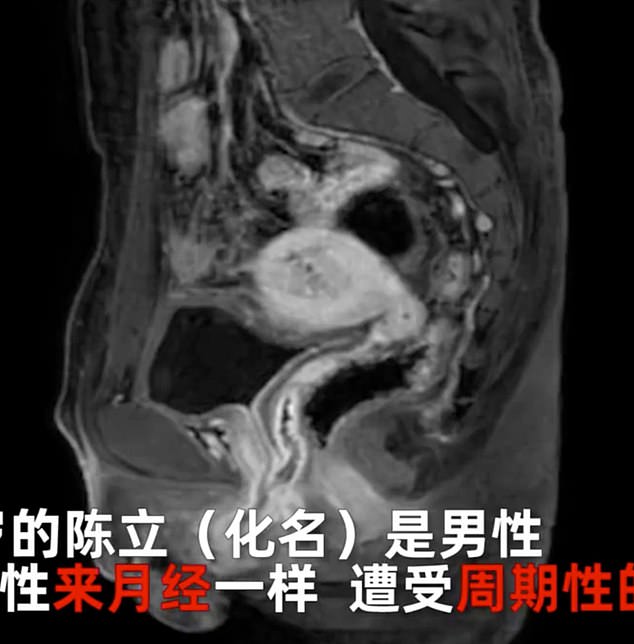 Chen Li, 33, whose name has been changed, was told by doctors he was born with female sex chromosomes as well as ovaries and a uterus, despite having male genital organs

Intersex is an umbrella term for a number of conditions in which a person is born with a reproductive or sexual anatomy doesn’t fit the typical definitions of female or male.

As in Chen Li’s case, a person might be born appearing to be male on the outside, but having female anatomy on the inside – or vice versa.

Or a person may be born with mosaic genetics, so that some of their cells have XX chromosomes and some of them have XY.

HOW COMMON IS INTERSEX?

They are a larger group than is commonly acknowledged.

DOCTORS ARE DIVIDED ON WHAT IS INTERSEX

‘In our work, we find that doctors’ opinions about what should count as “intersex” vary substantially.

‘Some think your brain has to be exposed to an unusual mix of hormones prenatally to count as intersex—so that even if you’re born with atypical genitalia, you’re not intersex unless your brain experienced atypical development.

‘And some think you have to have both ovarian and testicular tissue to count as intersex.’

The 33-year-old had baffled doctors with his condition after he experienced recurrent blood in his urine and abdominal pain that lasted for more than four hours after going through puberty.

Doctors at first thought that the abdominal pain was appendicitis but the symptoms continued even after treatment.

But after a medical check-up last year, doctors finally found the root cause of his symptoms.

Chen was in fact intersex with female X chromosomes and female reproductive organs – and the monthly cycle of blood in his urine and abdominal pain were actually caused by menstruation.

Chen underwent a three-hour surgery on 6 June to remove his ovaries and uterus.

His surgeon, Luo Xiping, told the South China Morning Post that the patient ‘was quickly at ease and his confidence was restored’.

‘From his point on, he can live his life as a man, but he cannot reproduce because his testicles cannot produce sperm,’ the surgeon added.

Intersex is a term which has largely replaced ‘hermaphrodite’ and is used to describe people who ‘do not fit the typical definitions for male or female bodies’, according to United Nations guidelines.

The UN believes between 0.05 and 1.7 per cent of the global population is intersex – about the same percentage that have red hair.

Whilst being intersex is extremely rare, in March last year, a married woman in China who had been trying to get pregnant found out she was a biological man.

The 25-year-old Chinese woman, known only as Pingping, was told she had the male Y chromosome, despite having female genital organs and having lived as a woman all her life.

The discovery emerged following an X-ray on an injured ankle, but also explained why she had never had a period and failed to get pregnant with her husband.

The woman, whose name was given as Pingping, was told she had a condition called a ’46 XY disorder of sexual development’ in which people with male chromosomes have ambiguous, underdeveloped or missing genital organs.

Because the woman had ostensibly female organs, she had never questioned her sex, and had turned a blind eye to the fact she had never menstruated.

When her mother took her to a doctor as a child, she was told that she might simply be developing more slowly than others.

‘After I grew up, I found this issue quite embarrassing so I didn’t treat it seriously,’ she said.

But the doctors who looked at her ankle were struck by her underdeveloped bones and investigated further – bringing forth the surprising result.

Doctors informed her that she had no uterus or ovaries, which explained why her 12-month effort to get pregnant had ended in disappointment.

But she also had no male genitalia or testes, with doctors saying that these might have existed once but ‘degenerated and atrophied’.

The medics said Pingping’s family should have taken her for more thorough checks years ago, adding that her parents were closely related.