Protests were planned for Wednesday against the government’s health pass, which restricts access to an array of services to those who cannot show they have received at least one does of the vaccine, have recently tested negative or recovered. 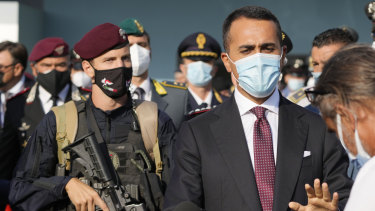 “This is a worrying escalation, a climate of hatred which harms the country but will not stop the vaccination campaign,” Di Maio wrote on Facebook of the threats on Thursday (AEST).

Demonstrators have said they will gather in front of many train stations in Italy and block the railways, to protest the health pass obligation on trains.

“Another infamous person to be executed” and “you must die”, were some of the messages posted on Telegram groups against Di Maio, Italian media reported.

Violence and threats against journalists and health operators have been reported several times in Italy in recent days.

Matteo Bassetti, an infectious disease expert, has said a man has insulted him on the street close to his house and a journalist from newspaper La Repubblica on Monday was attacked by a man while covering a demonstration against the health pass.

“The threats journalists, medical doctors and common citizens have received in the last days cannot be tolerated,” Di Maio said.