An eight-year-old boy lost his life after his drugged-up father’s BMW ‘aquaplaned’ on a flooded road and collided into a lorry, an inquest has heard.

Blake Consterdine-Clarke died in hospital soon after suffering catastrophic injuries in the crash on the M60 near Audenshaw, Greater Manchester, on February 28, 2020.

His father Leon Clarke, 40, who was 13 times the drug-driving limit, had taken cocaine the night before he lost control of his unroadworthy BMW 3 Series, which was travelling at 76mph near junction 23.

Clarke, of Rochdale, who was jailed for four years in October when he pleaded guilty to causing death by careless driving, was seen by emergency services cradling Blake while crying, ‘I’ve killed my son’. 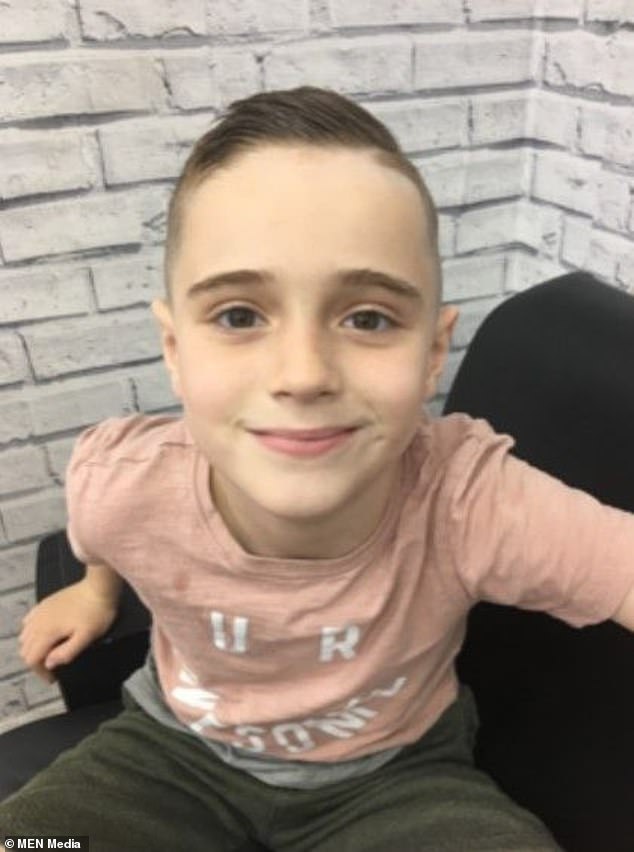 Blake Consterdine-Clarke, eight, died in a crash on the M60 near Audenshaw, Greater Manchester, when his cocaine-addled father’s unroadworthy BMW ‘aquaplaned’ on a flooded road and crashed into a lorry 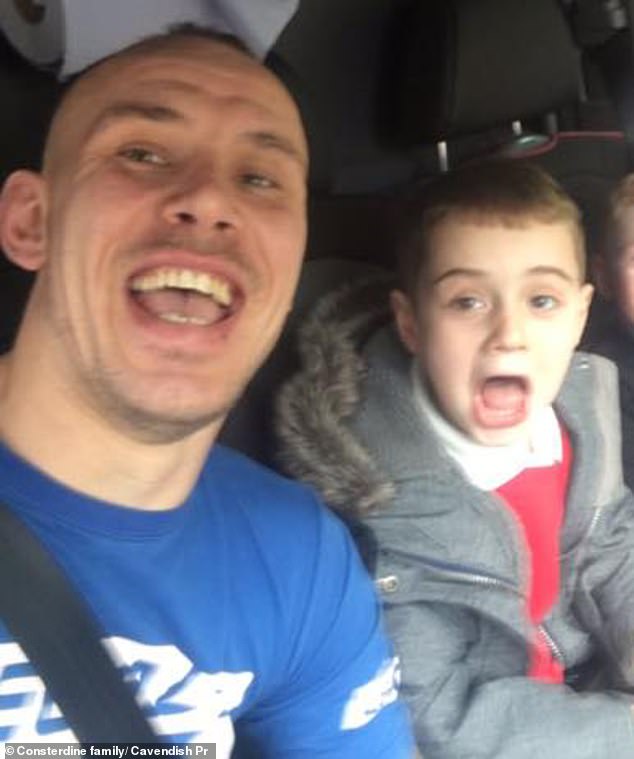 Delivery driver Leon Clarke, 40, was 13 and a half times the drug limit when he crashed his BMW on the M60 in Greater Manchester on February 28, 2020, his killing eight-year-old son Blake (pictured together)

Uninsured Clarke had picked up his two young sons from their grandparents’ home in Middleton at around 1:40pm on the day of the tragedy.

An inquest at Manchester South Coroner’s Court yesterday heard that a blocked drain had resulted in a ‘significant amount of water’ building up on the motorway on the day of the crash.

Another vehicle had also aquaplaned on the same stretch of carriageway earlier that day, the inquest was told.

As Clarke drove along the clockwise M60, Blake was sitting in the back of the BMW while his younger brother, who escaped with minor injuries, was a front seat passenger.

The BMW was ‘poorly maintained’, with both of its rear tyres below the legal limit, the inquest heard.

PC Martin Davies, a forensic collision investigator for Greater Manchester Police (GMP) said it had been raining ‘quite considerably’ prior to the crash.

As Clarke attempted to switch lanes, the inquest heard that he lost control of his vehicle. As the BMW ‘aquaplaned’ on standing water, it began to spin. 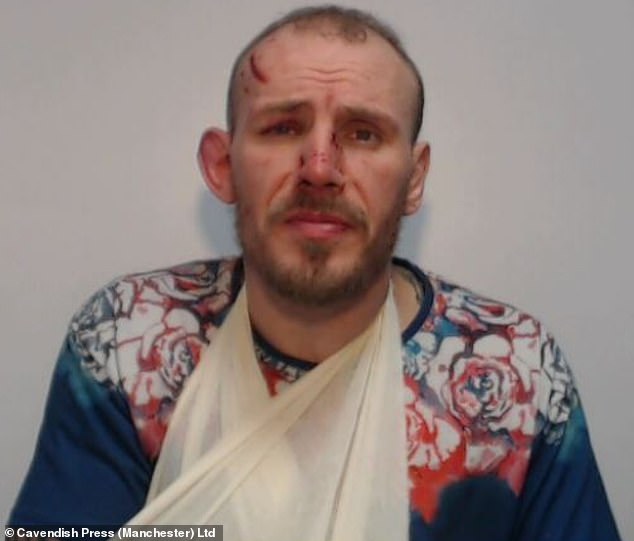 Clarke was seen holding his fatally injured son at the roadside, crying ‘I’ve killed my son’ (Pictured: Clarke was still injured at the time of his arrest)

By this point, PC Davies said it would have ‘practically impossible to correct’. He told the hearing that the BMW’s tyre pressure, tread depth, and the amount of standing water on the road had all contributed to the loss of control.

The tread depth on each of the vehicle’s rear tyres was below the legal limit, PC Davies said. One was ‘effectively bald’, which would have reduced the tyre’s ability to disperse water, he explained.

PC Davies said the amount of water on the carriageway was ‘not typical’ for a motorway. Even a car with adequate tread depth and tyre pressure travelling below the speed limit could have aquaplaned, he told the hearing.

The PC added: ‘Any tyre correctly inflated could have aquaplaned in those circumstances but the tyre pressure certainly made that happen sooner.’

The officer said the fact the BMW was attempting to change lanes had also contributed to its loss of control.

PC Davies added: ‘If it had been going straight ahead, there is a possibility it might not have occurred.’

After veering off the motorway, the BMW ploughed into a highways maintenance lorry parked on the hard shoulder. The truck had been called out to assess damage caused during an incident in which another vehicle aquaplaned earlier that day. 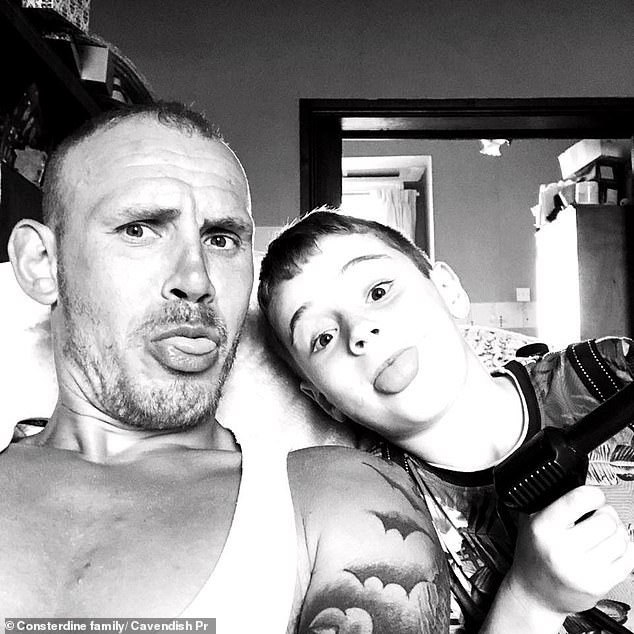 At Minshull Street Crown Court in Manchester in October, Clarke (left) was jailed for four years after he admitted causing death by careless driving while over the drug driving limit (Pictured with his son Blake, who died in the collision)

Firefighters and paramedics performed CPR on Blake, from Milnrow, before he was taken to Royal Manchester Children’s Hospital.

Despite the best efforts of medics, he was pronounced dead that same afternoon. Blake’s brother was also taken to hospital along with a highways worker, who was in the lorry at the time of the crash.

Clifford Orrell, from National Highways, told the inquest a blocked drain had resulted in a high amount of standing water on the carriageway at the time of the crash.

While the drainage system itself was working properly, he explained that debris had collected and caused a blockage. Mr Orrell said an investigation had been unable to establish when the drains were last cleaned before the incident.

Up until 2019, he explained that it was the requirement for motorways drainage systems to be cleaned every two years. This has since been increased to once a year, he added.

In a statement read out in court, Vicky Consterdine – Blake’s mother – described her son as a ‘happy, little boy’ and said her ‘life is over’ following his death.

Sergeant Anna Kennedy, of GMP, told the court that tests showed that Clarke was 13 times over the legal limit for benzoylecgonine – a metabolite of cocaine – at the time of the crash.

She said he was estimated to be travelling at about 76mph when he lost control – despite initially telling police he was driving at 55mph.

Concluding that Blake died as a result of a road traffic accident, senior coroner Alison Mutch described his death as a ‘great tragedy’.

Ms Mutch said: ‘On the day in question, his mum and the rest of the family could have had no idea of the very tragic way that the day was to end.’

The coroner issued a warning to others about the importance of proper tyre maintenance, which she described as ‘fundamental’ to road safety.

Ms Mutch added: ‘What is clear is that all drivers should check their tyre depths carefully to ensure their vehicle can be used, particularly in road conditions such as this.

‘In addition to the tyre treads, the vehicle in question had tyre pressures below the recommendations given by the manufacturer.

‘What the death of Blake shows is that the tyre pressures recommended by the manufacturer are not there just to create inconvenience to owners of motor vehicles, but are there to keep them and their passengers and other road users safe.’

The coroner ruled that the blocked drain had contributed to the crash, and raised concerns about the lack of records documenting when it was last cleaned.

However, she said she was satisfied that National Highways had made ‘significant changes’ to reduce the risk of flooding on its motorways.