Newly minted deputy premier Jacinta Allan and incoming minister Harriet Shing have tested positive to coronavirus just a day after being sworn in to their new roles.

Daniel Andrews, his new cabinet secretary, 19 ministers and their families packed out Government House on Monday for the swearing-in ceremony as part of a pre-election cabinet reshuffle after the government lost five of its most senior ministers, including deputy premier James Merlino, last week. 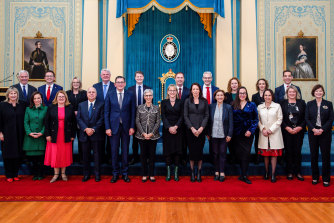 Members of the new-look Victorian ministry pose for a group photo at Government House during the swearing-in ceremony on Monday.Credit:AAP

Sonya Kilkenny, the new minister for corrections, youth justice, victim support, and fishing and boating was unable to attend after being struck down by COVID-19. She was at a press conference in Frankston with the premier, new Health Minister Mary-Anne Thomas and Frankston MP Paul Edbrooke a day earlier.

Former police minister Lisa Neville tested positive to the virus on Saturday, bringing the total number of Labor MPs who have contracted COVID-19 in the past four days to four.

Allan said she woke up on Tuesday with “mild symptoms” and completed a rapid antigen test, which returned a positive result. “Will spend the next week working from home,” she posted on Twitter, just 30 minutes before her first interview as deputy premier on RN Breakfast. 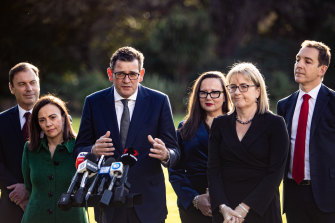 Premier Daniel Andrews speaks to media alongside members of his new-look ministry on Monday, including, immediately to his left, Harriet Shing and Jacinta Allan, who have both now tested positive for COVID-19. Also pictured are Colin Brooks and Lizzie Blandthorn (left of photo) and Steve Dimopoulos (far right of photo). Credit:Scott McNaughton

“I’m hanging in there, although, like so many other Victorians and Australians, the dreaded two lines came up, not just for me but my two kids this morning. So, a good way to start the school holidays in our household,” Allan told RN Breakfast.

Shing, now the minister for water, regional development and equality, said: “Not quite the start I was hoping for. Rest and working from home it is.”

The Victorian parliament sat last week for the final time before its five-week winter break.

Labor MPs were also in and out of formal and informal caucus meetings to choose their five new ministers and elect a deputy after the government was forced into a major reshuffle of its cabinet – and the senior leadership team – just five months out from the election.

Merlino, Martin Foley, Martin Pakula, Richard Wynne, and Neville, the government’s five most experienced ministers, each announced they would not recontest the November election and would step down from cabinet immediately.