Dani Laidley has received a confidential financial settlement from Victoria Police almost two years after images of the former AFL player and coach wearing a wig and make-up were leaked by officers and published on social media.

A notice of discontinuance was filed in the Supreme Court last week, after Ms Laidley launched a negligence claim against Victoria Police in May 2021 alleging the force and its officers had breached the duty of care owed to her while in custody. 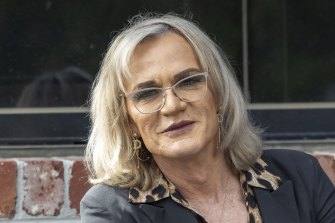 Dani Laidley will receive a payout from Victoria Police.Credit:Wayne Taylor

The amount of the settlement is unknown.

Ms Laidley and her lawyer Jeremy King both refused to comment, and a Victoria Police spokeswoman also refused to discuss the payout, but released a statement to The Age on Tuesday.

“By agreement of both parties to the litigation, the terms of settlement are confidential. As per standard process, any discipline proceedings relevant to the members charged criminally will follow the conclusion of those criminal matters,” the police spokeswoman said.

Ms Laidley and her legal team had not nominated a specific amount of compensation they were seeking, but made a claim for aggravated and exemplary damages, according to a Supreme Court writ.

“Those officers intended, or knew, or ought to have known, that the natural and probable result would be the republication of the first and second photographs and the words in the press, on radio and television, and on the internet. [Ms Laidley] has been injured in her feelings, credit and reputation [and] has been brought into public ridicule and contempt and has suffered, and continues to suffer, loss and damage,” court documents stated.

However, a magistrate recently dismissed the case against Detective Leading Senior Constable Murray Gentner over his role in sharing a photograph of the 54-year-old former North Melbourne player and coach.

Magistrate Samantha Poulter dismissed all charges against Leading Senior Detective Gentner on a legal technicality, finding the prosecution had failed to establish that the officer had a duty to not disclose the information about Ms Laidley.

“I am satisfied … the disclosure did not impede crime prevention, detection, pursuit of offenders or the like. On that basis, I find that the prosecution has not established a legal duty existed not to disclose the information in those circumstances,” Ms Poulter said on May 8.

All three officers face internal disciplinary action, which could include demotion or dismissal, once their cases are finalised.

In total, 39 police officers faced internal disciplinary action – with at least six being ordered to pay up to $3000 compensation to Ms Laidley, following a seven-month investigation by Professional Standards Command into the circulation of the images.