Desperate Ukrainians hit by a lack of food have had their water cut off by Russian shelling too.

Last week officials in Luhansk said Russian forces had deliberately targeted the supply of food to the eastern region.

They swamped the key city of Sievierodonetsk with missiles that wiped out all food depots, as well as markets and shops. 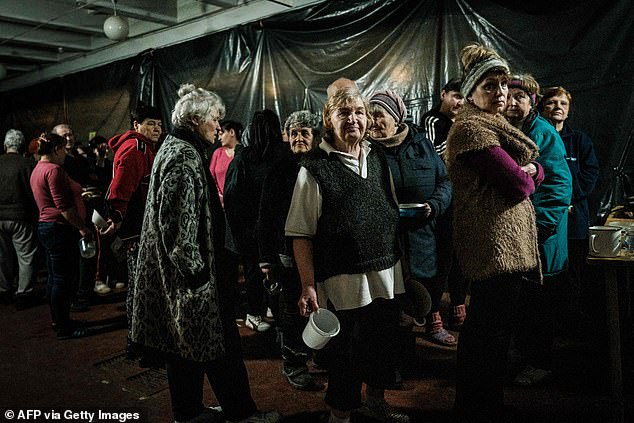 Hungry: Citizens of Sievierodonetsk queue in a factory bunker for food and water

‘If we lost the ability to get water to those who are staying behind in the cities, people will start to die of dehydration. All of Russia’s actions are war crimes. They amount to a genocide of the Ukrainian people.’

The governor added: ‘On the battlefield, they showed themselves mediocre. The only tactic is to destroy everything around them in order to move forward.’

Luhansk authorities said yesterday there had been 7,500 power outages in the previous 24 hours and that ‘almost the entire region’ was without water. 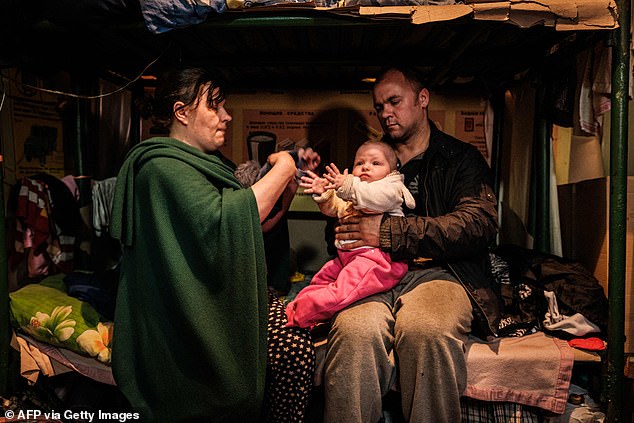 Internally displaced parents take care of their seven-month old girl in a bunker at a factory in Severodonetsk, eastern Ukraine 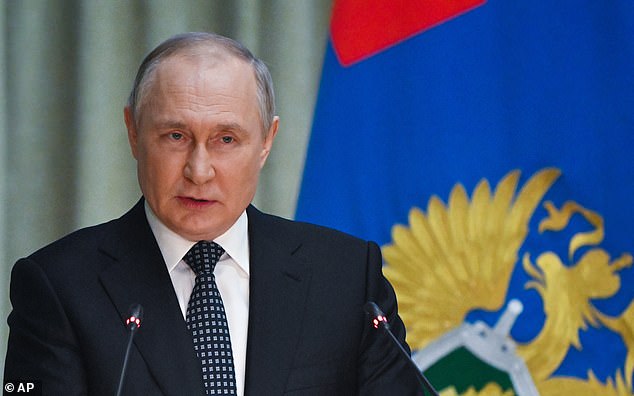 Russia has repeatedly denied it attacks civilian infrastructure, claiming all strikes carried out by its army are aimed at military targets. Pictured: Vladimir Putin

Russia has repeatedly denied it attacks civilian infrastructure, claiming all strikes carried out by its army are aimed at military targets.

It said Russian attacks in besieged areas of the country also meant at least another 4.6million people now had ‘limited access’ to water supplies.

The Daily Mail visited the embattled southern city of Mykolaiv last week and found that locals had been forced to collect rainwater to wash themselves.

Viacheslav Shevel, a 40-year-old entrepreneur, said the Russians had ‘destroyed water supplies’ by blowing up the plant in nearby Kherson.

‘Those who live by the river are collecting water to use the toilet,’ he said.

‘Fortunately, volunteers are bringing as much as they can from Odessa.’

Targeting food and water supplies would be illegal under international law as well as the Geneva Convention, the treaty governing armed conflict worldwide.

Together with the Ukrainian embassy in London, Mail Force is sending 500,000 boxes of humanitarian food aid worth £8million to the war-torn country.

Readers of Mail Newspapers and MailOnline have always shown immense generosity at times of crisis.

Calling upon that human spirit, we are now launching an appeal to raise money for refugees from Ukraine.

For, surely, no one can fail to be moved by the heartbreaking images and stories of families – mostly women, children, the infirm and elderly – fleeing from Russia’s invading armed forces.

As this tally of misery increases over the coming days and months, these innocent victims of a tyrant will require accommodation, schools and medical support.

All donations to the Mail Ukraine Appeal will be distributed to charities and aid organisations providing such essential services.

In the name of charity and compassion, we urge all our readers to give swiftly and generously.

TO MAKE A DONATION ONLINE

To add Gift Aid to a donation – even one already made – complete an online form found here: mymail.co.uk/ukraine

Via bank transfer, please use these details:

TO MAKE A DONATION VIA CHEQUE

TO MAKE A DONATION FROM THE US

You can donate via CAF America at: https://donations.cafamerica.org/mail-force/

US readers can donate to the appeal via a bank transfer to Associated Newspapers or by sending checks to dailymail.com HQ at 51 Astor Place (9th floor), New York, NY 10003.

Checks in the US need to be made out to ‘CAF America’ and have ‘Mail Force Ukraine Appeal’ in the memo.