The trapped driver of a car that sped ‘at 90mph’ into a sheltered housing block and burst into flames screamed ‘get me out of here!’ before the vehicle exploded and left three people dead, witnesses say.

Shocked residents in in Westbourne Park, west London watched in horror as people tried in vain to rescue a screaming man trapped inside the wreckage of the burning vehicle before it exploded at around 4.50am yesterday.

Nine people from the retirement home had been rescued by firefighters after the collision at the junction of Great Western Road and Woodfield Road.

Local residents told how they tried to assist those trapped inside, but were forced to stand back as the car ‘exploded’ in flames. They said firefighters battled the blaze for roughly 20 minutes as it kept reigniting.

One horrified witness, who lives across the road and did not wish to be named, told MailOnline that a man was seen trying to pull victims to safety amid cries of ‘Get me out!’ before their car was engulfed in flames.

‘I heard a big smash and knew it was a car crash, but not how bad it was,’ he said. ‘I came out to see what had happened and two guys were trying to get their friend out of the car, but it was being engulfed in flames.

‘They had the door open and the man was screaming ”Get me out of here!” But they couldn’t get him out and ran away. The next minute the car exploded in a fireball – there’s not really anything anyone could have done.’

A Metropolitan Police officer at the scene said the driver had come north over a canal bridge before losing control of the vehicle, which witnesses said could be a Seat Leon. 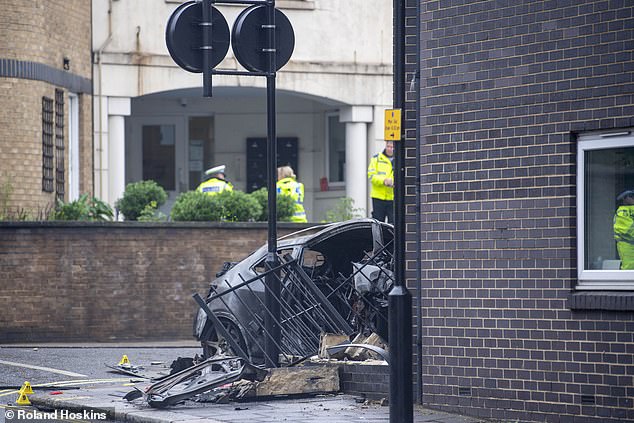 Local residents told how they tried to assist those trapped inside, but were forced to stand back as the car ‘exploded’ in flames. They said firefighters battled the blaze for roughly 20 minutes as it kept reigniting 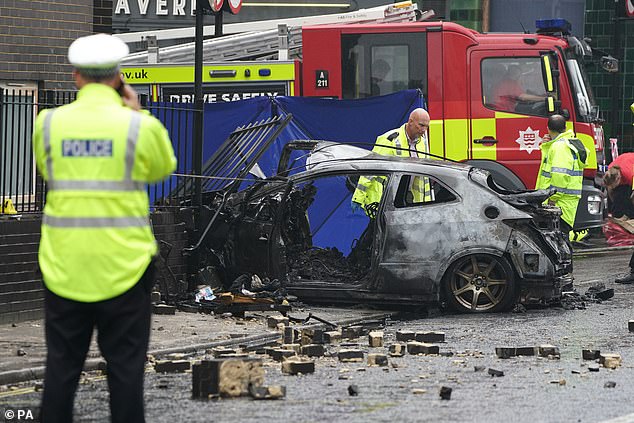 The burnt out shell of a car at the scene on the Great Western Road, Notting Hill, west London, where three people have died after the vehicle collided with a residential block 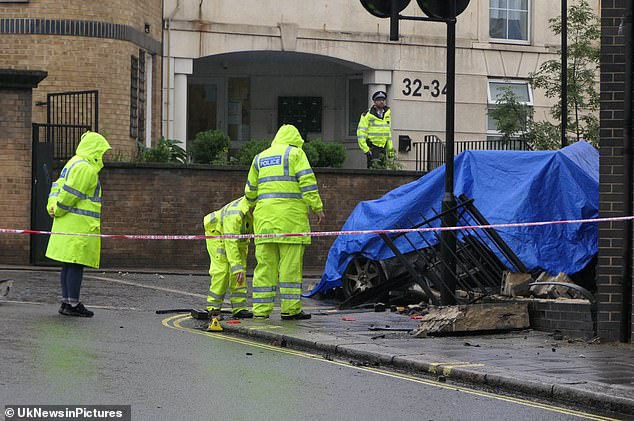 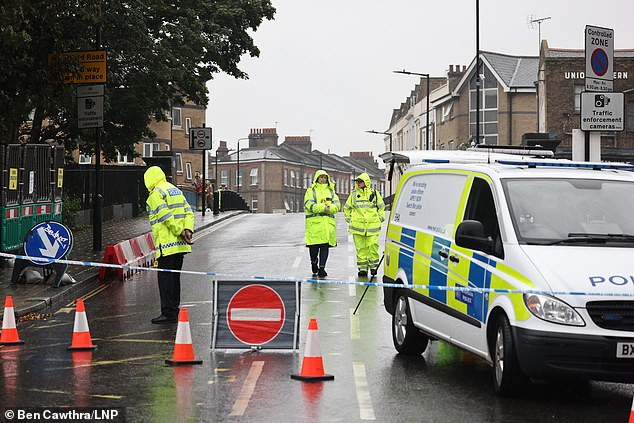 Emergency services at the scene at Great Western Road in Westminster 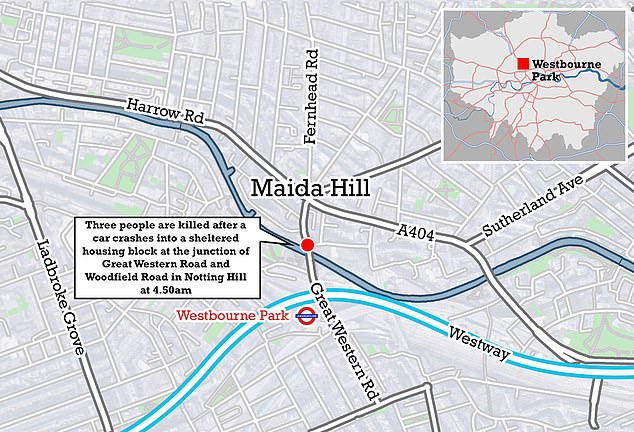 Nine people from the retirement home were rescued by firefighters following the horror crash in Great Western Road at 4.50am

The huge impact sent bricks flying across the road and onto neighbouring houses before the car burst into ‘yellow flames’.

Brian Waldy, 70, a retired chartered surveyor who lives in a basement flat in the building next door, said: ‘I heard this big crash and at least 10 full sized bricks fell down onto the stairs outside.

‘I put my dressing gown on and came out and saw the bright yellow flames enveloping the car – about a metre high.

‘There was a man a couple of metres away shouting into the car something about the seatbelt buckle. But then someone else shouted ”move away, bro, it’s going to blow”, so the guy moved back and got out of the way.

‘Then there were at least two explosions and so, to be safe, I went back to my front door.’

A woman who lives a few doors down said: ‘I was woken up by a super-loud noise. By the time I had got dressed and come outside the emergency services had arrived.

‘They we’re just working on putting the fire out with their hose.

‘This went on for maybe 20 minutes; it would go out, but then ignite again. I would say it was a dark car with what looked like some sort of design on it. It’s really shocking and I’m sorry for the people who lost their lives.’ 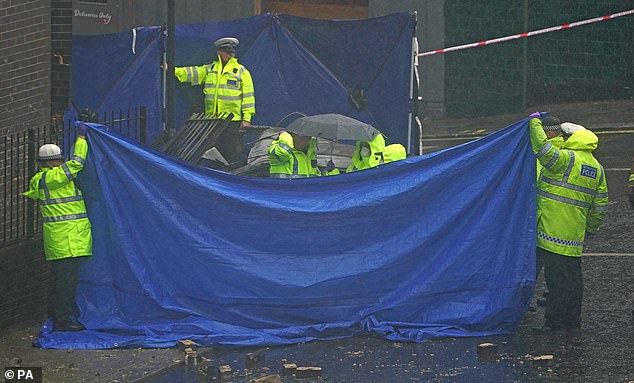 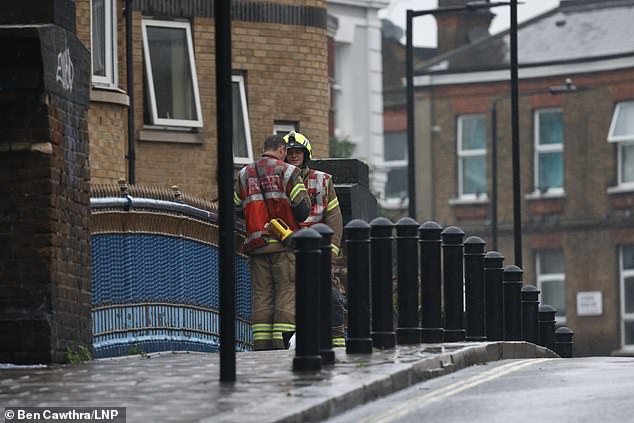 A number of residents were evacuated from the building as a precaution. A scene remains in place and enquiries are ongoing

A man called Evan, who lives 100 yards down the road, said: ‘I’d woken up to go to the toilet and heard a big bang which sounded like someone slamming down a big metal bin – it was just one big, sharp snap.

‘I don’t think it was actually raining at 4.45am, although it started when the Fire Brigade arrived.

‘I saw the blue lights passing, but I didn’t know where they were going to, just that it was close by.

‘Then I woke this morning and saw on the news that three people had died.’

Maggie Bernardele, 33, from Argentina who lives a few doors down from the crash scene, said: ‘I flew back from Italy yesterday and got home around 1am.

‘My first thought when I woke up was that it was a garbage truck or something like that. But I would never have thought it was a car colliding into a building 50 metres away from our building.

‘It’s usually a really busy road, but this morning when we woke up it was silent.’

One witness who lives on the road told LBC they saw a neighbour run out to try to help the people in the burning car.

They said: ‘It’s a shock – you don’t expect something like that to happen. There’s no words. It’ll stay with us for a while.’

Another said: ‘There were flames shooting up from the car. There were people on the street and all the traffic stopped. It was like something out of a movie. My kids were crying. It was horrific.’ 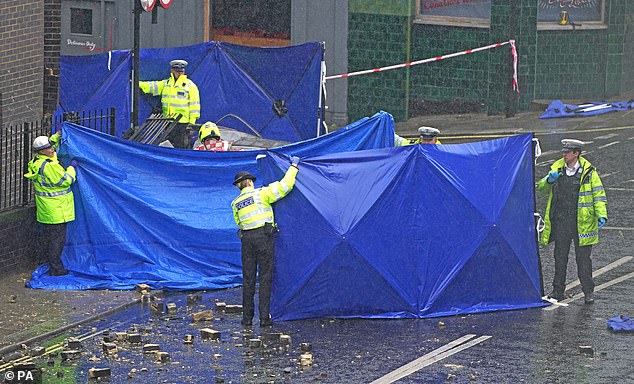 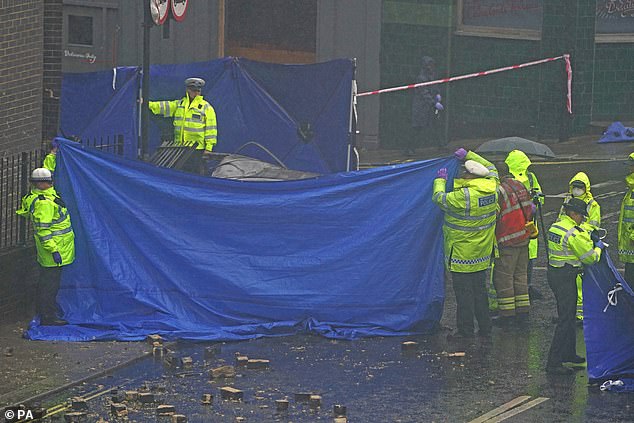 Manuel Gaspar, manager of the Transparent World cleaning company, based opposite the crash, told the Standard: ‘The impact was awful. There was debris spread all over the road.

‘We saw a neighbour who was very brave. He had just woken up and didn’t have a shirt on and was trying to get into the passenger door. All the other doors were stuck or too damaged.

‘The smoke was going into the old people’s home and then the fire started in the back of the car.’

A nearby coffee shop owner said some of the first witnesses on the scene of the Great Western Road crash were visibly shaken when they came to a get a drink from him on Tuesday morning.

Goao Santos, who runs the BICA coffee shop in Westbourne Park station, opened up at around 6am.

He said: ‘The guy cleaning the street, the cleaner, he came to get an espresso. They said it’s a really bad car crash.

‘They went there, they said the car was on fire, they tried to rescue but could they could not rescue.’

Mr Santos added that someone in the man’s group then called the police.

‘He couldn’t even tell how many people there were inside of the car. The blaze was probably so intense. He was a bit shaken, you know,’ he said.

Detectives from the Serious Collision Investigation Unit are appealing for witnesses and those with dash cam footage to come forward following the incident.

Anyone who saw the car before the incident, or who has information, video or images that could help police, is urged to call 101 ref CAD 917/14 Sept.