Climate change activists have created traffic chaos in Port Botany for the second consecutive day after a man suspended himself from a pole on Sirius road on Wednesday morning.

The protest follows a 23-year-old man being charged by police on Tuesday after blocking off a busy intersection in the area by also climbing a pole.

In a statement, protest organisers Blockade Australia said they will block off the bridge for “as long as they can”.

“The science is clear that the window is closing for action on climate,” the statement reads.

In a live video filmed on Wednesday morning at the scene, a 21-year-old man who identified himself as Arno said he was participating in the demonstration as “voting doesn’t work” to create change.

“This is Blockade Australia shutting down one of the largest container ports on the continent, and apparently it only takes one person to shut down a huge proportion of it,” he said in the live stream. 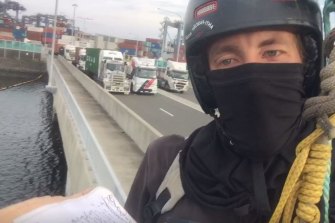 Protesters have caused major delays in the area for a second day in a row.Credit:Blockade Australia

“I’m doing this because we’ve seen over many decades that voting doesn’t work. It was never supposed to work, the system is stacked against us.

“The climate crisis is already here. It’s time to stand in solitary with those who suffer the most.”

Below the protest hangs a banner which reads: “No Borders, No Nations, Stop Australia’s Operation.”

In a statement, NSW Police said the demonstration was unauthorised.

“Sirius Street is currently closed in both directions. Significant traffic delays are being experienced, and traffic diversions are in place around the airport and ports,” the statement said.

“All other motorists should avoid the area or allow extra travel time.”

The activist organisation said they have chosen Port Botany as a place to protest as it “began a 250-year campaign of genocide against the First Nations People on this continent”.

“The Port operates on the unceded lands of the Bidjigal people, who have been resisting the Australian colony since European arrival and subsequent invasion on the shores of Botany bay over 250 years ago,” the wrote in a statement.

“To do this will not only inconvenience a workforce that doesn’t deserve it but will inhibit our economic recovery,” he said on radio station 2GB.

“I can’t imagine a fellow Australian being so self-centred.”

Mr Elliott also said he would be making enquiries about whether 24-hour security was required in the area to stop the protests from occurring.