Tesla founder Elon Musk has challenged Russian President Vladimir Putin to a fight over Ukraine in an early morning Twitter dump that included memes about the invasion and references to Macbeth.

The apparent challenge was part of a flurry of tweets Musk, 50, sent out over the course of three hours, including the line, ‘By the pricking of my thumbs …,’ which is followed by the phrase, ‘Something wicked this way comes,’ in Shakespeare’s Macbeth.

In another tweet, he posted a meme of a character from the Netflix show Narcos sitting on a porch swing that reads, ‘Netflix waiting for the war to end to make a movie about a black ukraine guy falls in love with a transgender russian soldier.’

The South African billionaire has been providing Ukraine with internet through his Starlink satellite service at the request of Ukrainian officials.

While it’s unclear what inspired Monday’s posts, rapper Azealia Banks has previously accused Musk of tweeting under the influence of the psychedelic drug LSD, which he denied. 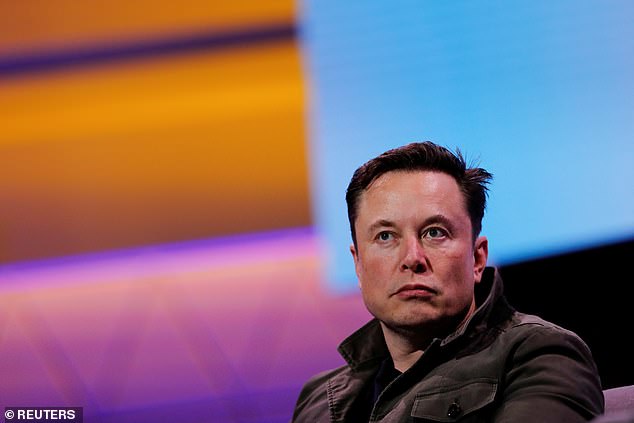 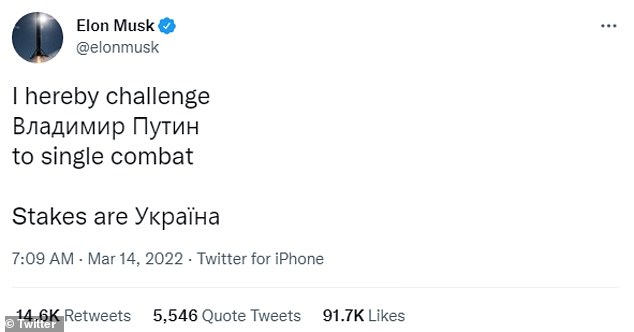 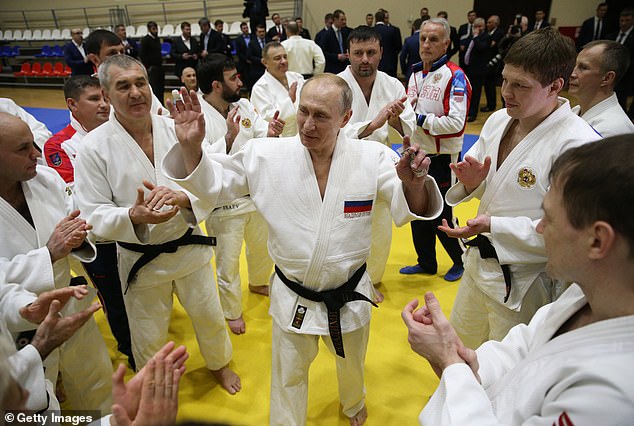 It is unclear what inspired the South African billionaire’s message on Monday. Above, Russian President Vladimir Putin with the national judo team during training in Sochi, Russia in 2019 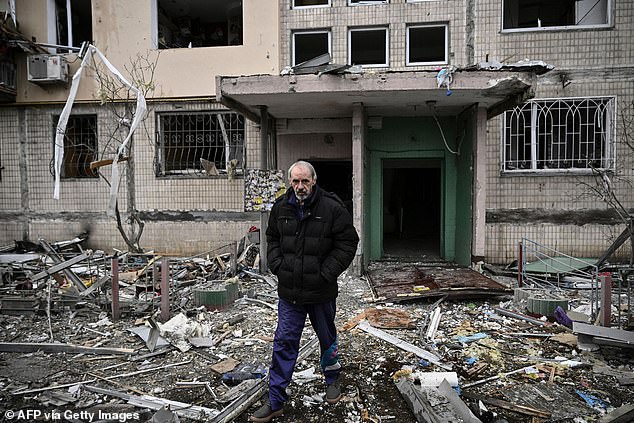 Ukraine continues to face bombardments from Russia in its ongoing invasion. Above, a man walk away from a destroyed apartment block after shelling in Kyiv on Monday

Musk capped off his challenge with a direct reference to the Kremlin.

Earlier on Monday, he posted the cryptic message, ‘There is a beauty to the biological substrate.’

Musk, worth a reported $218.9 billion, mocked Russian officials earlier this month as the US escalates sanctions against the country in retaliation for its invasion of Ukraine.

‘In a situation like this we can’t supply the United States with our world’s best rocket engines. Let them fly on something else, their broomsticks, I don’t know what,’ Dmitry Rogozin, the head of Russia’s space agency, said on state Russian television on March 3.

That same day, Musk tweeted a link to a successful SpaceX launch followed by the words, ‘American Broomstick,’ along with American flag emojis. 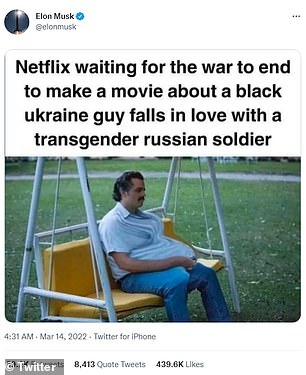 The apparent challenge was part of a flurry of tweets Musk, 50, sent out over the course of three hours

Late last month, the entrepreneur answered a plea from the vice prime minister of Ukraine, who asked the tycoon to help the embattled nation with satellite internet access.

‘@elonmusk, while you try to colonize Mars — Russia try to occupy Ukraine! While your rockets successfully land from space — Russian rockets attack Ukrainian civil people! We ask you to provide Ukraine with Starlink stations and to address sane Russians to stand,’ the vice PM Mykhailo Fedorov wrote in a tweet.

His plea came as part of Ukraine finds itself without any internet connection following three days of rocket attacks by Russia.

Officials there are keen that locals remain connected so their stories can be used to combat Russian propaganda – and so that they can share atrocities being carried out by Russian troops on behalf of Vladimir Putin.

That same day, Musk answered the call and said that he would be sending Starlink receivers to the country.

Starlink is a space-based system that SpaceX has been building for years to bring internet access to underserved areas of the world. 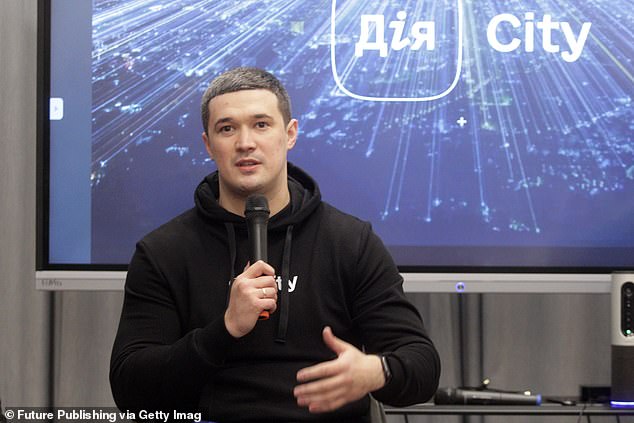 Less than 11 hours later, Musk answered the call and revealed more terminals were on route

The president of the embattled country took to Twitter to thank Musk for the support and invited the tech mogul to visit Ukraine once the war is over.

‘Talked to @elonmusk. I’m grateful to him for supporting Ukraine with words and deeds. Next week we will receive another batch of Starlink systems for destroyed cities,’ Zelensky wrote on the social media platform.

Musk, who said he ‘looks forward to visiting Ukraine’ when the war ends, sent a collection of antennas to Ukraine earlier this month after Prime minister Denys Shmyhal voiced concerns that Ukrainians could lose internet access if Russia continues to attack communications towers, as it did with the bombing of a Kyiv TV tower.

In 2018, Musk admitted that he did see Azealia Banks after denying the rapper’s claims that she spent a bizarre weekend at his LA home watching him have a meltdown over his ‘drug-induced’ tweets.

The Tesla CEO admitted to the New York Times that he came across the rapper early in the morning after working out. 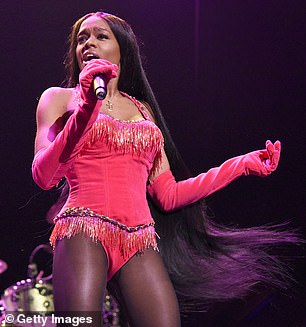 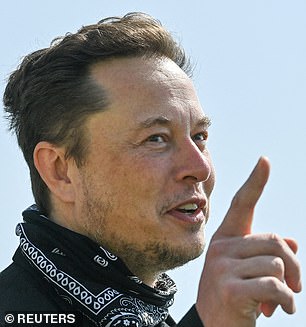 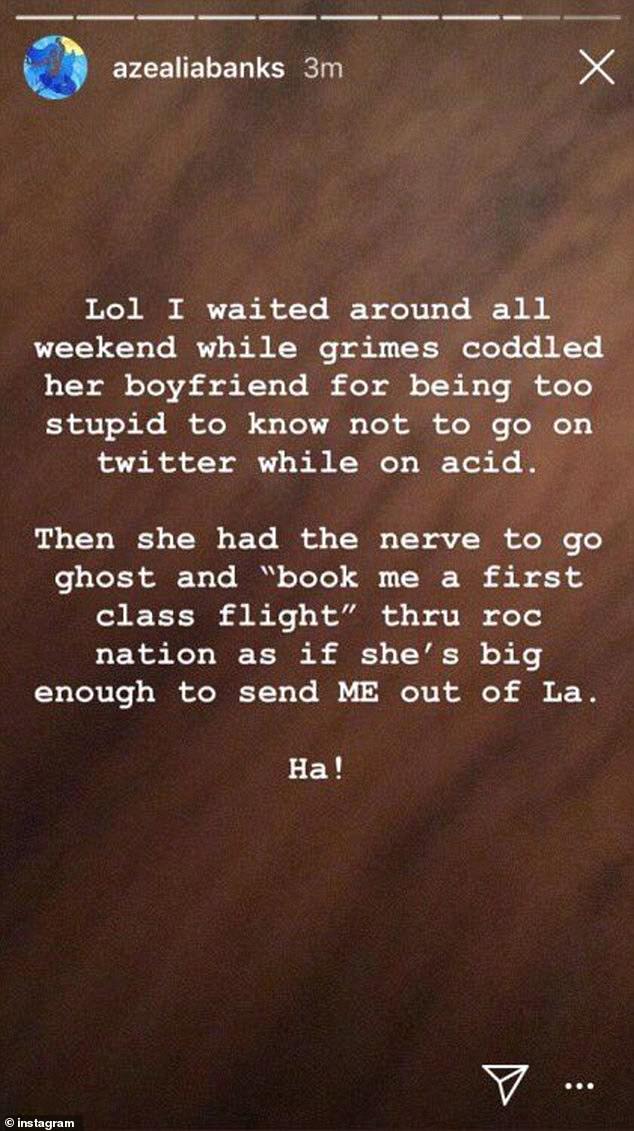 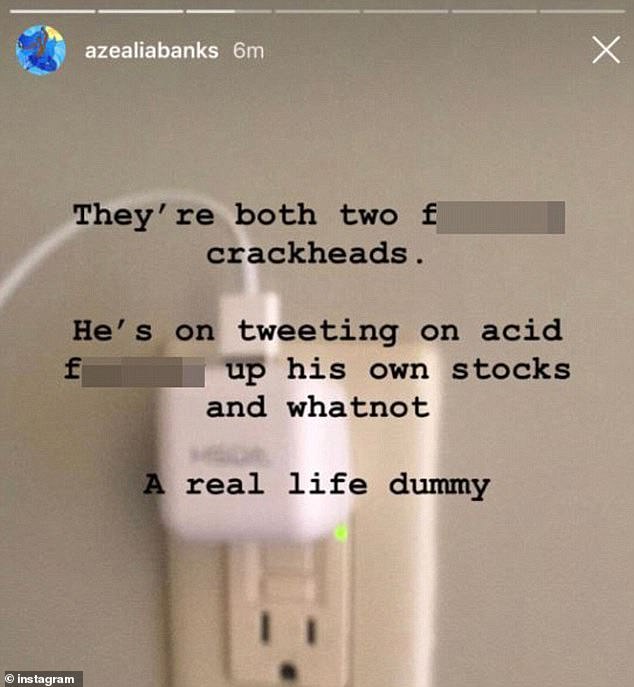 He insisted it is the ‘only time he’s ever laid eyes on her’.

Musk initially said he had never met Banks after she said she saw him freaking out about his tweet claiming he’d already secured funding to take his firm private.

‘I saw him in the kitchen tucking his tail in between his legs scrounging for investors to cover his ass after that tweet,’ Banks said of Musk last weekend. ‘He was stressed and red in the face. I waited around all weekend while Grimes coddled her boyfriend for being too stupid to know not to go on Twitter while on acid.’

Banks had apparently been invited to Musk’s home by his girlfriend Grimes, who was planning to collaborate with Banks on a song.

A rep for Musk’s dismissed Banks’ claims as ‘absolute nonsense’ and denied that Musk had ever met the rapper.

‘Elon has never even met Ms. Banks or communicated with her in any way,’ they told the Business Insider.

Fears grow for American astronaut who could be stranded in SPACE by the Russians: Moscow now threatens to leave father-of-two, 55, in orbit because of US support for war-torn Ukraine

The family of a US astronaut who faces being stranded in space by the Russians last night warned: ‘Our son does not scare easily.’

Nasa’s Mark Vande Hei is due to return from the International Space Station (ISS) with two Russian cosmonauts aboard a Russian Soyuz spacecraft on March 30.

But Dmitry Rogozin, head of the Russian space agency Roscosmos, has threatened to leave the 55-year-old father-of-two in space – or even send the space station crashing back down to Earth – in retaliation for the US supporting Ukraine against the Russian invasion.

Last night Mr Vande Hei’s mother Mary, 77, told The Mail on Sunday: ‘It’s a terrible threat. When I first heard it I did a lot of crying. It’s very troubling. We are just doing a lot of praying.’ 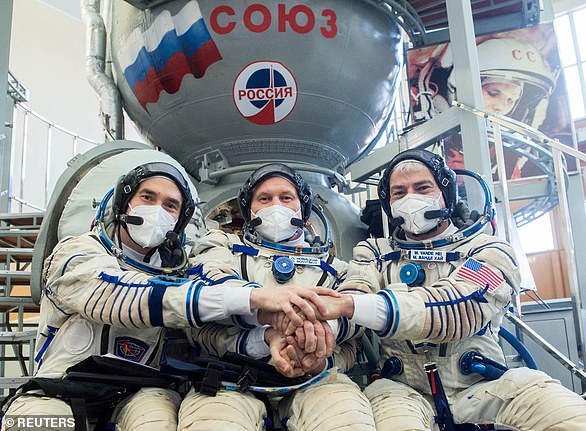 Her son is due to return to Russia-supporting Kazakhstan after 355 days in orbit – the longest time a Western astronaut has spent in space – but Rogozin, an ally of Russian president Vladimir Putin, posted a video on Twitter that threatened to leave Mr Vande Hei in space and detach Russia’s segment of the ISS, which would send it spiralling down to Earth.

It came in response to US President Joe Biden announcing sanctions against Russia which would ‘degrade their aerospace industry, including their space programme’.

Rogozin said: ‘Do you want to destroy our co-operation on the ISS? If you block co-operation with us, who will save the ISS from an uncontrolled de-orbit and fall into the United States or Europe?’

In an exchange with retired US astronaut Scott Kelly, Rogozin repeated his threat, writing: ‘Get off, you moron! Otherwise, the death of the ISS will be on your conscience.’

In fresh threats last night, Rogozin claimed that ‘illegal’ sanctions could cause the 500-ton ISS to crash down over Western countries.

He said: ‘The populations of other countries, especially those led by the ‘dogs of war’, should think about the price of the sanctions against Roscosmos.’ 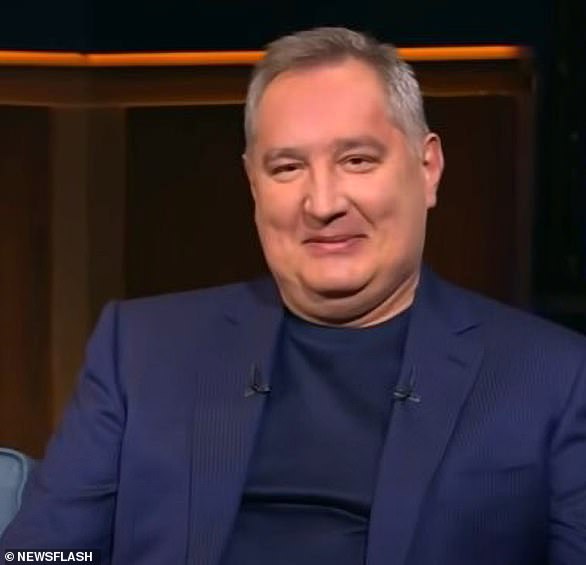 In fresh threats last night, Rogozin (pictured) claimed that ‘illegal’ sanctions could cause the 500-ton ISS to crash down over Western countries

Mrs Vande Hei, a retired teacher from Minneapolis, Minnesota, pleaded for calm, adding: ‘It is really a shame that it’s been politicised like this. It’s quite a shock. His wife, Julie, is very worried in Texas. It’s very hard for her right now.’

Recalling how she and her husband Tom had joined their son in Kazakhstan in 2017 when he was launched to the ISS for his first six-month tour of duty in space, Mrs Vande Hei said: ‘It was wonderful to see people from all different countries work together. Mark has great relationships with all the astronauts and cosmonauts.’

Mr Vande Hei, 80, a retired information systems executive, added: ‘These threats are just one person speaking and, though it’s the head of the Russian space agency, all the other people within the space agency seem very co-operative. Our son does not scare easily.’

Elon Musk has offered to send his SpaceX rocket to rescue the US astronaut if the Russians abandon him. Nasa said it was confident Mr Vande Hei will return as planned.