A FAMILY was left horrified to discover a den of snakes had been living in their ceiling after collapsed due to months of leaking.

The home in Lafayette, Georgia, which is also infested by rats and cockroaches, has had a leaky roof for months according to Harry Pugliese. 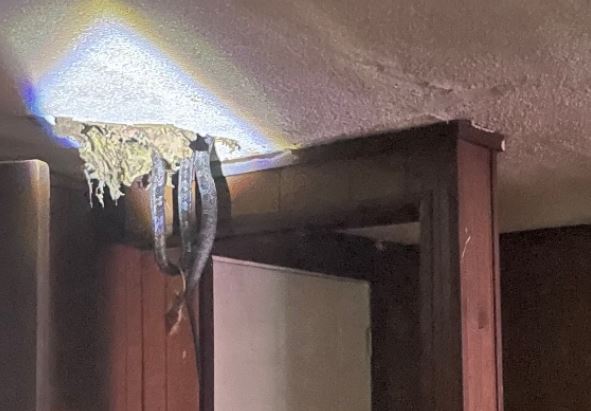 Mr Pugliese who moved in with his wife Susan and his 13-year-old stepdaughter in February, claims he has informed the landlord John Stafford about the problem on many occasions.

However, he says Mr Stafford "didn’t want to do nothing about it," while Animal Control told him they’d need the landlord's permission in order to take the roof down and remove the snakes.

Meanwhile, the family then received an eviction notice yesterday, giving them just a week to move out.

Mr Stafford denies that the family ever informed him of any pests issues, according to WTVC.

He also told the outlet that he sent someone to fix the roof two months ago.

Mr Pugliese says that the work did not solve the problem and claims he called the landlord "20, 30, 40 times" to tell him about the leak. 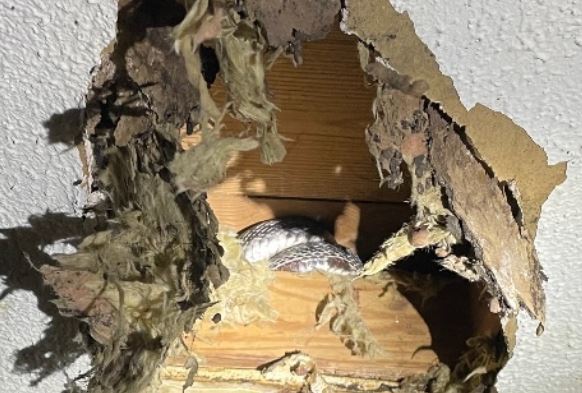 Eventually, he was forced to hire a roofer himself and told the landlord he would not pay rent until all the issues were resolved.

He said: "I was trying to be nice and help him out, and he backstabbed me."

The landlord admitted he had sent the family an eviction notice after they failed to pay two months rent as he said it cannot be withheld due to maintenance issues.

The Pugliese family say they want to leave the infested home as they can no longer sleep.

Mr Pugliese said: "I’m dreaming that a snake is going to fall on me. I can’t sleep. I couldn’t sleep last night because of the snakes."

Before they moved in, Hary Pugliese says they were told rats infested the house and advised to take care of the matter themselves by putting out traps and poison.

"He acts like he doesn't care," said Susan Pugliese, referring to Stafford, "He said 'Well, if there are snakes in the ceiling, they'll be taking care of the rats.'"

When asked by WTVC if he knew about the rats, Stafford said he had "never heard that."

He said he manages a number of rentals and "it's just a difficult situation."

When asked about the bees, he said he "would hate to disturb the bees, because it’s getting hard to even raise bees. Bees are becoming extinct and that is a strong hive."

When he was finally asked about the home's last inspection he hung up on the outlet's reporter.