A gift of valuable irrigation water made exclusively to farmers by the Victorian government ignored the claims of traditional owners and has sparked calls for an urgent review. 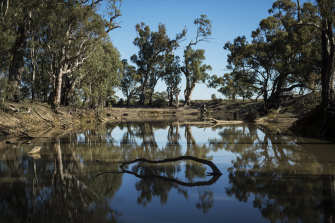 Traditional owners have criticised the Victorian government’s decision to grant 2 gigalitres of water to Goulburn Murray farmers and called for an urgent review. Credit:Nick Moir

“This secretive decision brings us right back to the bad old days of policy driven by vested interests. We demand a review of this decision to ensure full transparency and consistency with the Victorian government’s commitments,” Mr Rigney said.

The government granted farmers the water rights, worth an estimated $10 million, following the completion of irrigation works and the discovery of unallocated water in the tightly held Goulburn Murray district of the Murray Darling Basin.

The Victorian government launched the complicated and controversial Connections Project in 2007 to upgrade water-carrying infrastructure in the Goulburn Murray irrigation district.

Stage one was run by the Victorian government and aimed to prevent the loss of some 225 gigalitres worth of water a year, with the savings to be shared evenly by way of up to 75 gigalitres of annual allocations to urban water supply in Melbourne, the environment, and irrigators.

Stage two was funded by the federal government to further upgrade infrastructure and recover about 200 gigalitres to be managed by the Commonwealth Environment Water Holder.

Victoria’s acting Water Minister Richard Wynne announced last month that stage one of the Connections Project water savings had exceeded expectations by 2 gigalitres and the windfall gain would be distributed to irrigators who already own water rights in the Goulburn Murray Irrigation District.

“The savings mean that Victoria has exceeded its water saving targets by two gigalitres, which will be distributed to irrigators on top of the 75 gigalitres already committed,” Mr Wynne said in April.

This masthead sent questions to Mr Wynne’s office about why First Nations groups were not consulted over the irrigation allocation and why they were excluded from access to it but the minister did not answer.

A spokesperson for said “we recognise traditional owners connection to water”.

“We will continue to work closely with Aboriginal groups to ensure their voices are heard in relation to access to water in Victoria as well as in the Murray Darling Basin Plan,” the spokesperson said.

The government’s Aboriginal Self-Determination Reform Strategy 2020-2025 committed the government to “recognise and implement the decisions that traditional owners determine over sustainable management of water resources” and pledged to “increase the number of projects and initiatives where Aboriginal people are accessing water”.

“We need water to sustain our country and culture and enrich our communities,” said Mr Rigney, who is a Ngarrindjeri delegate to the Murray Lower Darling Rivers Indigenous Nations.

“We’ve consistently been told that there is no water available in Northern Victoria to support cultural flows. Yet, it appears the government has now found 2 billion litres of water and gifted that directly to irrigators without any consultation with First Nations.”

First Nations groups say they were dispossessed of their traditional rights since colonisation and the creation of markets that allocate access to shares in the water resource.

Across the Murray-Darling Basin, 44 First Nations groups share just 0.12 per cent of the water market. Their 64 entitlements give them rights to a cumulative annual water take of 13 gigalitres, worth just $15 million, while the total market is valued at $16 billion

Melbourne University water law and policy expert Erin O’Donnell said the government’s allocation to irrigators was “breathtaking in its apparent hypocrisy” that went against the commitments of the self-determination reform policy and called for an urgent review of the decision.

Dr O’Donnell said First Nations people have been advocating for their rights to water access for decades and “have been consistently told there is not water to spare”.

“This water was unallocated and traditional owners should have been front of mind for the minister.”