Washington: US President Joe Biden has vigorously defended his decision to withdraw all American troops from Afghanistan despite fears the departure will lead to a surge of violence and a possible Taliban takeover of the country.

Biden announced at a White House briefing that the US military mission in Afghanistan will officially conclude on August 31, slightly earlier than his previous deadline of September 11. 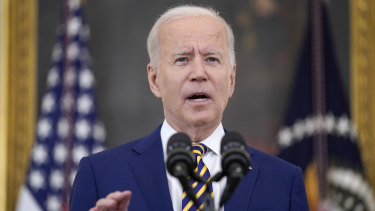 US President Joe Biden was adamant that American troops could not remain in Afghanistan indefinitely. Credit:AP

Taliban forces in Afghanistan have been gaining ground rapidly in recent weeks, leading critics to say the Biden administration is rushing its withdrawal and risking a humanitarian disaster – especially for Afghan women and girls.

Biden, who was animated and at times fiery during the press conference, said that American troops could not remain in Afghanistan indefinitely.

“I will not send another generation of Americans to war in Afghanistan with no reasonable expectation of achieving a different outcome.”

Adding that he had long been a sceptic of America’s prolonged presence in Afghanistan, Biden said: “This is the right decision and, quite frankly, overdue.”

Biden said that the US had achieved its two primary goals in Afghanistan: to kill September 11 mastermind Osama Bin Laden and to remove Al Qaeda’s capacity to use the country as a base to launch attacks on America.

He stressed that America had not gone into Afghanistan to “nation-build” or to turn the country into a functioning democracy.

“No nation has ever unified Afghanistan,” Biden said. “Empires have gone there and not done it.”

He continued: “It’s up to the people of Afghanistan to decide on what government they want, not us to impose the government on them.” 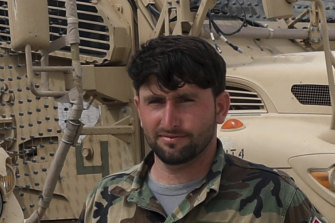 An Afghan army soldier walks past mine-resistant ambush protected vehicles that were left after the American military left Bagram air base on July 5. Credit:AP

Biden said he did not believe it was inevitable that the Taliban, an extremist Islamic group, would again seize control of the country because the Afghan army was well-equipped and well-trained.

Biden addressed head-on the arguments of those who say the US is leaving Afghanistan too soon.

He said those calling for a six to 12-month extension of the US military presence were ignoring the lessons of the past 20 years.

Such extensions, Biden said, had repeatedly proven not to be a solution but a “recipe to remain there indefinitely”.

He said his capacity to manoeuvre was limited by the fact the Trump administration struck a deal with the Taliban to leave the country by May.

Biden said that had he announced a substantial extension of the US military presence, US troops would have come under assault from Taliban fighters and casualties would have resulted.

As for those calling on the US to remain indefinitely, Biden asked: “How many thousands more American daughters and sons are you willing to risk?

“How long would you have them stay? Already, we have members of our military whose parents fought in Afghanistan 20 years ago. Would you send their children?”