FATE OF THE YONGALA 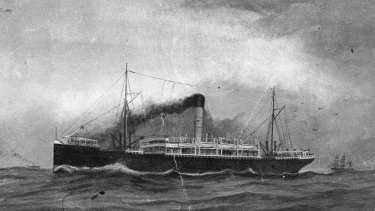 The SS Yongala, which sank in a cyclone near Cape Bowling Green, south-east of Townsville, in 1911.Credit:Australian National University

Beyond all doubt the steamer Yongala has me with sudden and overwhelming disaster. New was received yesterday that cargo identified as having being stowed in one of her lower holds had been washed ashore at Cape Bowling Green, and recovered by the light house keeper there.

Had it been deck cargo hope for the vessel’s safety would still be high; but only the breakup of the steamer could account for lower hold cargo being afloat. Subsequently evidence accumulated that the ship had been overwhelmed, further wreckage, including some of the Yongala’s fittings, being found.

The Yongala, every maritime man of experience thinks, has torn her bottom out on the rocks, and sunk in deep water with every soul aboard. To launch a boat in the hurricane raging when the disaster occurred would have been impossible.

The wreck is the worst as far as mortality is concerned on the Queensland coast. It is believed that in all there were 122 persons aboard. This exceeds the loss of life on the B.I.S.N. Co’s steamer Quetta, which was wrecked in 1899 off Cape York when 130 people drowned.

“Fear the worst.” These words were contained in a message received this afternoon by the local manager of the Adelaide S.S. Co. from Brisbane. The office message was marked Urgent, and contained the information that two bags of chaff, two of pollard, one of bran and one of pumpkins had been picked up at Cape Bowling Green a mile along the beach by the light house keeper, and the marking were identical with cargo shipped in the lower hold of the Yongala at Brisbane.

Little hope is now held out of the safety of the Yongala.

The Sydney representatives of the company, who all along were inclined to believe that the delay in the ship’s arrival was due to a breakdown of machinery, now fear that the Yongala met her hate in the cyclonic storm which raged along the Queensland coast.

So far there is no news of passengers and crew.

Chief Officer R. S. Millington, of the steamer Guthrie, which passed through the centre of the cyclone on the Queensland coast, stated today that there was no doubt the Yongala passed through Whitsunday Passage, and then fell in with the cyclone. In such a storm the weather would be very thick, and in such circumstances no man living could navigate a waterway inside the Great Barrier Reef.

After clearing Whitsunday Passage it was a mass of reefs. From Dent Island, where she was last seen, was about 100 miles to Cape Bowling Green, where her cargo was washed ashore. If she had gone he would say it was on a patch of reefs about 23 miles north-east of Cape Upstart, to the southward of Townsville. She had doubtless gone on the Barrier Reef somewhere.

If she struck anywhere it would be utterly impossible for Captain Knight (of the Yongala) to know his true position in the very thick weather she must have met. In the Guthrie they had a terrible time for a while.

“Why,” added Mr Millington, “in the worst of the storm we experienced a current of at least nine knots in strength setting north-east, and had out cables parted, we would have been on the reef too. No doubt the Yongala out in the open found it impossible to anchor. Nobody knows how the current runs in a cyclone, but it is very strong, even where we were in a sheltered position. No, I am sure that under cyclonic conditions no man living could safely navigate a ship inside the Barrier Reef, and if the Yongala is gone, as she appears to be, it must have been on part of the treacherous reef.”