Crowd Stand in Rain for Service

In the smallest churches of the outback, in the great cathedrals of the cities, Australians met yesterday to pay their last respects to the late King George VI in solemn services of remembrance.

In the King’s Hall of Parliament House, Canberra, the Prime Minister of Australia, Archbishop Mowll, delivered his panegyric of the late King before a widely representative gathering of Australian people.

In other capital cities, in the provincial cities, the townships, and the scattered settlements, churches were everywhere packed as devout people farewelled a beloved King.

The supplicating lines of the late King’s favorite hymn, Abide With Me, echoed across the Commonwealth. On the occasion its stirring words were clothed in deeper significance. 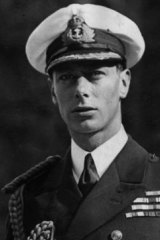 Bowed under umbrellas in pouring rain, thousands of devout citizens remembered the King at the service on the steps of Parliament House.

Rain was falling long before the service began but hundreds came early and lined the street barriers. Others waited under shop verandahs.

At arms reversed four servicemen guarded the flag-draped cenotaph and the rain pattered down on wreaths and flowers amassed around it.

In detachments came the Air Force, the Army and Navy to form up below the steps. The Speaker of the Legislative Assembly (Sir Archie Michaelis) placed the first wreath.

Then, at three-minute intervals, came the President of the Legislative Council (Sir Clifden Eager), the Lord Mayor (Cr. Nilsen), the Minister for Labor (Mr Holt), representing the Commonwealth Government, the Premier (Mr McDonald), and Lady Brooks.

At 2.57 the Lieutenant-Governor (Sir Edmund Herring) placed his tribute at the cenotaph.

The service was conducted by the Archbishop of Melbourne (Dr. J J Booth), and from a dais draped in purple and black Sir Bernard Heinze led the singing

Amplifiers relayed voices of the choir, hundreds strong, and the rain-soaked crowd joined in.