Fix the leaks before hitting us with hosepipe bans! Frustrated Brits demand action as water firms order them to restrict usage but continue to waste TWO BILLION gallons a day

Seven water firms across England and Wales have already declared a hosepipe ban or start dates for the restriction, which will affect more than 30 million people.

The bans are coming into force as an official drought has been declared in parts of the south, south west and central England and the east of the country.

People on social media, however, are becoming increasingly angry that while their own personal water usage is being capped, huge water leaks from pipes owned by the ban-imposing companies are taking weeks at times to fix the issue. 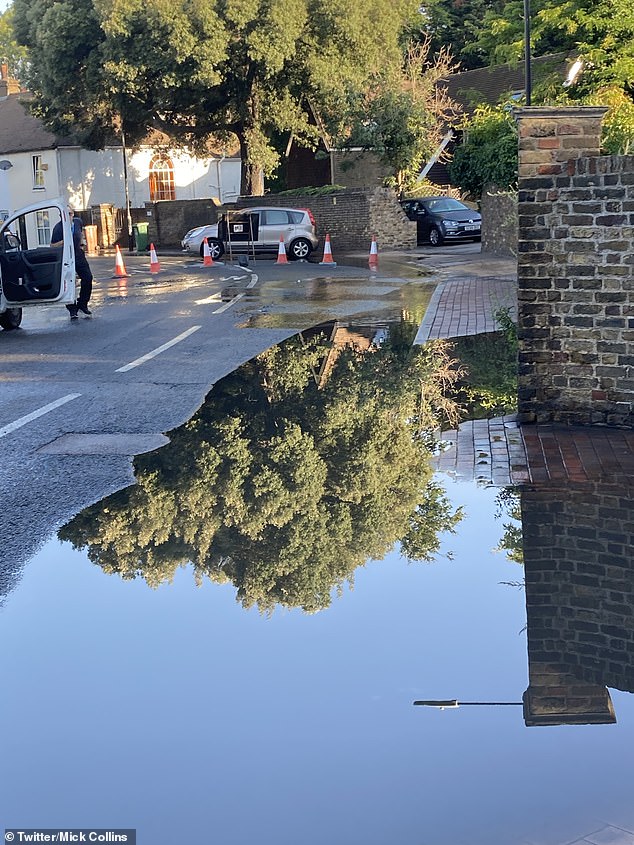 One man on Twitter posted photos of a large leak after a pipe burst at a time when there is ‘lots of talk about saving water’. Thames Water will put 15 million people across the south east under a hosepipe ban within the coming weeks. It comes as an official drought was confirmed.

More than 15 million people across the Thames Valley region will be hit with the ban on using hosepipes and sprinklers in the coming weeks – the water company giant is yet to confirm an official start date.

Earlier this week Thames Water admitted that despite trying to be ‘efficient’ with water usage, like the Germans and the Danes, the company loses more than 635 million litres of water a day.

Londoner’s have slammed the water company for not fixing huge leaks.

One man filmed a leak on his road that had been ongoing for more than a week.

In the video he shows the water that had ran down the road from the source, where there were two weeks.

He said that Thames Water said they would come and fix the leak on August 8 – but four days later they still had not come.

He said: ‘Even though they called for a hosepipe ban because of the water shortage and the continued heat wave, we still have this.’

Currently around two billion gallons of water are wasted across the UK each day – 20 per cent of the country’s entire water use.

There are fears that hosepipe bans could last until October as a result of ‘no meaningful rainfall’ being forecasted.

Temperatures over the weekend are expected to soar to over 36C, with many parts of England facing a ‘level three’ heat alert. 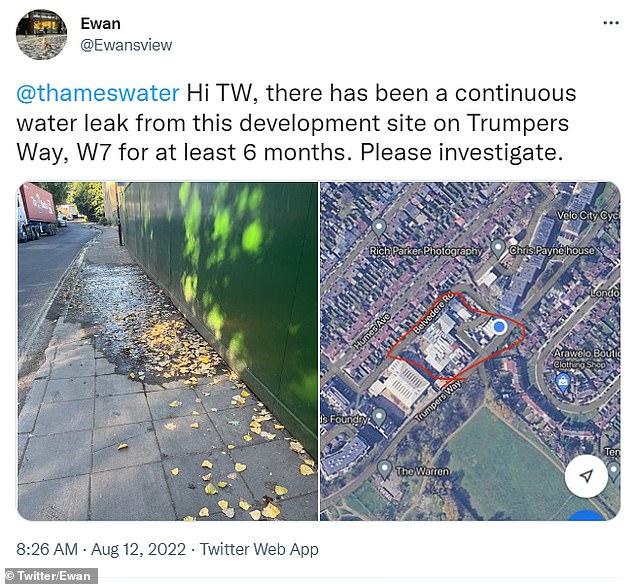 One leak in Hanwell has claimed to have gone on for at least six months, creating calls for Thames Water to investigate the problem.

The temporary ban will begin on August 26 and anyone caught breaking the ban could be fined up to £1,000.

But people from Yorkshire have taken to Twitter to call on the company to fix the leaks leading water to run onto their roads before stopping residents using their hosepipes. 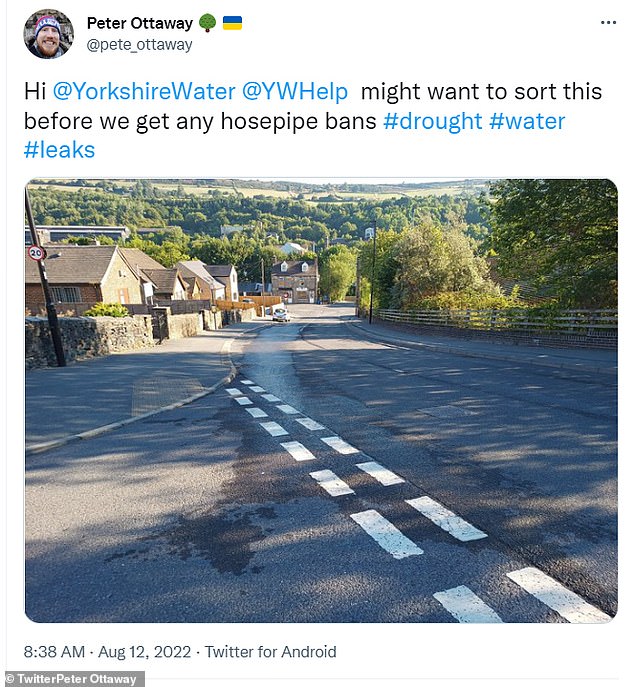 Another woman added that it was ‘disgraceful’ that Yorkshire Water had decided to impose a hosepipe ban when a leak near her home had not been fixed for more than three weeks.

The video shows part of a road cordoned off with yellow barriers, with a blue arrow painted on the ground pointing to where the leak is.

Although maintenance work looked like it had taken place, the water was still dripping onto the street.

In Kent and Sussex, 1.4 million are already under restrictions as a result of the South East Water ban that began today.

When a hosepipe ban is in place, people are not allowed to connect their hose to the mains water supply.

This means people will be banned from using a hosepipe to fill up paddling pools and swimming pools, cleaning the walls or windows of your home and washing cars.

One woman on Twitter said: ‘Bit confused how you can let this leak continue from 1:30am this morning but still introduce a hosepipe ban from Friday.

‘If there is such a shortage of water shouldn’t we be stopping all leaks asap.’

Her video shows water spilling out of a pipe onto the road and flooding a nearby pavement.

Another showed a leak on Sittingbourne High Street in Kent.

The woman who posted the video claimed that at least 40,000 litres had been lost  since the leak began.

A week ago, people in South Hampshire and on the Isle of Wight as well as the Isle of Man had the ban imposed upon them under Southern Water’s new restrictions – but leaks are still taking ‘several weeks’ to be fixed.

People in Pembrokeshire’s water use will be limited from August 19 Welsh Water announced.

One woman in Wales shared a video a drain over flooding and asked Welsh Water how they expect the public ‘to care’ about water waste ‘when the company that manages doesn’t.’ 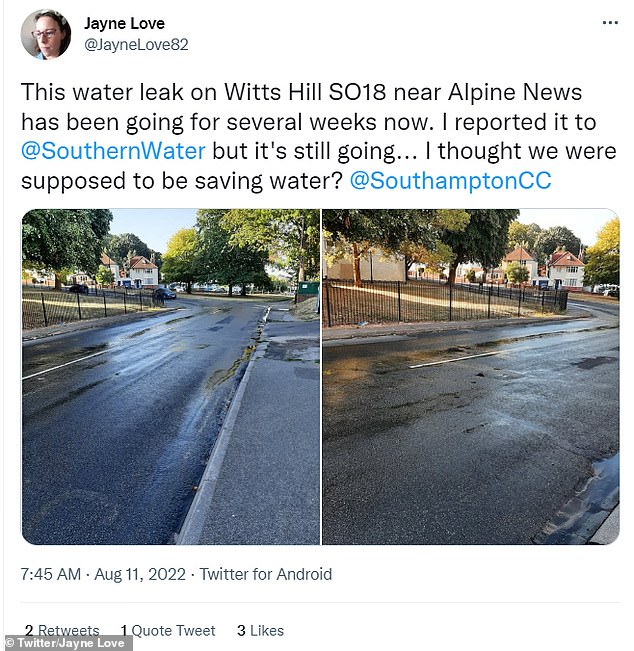 Southern Water put people in Hampshire and the Isle of Wight on a hosepipe ban last week. One woman questioned how one water leak had continued for a number of weeks without saving water at a time when ‘we are supposed to be saving water’. 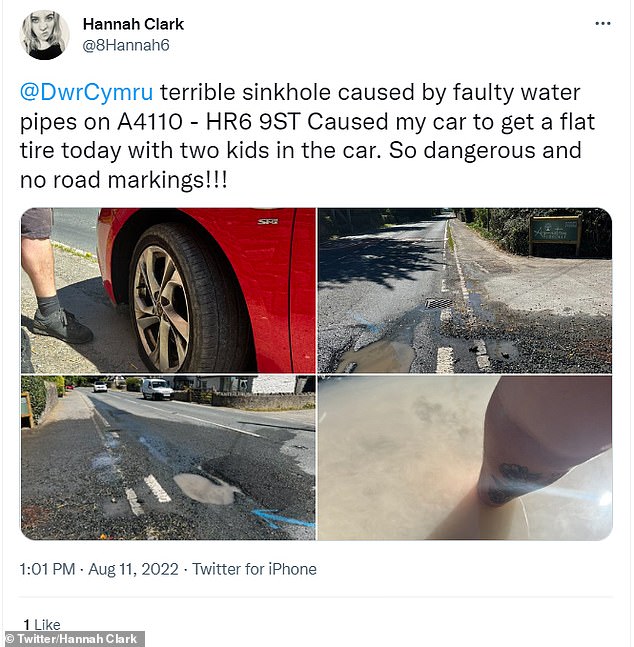 In Wales, one person said that a faulty water pipe had even caused a sinkhole on the side of the road.

The bans are being put in place after some parts of England experienced the driest July since records began and reservoirs fell to the lowest levels in 30 years.

Critics have called for the bosses of water companies not to get paid bonuses until they fix the mains leaks that are resulting in billions of litres of water from being wasted each day.

The Liberal Democrats and The River Trust charity want the Government to ban water company executives from getting an extra cash boost until the holes in leaking pipes are confirmed.

Analysis of Companies House records by the Lib Dems shows executives at England’s water and sewage firms earned £48million in 2020 and 2021, including £27.6million in bonuses, benefits and incentives.

Southern Water, which brought in a hosepipe ban on Friday, paid its executives £3.4million in bonuses, despite having pumped raw sewage into rivers and failed to fix leaking pipes. 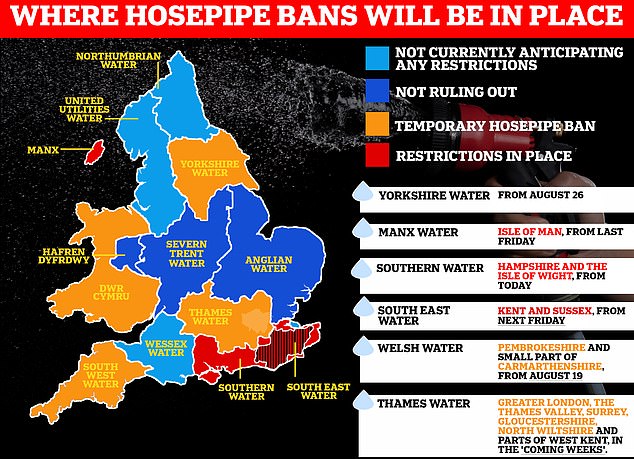 The National Drought Group – made up of Government and agency officials, water companies and other groups such as the National Farmers’ Union (NFU) – is set to meet tomorrow to discuss the prolonged dry weather

Thames Water, which is threatening to bring in a hosepipe ban, has been caught up in a row about its failure to run a £250million desalination plant designed to deliver up to 100million litres of water a day during droughts. Its executives were paid around £5million despite the failure.

At the weekend, the firm, whose boss Sarah Bentley earned around £1.25million in pay and bonuses last year, asked Londoners to save water by taking shorter showers.

South East Water has brought in a hosepipe ban for some customers in Kent and Sussex and paid its bosses almost £646,000 in bonuses and benefits over the past two years.

Lib Dem rural affairs spokesman Tim Farron said: ‘It is outrageous that whilst millions of people suffer from hosepipe bans, water company execs reward themselves with bonuses despite not even bothering to fix leaks. What on earth have they done to deserve these bonuses?

‘Ministers are letting water firms get away with scandal after scandal. The public are sick of it. It is time someone stood up to these companies and demanded action. That should start with fixing these leaks, and then once and for all ending sewage pumping into waterways.’ 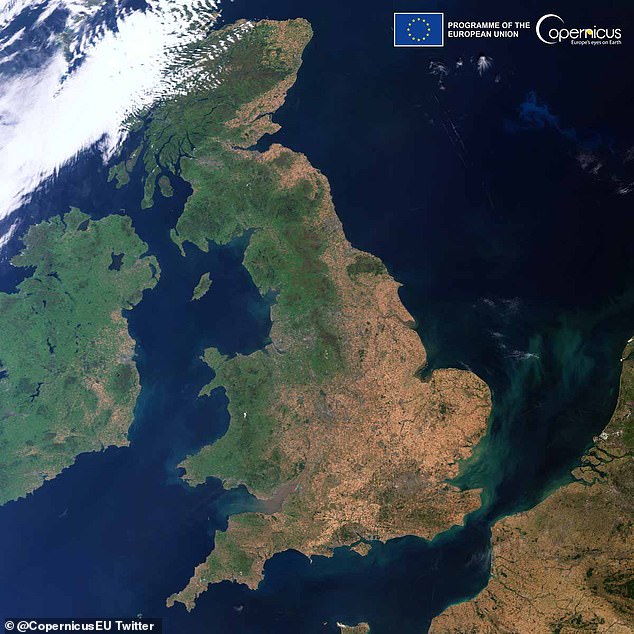 Christine Colvin, of The Rivers Trust, said promising to reduce leaks by only 50 per cent by 2050 was ‘ridiculously unambitious’.

She added: ‘What constitutes good performance by water companies?

‘They are really being rewarded for financial performance and their awards are not being linked to environmental performance.’

Water companies have only promised to halve leaks by 2050, despite predictions of a rise in droughts. Last month was the driest July in England since 1935, with just 35 per cent of its average rainfall for the month, while Wales only got 53 per cent.

In response to the complaints on social media, water companies have said that they are continuing to work on the leaks alerted to them by members of the public.

A spokesperson for Southern Water said: ‘We would like to thank members of the public who report leaks to our network either by calling us, via social media, or via our website.

‘We fix hundreds of leaks every day – 22,500 last year alone – working day and night to detect and repair pipes across an enormous network. These are prioritised according to severity. Visible leaks often do not lose as much water as hidden leaks on larger pipes buried deeper underground.

‘We’re investing heavily in intelligent network technology to help us locate leaks faster, but customers still provide a vital service by alerting us.’ 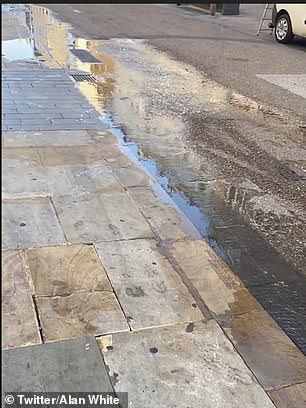 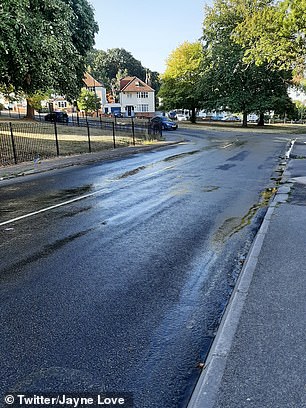 Hosepipe bans will be place for more than 30 million people across England and Wales by the end of the month. But water companies are still coming under fire for not fixing leaks that are resulting in TWO BILLION litres of water being wasted each day.

A spokesperson for Yorkshire Water said: ‘Reducing water lost through leaks is one of our key priorities, we have reduced it by 50 per cent since our last hosepipe ban in 1995/6 and we are aiming to reduce it by a further five per cent by 2025.

‘We’re working hard to fix leaky pipes all year round – this summer we also have extra people in our field teams and have adopted a seven-day working pattern so that we can find and fix leaks quicker.’

A Thames Water spokesperson said: ‘We know it’s not acceptable to be losing so much precious water but we’re doing something about it and our shareholders have recently approved an additional £2billion into the business so we can improve outcomes for customers, leakage and river health.

‘It’s not going to be quick, but we’re making progress and we’ve met our target to reduce leakage for the last three years, reducing the amount of water lost by 10.2 per cent since 2019/20.